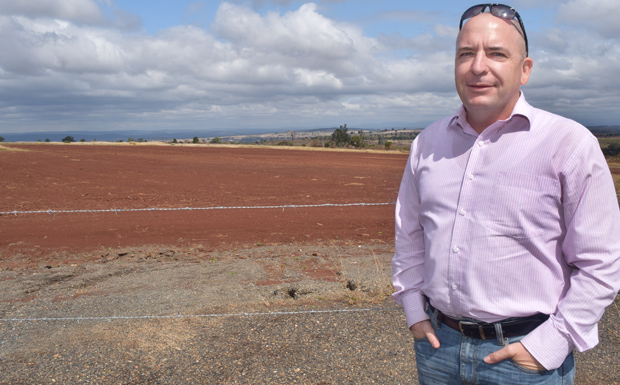 Jason Elks, from Moreton Resources, near the site of Moreton’s proposed Kingaroy coal mine … the company has announced it has secured another $1 million in funding

Moreton Resources – the company planning to develop a coal mine on the outskirts of Kingaroy – has secured an extra $1 million in financial backing.

The company lodged an announcement about the refinancing with the ASX on May 29.

“As the market is aware, First Samuel has been a long-time supporter of Moreton Resources Limited and as such, continuing its already three years journey with the company, the company has negotiated an additional $1 million in funding which will further enhance the ramp up of operations as we move past the commissioning phase and into steady state production of silver at its fully owned subsidiary of the Granite Belt Project, under the MRV Metals Pty Ltd banner,” the statement read.

The statement also noted the new funding would also support the advancement of plans by its other subsidiaries, including MRV Tarong Basin Coal Pty Ltd.

This is the subsidiary linked to the Kingaroy mine development.

In early May, Moreton predicted it would start making profits in “late May, early June”.