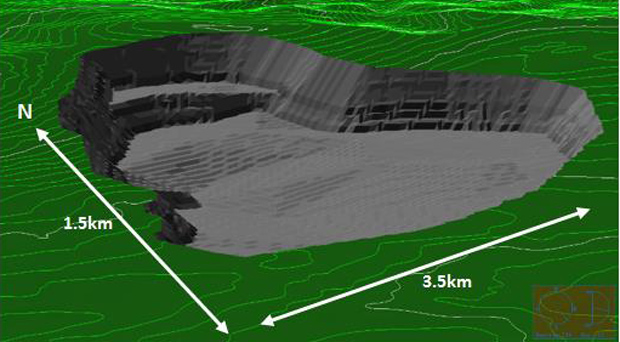 The original mine concept by Moreton Resources for an open cut coal pit near Goodger
(Source: MRV)

Moreton Resources released a statement to the ASX on Friday saying the coal at its proposed Kingaroy coal mine could be potentially “one of the lowest CO2 emitting coals in Australia”…  if mined selectively.

The statement, from the Moreton Resources Board, continues: “… the potential product being identified in the South Burnett Coal Project as one of the superior coals throughout Australia”.

“Early indications support the mine plan review being undertaken … which is currently underway and is expected to be finished in March 2018,” the statement continued.

“Selective mining and working section selection has the potential to half the overall ash content and significantly increase calorific values, whilst reducing the overall targeted coal reserves.”

The ASX statement said the majority of the 660 “historic” sample holes across the area had been tested on a “composite sample basis”, ie across the top to bottom of the coal seam.

“Consequently the overall ash content is over represented whilst the calorific values understated, compared to a selective mining operation targeting low ash coal sections within coal seam,” the statement continued.

It cited as an example, a hole testing a 32.6 metre coal seam.

The company suggested a “selective mining” approach to this seam, with a minimum working section of two metres.

“This approach (selective mining and working section selection) could result in up to 50 per cent reduction in ash throughout the deposit.” the statement said.

“Since 2015, we have been aware of the potential of this asset, however we have been limited by inconsistencies in historic data and methods used for sampling of those historic holes, and by the level of rigor that is required by the JORC code to fully inform the market.

“We now believe we will have sufficient new data and sufficient comparative data from prior ply by ply holes, to remodel and develop a robust mine plan moving forward.”

Moreton Resources’ shares closed at 0.011 cents on Friday, up .001 cent from Thursday.