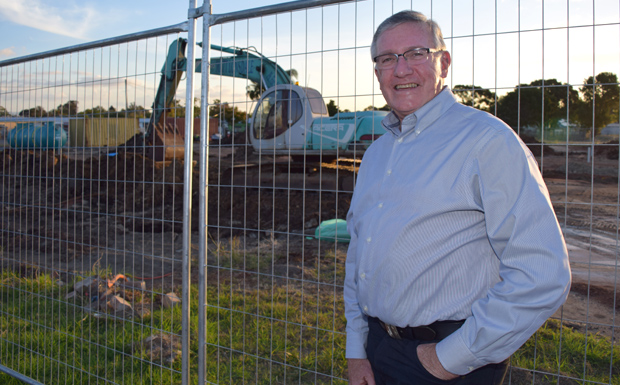 Outgoing South Burnett mayor Keith Campbell has congratulated Brett Otto on his poll success ahead of the official declaration of election results.

Officially conceding, the former Kingaroy Shire and South Burnett councillor admitted he was disappointed, saying it was difficult to leave something he loved doing.

However, he congratulated the Mr Otto and the incoming councillors and wished them well.

Keith Campbell was first elected to Kingaroy Shire Council in 1999 and then to the newly amalgamated South Burnett Regional Council in 2008.

He served as Deputy Mayor before being elected Mayor at the 2016 Local Government elections.

He released the following statement to the media on Wednesday morning:

The commitment I made to serve two terms as mayor has not been accepted by voters.

My approach in this election was to celebrate the achievements of the South Burnett and continue to be positive about the future and build economic growth.

Since amalgamation we have seen a change of mayor at each election, two voluntarily and myself involuntarily.

While I am disappointed that my approach was not sufficient to convince enough voters to ensure a continuation of stable local government, particularly during these very challenging times of COVID-19, I have no option other than to accept the decision.

I congratulate and wish incoming mayor Brett Otto well in his role as well as the new team of councillors.

Congratulations to each of you.

I want to also acknowledge the efforts of Cr Terry Fleischfresser who has been replaced by Cr Kirstie Schumacher and Cr Ros Heit who was replaced by Cr Hook Henschen and I wish to congratulate Crs Duff and Potter on their campaign successes.

Crs Jones and Frohloff were unchallenged which exhibits the support their divisions have toward them.

I want to say that holding the position of mayor has been a great privilege and honour.

My wife Marion and our family join with me to thank the South Burnett for this distinction to work for you and with you, to lead Council during the past four years and to achieve a number of great accomplishments.

In particular, thank you to all people who had confidence in my leadership and voted for me.

It’s difficult to say goodbye to something that you love doing.

I’m very proud of what the past term of Local Government delivered for the South Burnett and perhaps in time those will be remembered as having improved our region for the long term.

This was achieved by building a solid partnership between councillors, the CEO and senior staff, with the stand out achievement being the strengthening of your Council’s financial position and overall improved performance across the breadth of Council operations.

Mayor Otto inherits a much stronger financial position than any Council mayor since amalgamation.

I am confident that I leave the position of mayor with the South Burnett in a better position now than it has been since amalgamations 12 years ago.

I have been honoured to work with each council team since amalgamation to improve the infrastructure, facilities and services that each town has.

I wish the new team well.

Mr Campbell, the former General Manager of Bean Growers Australia, has held a number of other community roles over the years.

At 9:30am on Wednesday, the Electoral Commission of Queensland still had not officially declared the results of the recent Mayoral poll.