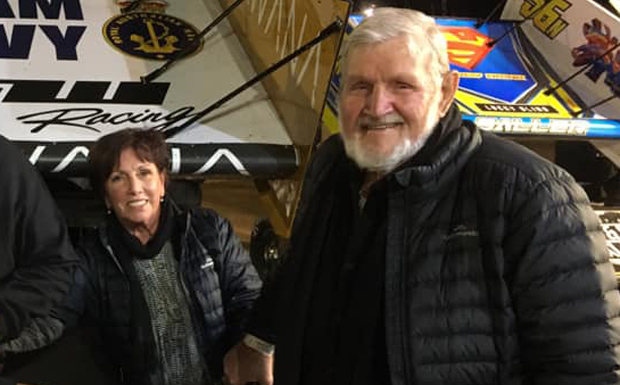 Toowoomba Deputy Mayor Cr Carol Taylor with her husband Roger at the speedway in Toowoomba in May last year (Photo: Facebook)

Roger Taylor – husband of Toowoomba Deputy Mayor Carol Taylor – has died in a Brisbane hospital from complications caused by a snake bite.

Mr Taylor, 76, was bitten on January 10 by what is believed to have been an Eastern Brown while removing tree netting on his family property at Vale View, south of Toowoomba.

Not realising he had been struck by a snake, he drove into Toowoomba to attend a friend’s birthday party.

However, he collapsed soon after arriving, striking his head as he fell.

Ambulance paramedics treated Mr Taylor at the scene and he was transferred to Toowoomba Hospital.

However, his condition deteriorated and he was flown to the Princess Alexandra Hospital in a critical condition for emergency surgery.

He died on Saturday after falling into a coma.

Toowoomba Mayor Paul Antonio has extended his deepest sympathy to the Taylor family.

Mayor Antonio said he and all of the Toowoomba Regional Council were saddened by the tragic loss.

“On behalf of Council, and the broader community, I would like to wish his wife Carol, her family and friends our sympathy.

“Roger was an active businessman, a fine family man and well-respected member of the community.

“He has been a massive part of this region for a long time and there is no doubt that his loss will be felt.

“During this time, our thoughts and prayers are with Carol, and their extended family.

“While this will no doubt be an incredibly difficult period for the family, the community support has meant a great deal to Carol. In trying times such as this, the family is truly grateful for the love and support they have received.”