Council To Take Over Brighthaven 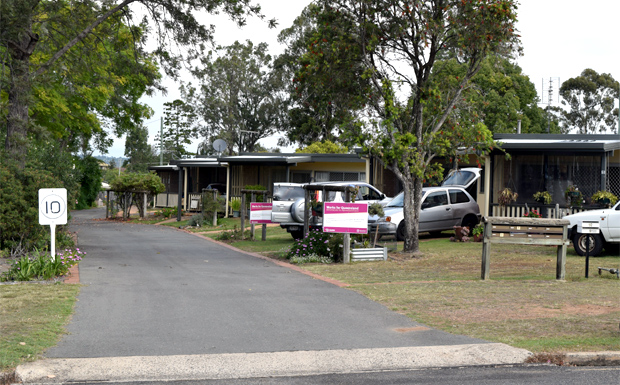 The Brighthaven unit complex at the corner of Cairns and Alfred streets, Nanango … Council will buy out the State Government’s share of the property for $220,000

South Burnett Regional Council will buy out the State Government’s interest in Nanango’s Brighthaven units, ending a partnership that has lasted almost 30 years.

The 10 single Alfred Street units were jointly developed by the former Nanango Shire Council and the Department of Housing and Public Works in the early 1990s to provide affordable accommodation in the town.

The SBRC inherited Brighthaven, along with similar properties in Murgon, during the 2008 Council mergers.

At Wednesday’s SBRC monthly meeting, councillors were told the Department had offered to sell its interest in the Brighthaven complex for $215,963.30.

This amount was calculated on March 6 but the final buy-out figure would be subject to a CPI adjustment prior to settlement, they were told.

Mayor Keith Campbell said there would be no affect on Brighthaven’s existing tenants, who would continue to pay rent to Council as usual.

However, the transaction would give the Council complete ownership of Brighthaven which meant Council would no longer need to seek the Department’s approval for any future changes to the property.

Councillors voted unanimously to approve the buy-out, with officers noting the final price was not expected to differ significantly from the March 6 quote.

Cr Gavin Jones said the decision would clear up another “messy item” the Council had inherited from the 2008 amalgamation.

Mondure Rural Fire Brigade will be able to add a meeting room and training facility to its shed on Kawl Kawl Road.

The brigade had applied to Council for permission to occupy the adjoining Lot 4 so they can expand their building, which is on Lot 3.

They also requested a 22-year lease on the property at a peppercorn rental to align with the lot’s expiry date.

Officers noted Council would make nothing from the transaction, but recommended Councillors approve the request because the Public Safety Business Agency would pay the cost of preparing a lease and supplying any other necessary documentation.