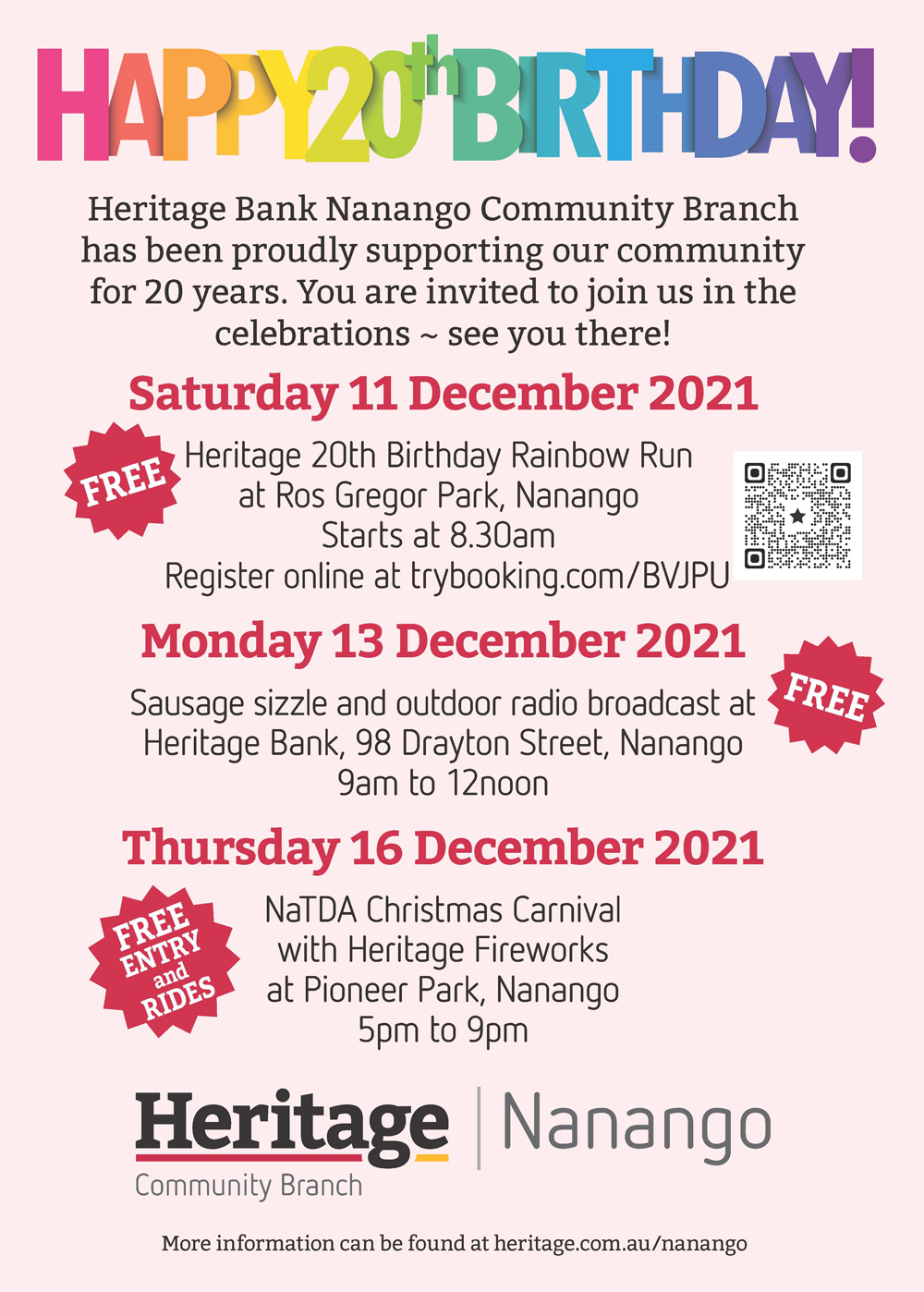 Nanango’s Heritage Bank Community Branch is celebrating its 20th birthday … and it has some special treats in store for the local community!

On Saturday, Heritage is hosting a free Rainbow Run at Ros Gregor Park in Nanango from 8:30am.

The first 200 people to register will receive a free shirt at the start line to display the rainbow colours gathered at intervals along the short course.

There’ll be no winners or official times, just fun and colour to celebrate the Nanango community!

Then on Monday (December 13), residents are invited to pop on down to Drayton Street from 9:00am to noon to enjoy a free sausage sizzle outside the Heritage Bank.

But the biggest treat has been reserved for the annual NaTDA Christmas Carnival in Pioneer Park next Thursday (December 16)!

There’ll be free rides and a massive fireworks display, sponsored by Heritage.

So why all the fuss about a business celebrating a birthday?

Rewind to 2001. The big banks were pulling out of Nanango … Nanango residents were worried the loss of these banks would have a flow-on effect to many other businesses in town.

One of the residents who was very worried was Wendy Zerbst.

“When banking services are degraded, people have to travel,” Wendy said.

“And when they travel, they take their shopping money with them. They shop out of town and disconnect with the local community.”

The idea of starting a community bank based in Nanango was born.

A team of eight professionals – including an accountant, business owners, ex-bank manager, a solicitor and even a dentist – began to work on turning the dream into a reality.

Their first meeting was in Bob Head’s real estate agency.

The group started raising capital from local residents, who became the initial shareholders.

Nine months later the Community Branch opened, and since then it has become the heart of the Nanango community.

Community banks have a simple model: the more money that is deposited with the branch, the more funds can be distributed back to the community.

Half of all profits from the Heritage Bank Nanango Community Branch are distributed back to the Nanango community via HNCF in the form of grants.

An incredible $4.5 million has been given back so far.

Projects have included Heritage Lodge, a residential facility for people with disabilities, built in Nanango as a joint project with South Burnett CTC and the South Burnett Regional Council.

Clubs and societies, rural fire brigades and many events have also benefited over the years from grants or sponsorship from Heritage.

Recent projects include the All-Abilities Playground at Butter Factory Park built in conjunction with Council and community fundraising.

HNCF chair Wendy Zerbst has been with Heritage right from those early days in Bob Head’s kitchen.

She says there would barely be a person in Nanango who hasn’t been touched in some way with funding from HNCF over the past 20 years.

About $220,000 a year is invested back into the Nanango community.

And that’s a pretty good reason to celebrate with a colour run, sausage sizzle and fireworks!