It was the case of third time lucky for Kingaroy’s much-discussed revitalisation with the announcement on Friday the Federal Government will be contributing $4.5 million towards the $11.3 million project.

Federal Agriculture Minister and Member for Maranoa David Littleproud announced the funding at Kingaroy Town Hall in front of an audience of Councillors, council staff and media.

“This is important for the town, to revitalise the CBD and give a sense of pride,” Mr Littleproud said.

“We need this to happen sooner rather than later, because this country is in a recession and you’re going to help us get out of it.”

Mr Littleproud said the transformation would lead to improved safety for both vehicles and pedestrians, improved lighting and create a lively and interesting shopping experience in the main street.

“The South Burnett has been hit with hard times through the drought and this project is all about putting some new energy into the town which has the potential to attract more residents, businesses and professionals,” he said.

The funding has been released under Round 4 of the Building Better Regions Fund (BBRF).  The project had been knocked back twice before for Federal funding.

Mr Littleproud said there had been $207 million available in this round with applicants competing for the funding.

A total of $21.3 million had been approved for projects in the Maranoa electorate, including the $4.5 million for the South Burnett Regional Council.

“I can assure you it was all on merit. There were no colour-coded spreadsheets,” Mr Littleproud joked.

He said he had now secured more than $45 million through BBRF projects in the Maranoa electorate since 2016.

South Burnett Mayor Brett Otto said it was a wonderful day for the region.

He thanked Mr Littleproud and the Federal Government for supporting rural and regional Queensland.

Mr Otto also acknowledged the work of the previous South Burnett Regional Council, and in particular the leadership of former Mayor Keith Campbell.

“If it wasn’t for Keith and the work that he did with his team, we probably wouldn’t be standing here today,” Mayor Otto said.

“This is a once in a generation project which will transform Kingaroy as a regional centre and provide direct benefits, not just to Kingaroy, but to the entire South Burnett region,” Mayor Otto said.

“The transformation project will provide significant social and economic benefits including underpinning population growth for Kingaroy and other townships right across the South Burnett.” 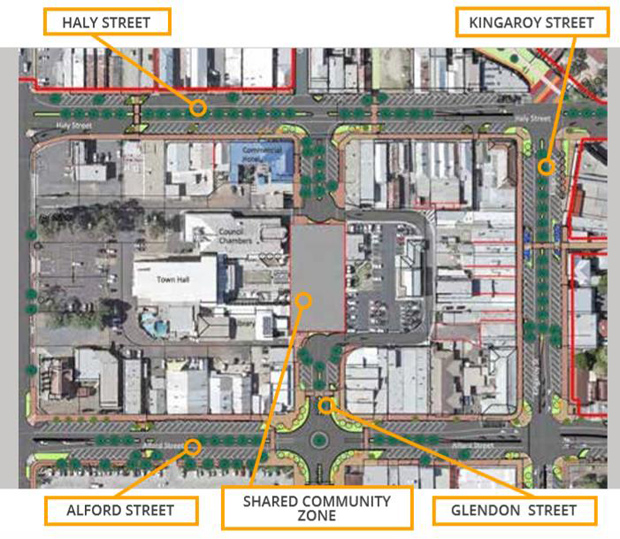