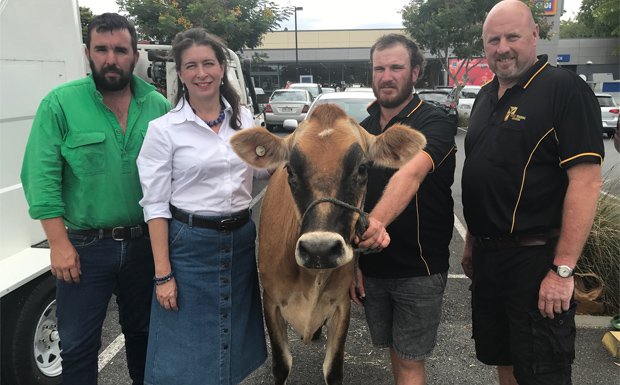 LNP Senator Susan McDonald has urged Coles and Woolworths – and the milk processing companies that supply them – to explain publicly why Queensland farmers are paid less for their milk than it costs to produce.

Speaking at a press conference in Canberra on Wednesday morning, she asked the supermarkets and processing companies to attend a public hearing to explain the criteria they used to set prices.

The demand for answers follows letters she wrote this week to the heads of the big two supermarkets, asking them to stop selling cheap milk and pay farmers a fair price.

The Federal Government is currently finalising a Dairy Code of Conduct that aims to protect dairy farmers from unscrupulous supply agreements but Senator McDonald has urged the supermarkets to pre-empt the Code and lift their prices.

“While farmers have been publicly suffering, the silence from Coles and Woolworths has been deafening,” she said.

“These supermarkets constantly advertise how virtuous they are by sourcing ethical coffee, dolphin-free tuna and RSPCA-approved chickens, but the farmers and the Australian public deserve to know what ethical standards are being applied when Queensland’s dairy industry is being pushed to the wall by shameful buying practices.

“If Coles, Woolworths and processors refuse to appear at the public hearing in Canberra, then they will send a strong message that they don’t care about farmers, they’re happy for Queensland’s dairy industry to sink and they’re happy for people to lose easy access to local, fresh milk.”

Senator McDonald said she was recently made aware that negotiations between processor Lactalis and southern Queensland farmers’ co-operative Premium Milk had broken down because Lactalis refused to offer a price for milk above the cost of production.

“Prior to $1-a-litre milk being introduced on Australia Day 2011, Australian consumers were paying $1.35 per litre for milk. I note our New Zealand neighbours are currently paying a shelf price of $AUD 2.20 per litre for fresh milk,” she said.

“Eight years of milk price wars has allowed supermarkets and processors like Lactalis to engage in disgraceful conduct that is hurting farmers, their families and the regions they live in.

“Coles and Woolworths need to do the right thing and end this ridiculous milk price. Consumers have indicated they will pay more for milk so that farmers can stay afloat. I say, listen to them and raise your prices now, or come to Canberra and explain why you won’t.”

Senator McDonald has called on the Rural and Regional Affairs and Transport references committee to hear from the retailers and processors – Coles, Woolworths, Aldi, Lactalis and Lion – at 5:00pm next Thursday in Canberra.