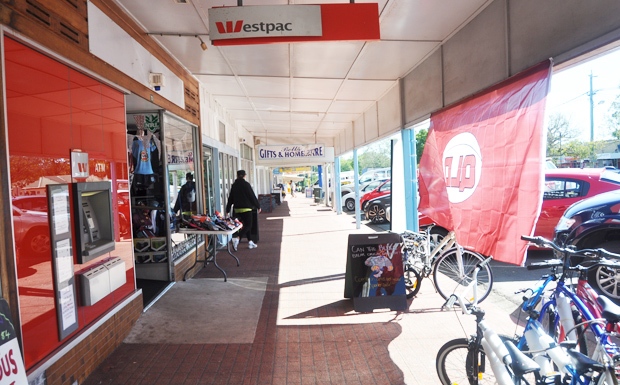 A 2014 plan to upgrade Murgon's CBD footpaths is still in the works, but it has been delayed by the South Burnett Regional Council's renewed focus on roads

Work on upgrading the footpaths was originally planned to take place in 2014, but the project had to be put on the back-burner when urgent repairs needed to be made to Murgon’s ageing Jubilee swimming pool.

The pool was later demolished and replaced with a modern $1.2 million aquatic centre.

After the new pool opened in late 2015, it was hoped work on the footpaths could proceed in 2016.

But after the March 2016 Council elections, all surplus funds were diverted to road repairs and upgrades and the project had to be deferred again.

Cr Duff told the meeting new costings to upgrade the CBD’s footpaths were being sourced, and Council was also looking for grants to help the project along.

So the issue has not been forgotten, just delayed.

The MBDA and the Burnett Inland Economic Development Organisation (BIEDO) have taken out reciprocal membership with one another.

After running a successful Open House Business Expo at Durong in March, BIEDO’s next major public event will be a Women In Ag day at Mondure Hall on April 29, in conjunction with the Burnett Mary Regional Group.

The day is aimed at women who work in agriculture and will run from 8:30am to 3:00pm.

A variety of informative guest speakers will be talking at the event, and morning tea and lunch will be provided at no cost. There will also be time to network and socialise, and various trade stands with an agricultural theme will be on hand, as well as an on-site coffee van.

BIEDO hope to be able to run an Open House Business Expo for Murgon in May, along with a grant writing workshop, Kristy said.

The MBDA have invited Member for Nanango Deb Frecklington to attend one of their monthly meetings in the near future to hear about local concerns.

Mrs Frecklington’s Nanango electorate looks set to expand to cover Wondai, Murgon, Goomeri and some areas further north after the State Government’s recent electoral boundary redistribution, while the seat of Callide will move out of these areas and into some parts of the Darling Downs formerly represented by Mrs Frecklington.

Long-standing local Member for Callide Jeff Seeney has also indicated he will be stepping down at the next State election after almost 20 years service to the seat.

MBDA President Leo Geraghty told the meeting Mrs Frecklington had already been in touch and was keen to make herself known to members.

South Burnett Mayor Keith Campbell gave an update to the MBDA about what has been happening in the region since last year’s Council elections, and what projects the Council has been working on outside its renewed focus on roads.

The Mayor said he recognized economic development was an important issue for the South Burnett, and he saw several positive signs.

The Coopers Gap Wind Farm, for instance, would employ at least 300 people during its two-year construction phase if it went ahead, and he was hopeful South Burnett businesses would be able to capitalise on that project.

And while tourism had been having a few flat years, the Mayor thought there were hopeful signs in that sector too – especially with the opening of the South Burnett Rail Trail later this year.

There had also been a small upswing in development applications to Council, and Mayor Campbell said these indicated the local business community was looking towards the future with optimism.

The Mayor said South Burnett Directions – the region’s peak economic development advisory group – would be refocused later this year to look at bigger projects, such as finding ways to get more water to the region’s farmers so they could break away from dryland farming and expand into more profitable areas of horticulture if they wished.

While work to map out trails, prepare brochures, put up signage and encourage appropriate businesses to put out the welcome mat for motorcyclists still remained to be done, she was confident this would happen in the near future.

Mr Smith has since formed a steering committee to oversee the project, and it will hold its second meeting at Kingsley Grove Winery on Tuesday, April 18.

“It’s sad to see the Girl Guides close, but I think the building is being put to good use and will be a great asset for our region,” Cr Duff said.

She also complimented the Murgon Saddlery on its move to a new location near Carney’s Feed Store at 125 Lamb Street.

“It’s really made that area a nice precinct and I’ve received positive feedback about the move,” Cr Duff said.

Cr Duff concluded by advising the meeting the Murgon Bowls Club are applying for funding to secure water tanks so they can reduce the cost of watering their greens, and Council recently installed new swings and play equipment at the Rotary Youth Park.

The Murgon Business and Development Association represents the interests of the businesses and community of Murgon and surrounding districts.