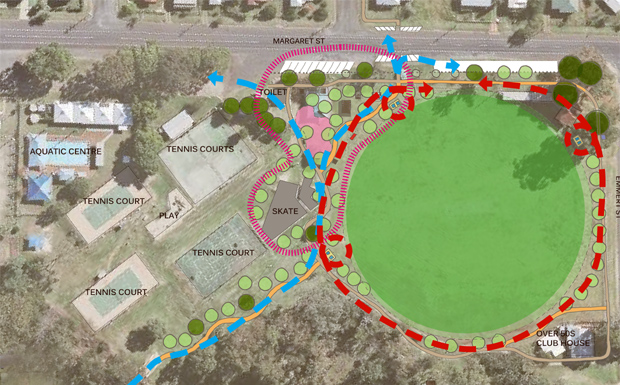 Toowoomba Regional Council's plans for the park upgrade include planting extra shade trees, linked footpaths, an exercise track, removal of fencing in place of bollards, extra seating, and the installation of a barbecue and covered picnic settings (Illustration: TRC)

Toowoomba Regional Council will carry out a major upgrade of Yarraman’s Errol Munt Park in 2017.

The park, which is located on Margaret Street in Yarraman not far from the CBD, is Yarraman’s largest park and is already home to the town’s aquatic centre, tennis courts and skate park.

It is also used by a range of community events which have included the Colours Of Yarraman Festival, the Yarraman Christmas Carnival and outdoor movie nights.

The Council concluded public consultations on its draft plans for the park on November 28, and is now assessing community feedback before committing to a final design.

In its first draft, the Council proposes removing fencing near the Over 50s Club on Emmert street and replacing it with pedestrian-friendly bollards and a shaded walkway along the park’s eastern edge.

It will also create three exercise nodes along a new 440m exercise track, each incorporating two exercise units, to encourage residents to use the park to stay fit.

The Council will build two metre wide linking footpaths so that the park is more easily accessible for those with mobility issues.

Extensive planting of shade trees along the park’s edges to provide more sun protection, and the relocation of an existing children’s play area further away from the road, are two other significant additions.

Parking areas in Margaret Street would be upgraded to include parking for recreational vehicles, and the installation of a barbecue, covered picnic settings and more platform benches to provide extra seating in the grounds are included in the draft design.

The plans for the upgrade cover the northern section of the park above Yarraman Creek.

The former Yarraman soccer grounds, which run along the southern side of the creek, are not covered by the new plan but are marked as an area for possible future use.

The final plan for the park is expected to be approved next year. 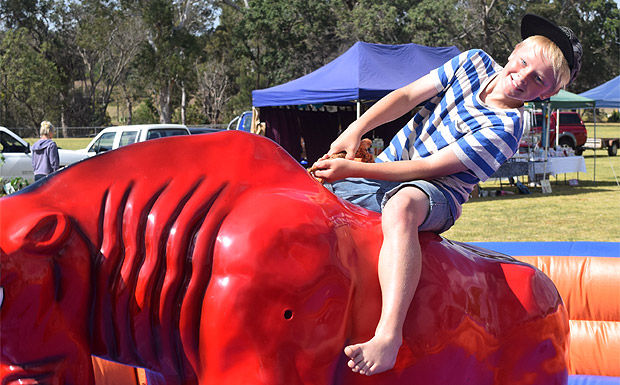 Errol Munt Park is already the home of many major annual events in Yarraman including the annual Christmas Carnival; the restoration of Yarraman Creek along the park's southern boundary over the last few years also draws a steady flow of visitors to the grounds

One Response to Meet The Future Errol Munt Park