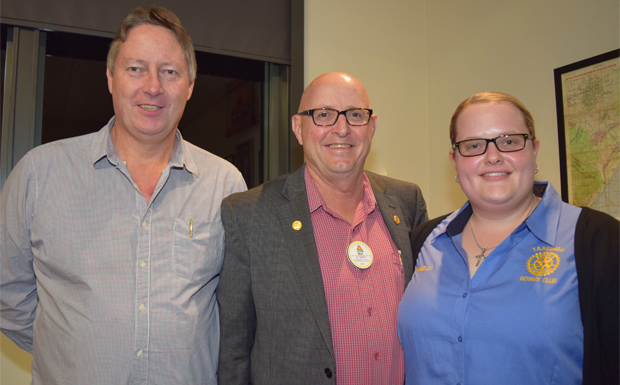 Club president Paul Laurentiussen said the money would be divided between to the Kingaroy Local Ambulance Committee (LAC), “Violets Of Tomorrow”, and Taabinga Rotary’s plan to upgrade the walking track in the Kingaroy Town Common.

Kingaroy LAC president John Box was the guest speaker at the club’s meeting on Wednesday night at Kingaroy RSL.

John explained the LAC had begun fundraising to purchase a “MegaCode Kid”, an advanced training mannequin which allows paramedics to practise life-saving skills for child patients.

The computerised dummy provides scenarios using different heart rhythms, has a realistic airway, can be defibrillated and injected.

The fully programmable child mannequin is likely to cost about $11,000.

“Violets Of Tomorrow” is another cause close to John Box’s heart.

His six-year-old granddaughter Violet is part-way through treatment for an aggressive childhood cancer, neuroblastoma.

So far she has received seven rounds of chemotherapy, nine hours of surgery, has had a kidney removed and a bone marrow transplant. She has also undergone radiation treatment and antibody therapy.

“Violet turns seven years old on October 5. One of her birthday requests is to raise money so other kids don’t have to go through what she has,” John said.

Violet’s family has set a target of $40,000 that they hope to raise for the Children’s Cancer Institute of Australia.

“We know many children that have come before Violet and the decades of research have increased Violet’s chance of survival,” John said.

“We think of the ‘Violets of Tomorrow’ and believe the Children’s Cancer Institute can make a difference.”

The Taabinga Rotary Club is still keen to get donations of books for the Bookarama, which will be held at Kingaroy Town Hall on September 17-18.

Books may be left at J.A. Carrolls Solicitors, Elders, Ken Mills Toyota or in the Rotary box near Big W at Shoppingworld.