A free family concert is being held on Friday night at Nanango Showgrounds … and a big night of music and fun is being promised.

The night has been organised by well-known Yarraman singer/songwriter and announcer Larry Cann alongside Drought Angels, and will feature two top country music stars as well as Larry himself.

Dani Young was a Golden Guitar award finalist in 2017 and Chris Staff is an ICMA finalist singer/songwriter.

The Nanango show on Friday night, and a similar event in Chinchilla on Saturday, have been dubbed the “Country Cares Arena Tour”.

“It was inspired after the release of my single ‘Country Cries’ which tackled the tough subject of rural suicide,” Larry said.

“I was approached by Drought Angels in Chinchilla who asked if they could use the song for their mental health promotion to rural families they help daily.

“After meeting with Tash, Jenny, Jo and the team, we came up with the idea of inviting families out to enjoy a night of entertainment and family fun plus hearing information between performances about help and assistance, even life testimonies of surviving families of tough times.

“So we started applying for grants and regional support.”

Larry said each of the musicians would do a set, and there would be presentations on the screen from Drought Angels.

RHealth representatives will be present and the South Burnett Suicide Prevention Working Group will be bringing along their “Depressed Cake” stall.

“There’ll also be plenty of giveaways from Wrangler, and vouchers thanks to the South Burnett Regional Council,” Larry said.

“It’s going to be a special weekend so I encourage all families across the South Burnett to come out with the kids and enjoy it as we ease into the school holidays.

“Probably bring some chairs or a nice blanket. We will move undercover at Nanango if it’s too wet to be out in the open.

“The main thing is to come out with the family.

“There will be a bar, food stalls, and coffee plus a slide and jumping castle if the weather permits.

“Let’s make a difference and keep our families together.” 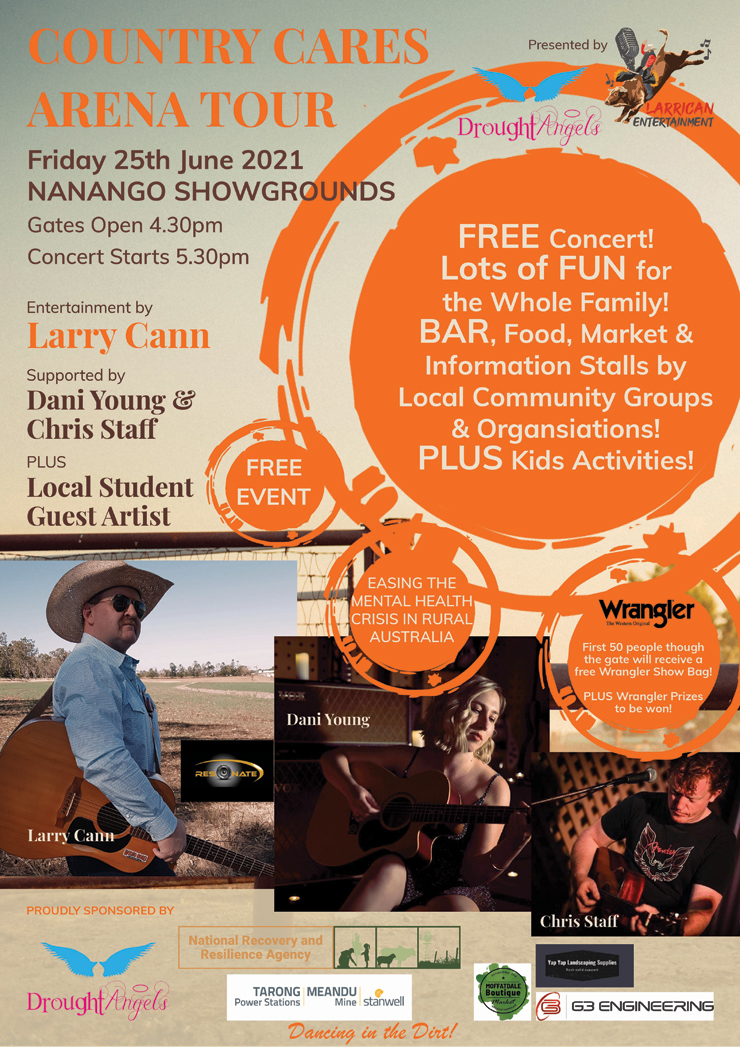