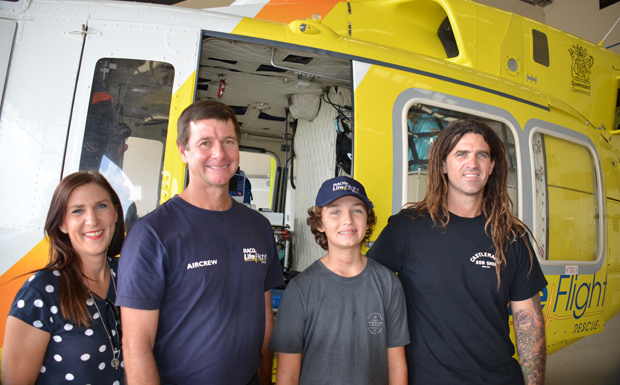 A young boy seriously injured during a clean-up after wild storms swept across the South Burnett in October 2018 is this year’s Sunshine Coast LifeFlight Ball ambassador.

Connor Creagh, now 12, was airlifted by an RACQ LifeFlight helicopter from his grandparents’ property near Coolabunia after a fallen tree sprang back, pinning him from the chest down.

A LifeFlight critical care doctor worked to stabilise Connor before loading him into the helicopter for the flight to the Queensland Children’s Hospital.

Connor and his family were special guests at the official launch on Thursday of promotions for this year’s Sunshine Coast LifeFlight Ball.

“RACQ LifeFlight Rescue means so much to me, it feels like it’s time to give back,” Connor said.

During his recovery, the teenager cooked up a keen interest in the culinary arts.

“Cooking gave me a chance to take my mind off my accident for a while and now I love it,” he said.

A private lunch prepared by Zumbo and fellow celebrity chef Matt Golinski will be one of the prizes which will be auctioned at the black tie LifeFlight Ball at Novotel Twin Waters on Saturday, April 4.

“This is our major fundraiser, we rely heavily on support from locals for the gala ball so it is very important and vital to raising our funds,” LifeFlight spokesperson Mandy Hentschel said.