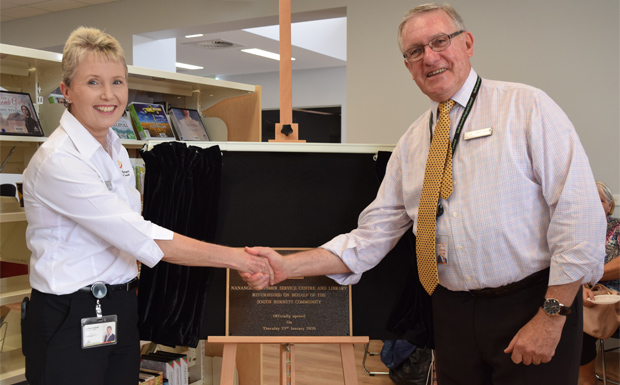 The $2.37 million spent on refurbishing the Nanango Customer Service Centre and Library will have no impact on rates, South Burnett Mayor Keith Campbell said on Thursday.

The reason was that $200,000 of the cost was paid for by the State Government’s Works For Queensland grants program, and the remaining $2.17 million was already set aside in Council’s depreciation fund.

However, ratepayers will now be relieved of the six-figure repair bills the former Nanango Shire Council Chambers building was ringing up.

And Nanango residents will get to enjoy a modern library the equal of anything else in the region.

The Mayor made his comments at the official opening of the building on Thursday morning, which was attended by about 60 people, including former Nanango Shire councillors.

Mayor Campbell told guests the refurbishment of the former Nanango Shire Council building and library marked the latest step in a process that stretched as far back as 1883 when the Nanango Divisional Board opened an office in George Street.

The Board became Nanango Shire Council in 1903, and the town gained its first library in 1924 when the old State School was moved to a site near where the Drayton Street war memorial stands today.

The original George Street offices burned down in 1934, and a new brick Council Chambers opened on the site in February 1936.

However, by 2017 the Nanango building had effectively reached the end of its life and the South Burnett Regional Council began examining options.

“In the past four years this building had experienced two small electrical fires; rainwater damage to its internal walls, kitchenettes and office flooring; repeated box gutter failures during high rainfall events; and subfloor and wall bracing failures in the rear of the office,” the Mayor said.

“In addition, the air conditioning unit had reached the end of its life and malfunctioned every time the weather warmed up.”

The Council had the building assessed and was given the option of demolishing the old Council chambers and building afresh, or conducting an extensive refurbishment instead.

In the end, Council opted for refurbishment because it offered better value.

It hired Hollindale Mainwaring Architects and Cardno Engineering to draw up plans for the refurbishment in 2018 then awarded a tender to Lanskey Constructions in June 2019 to carry out the work. This was completed in October.

The Mayor said many people had contributed to the project, including those who turned up to a public meeting before work began to suggest what parts of the old building they’d like to see retained; South Burnett tradesmen and suppliers who carried out a lot of the building work; and Virgil Smith, who re-purposed some of the timber from the former Council table into a table and display cabinet in the new library.

Guests at the opening were invited to take a walk through the building to see the library and the completed offices, which now house about 50 Council staff. 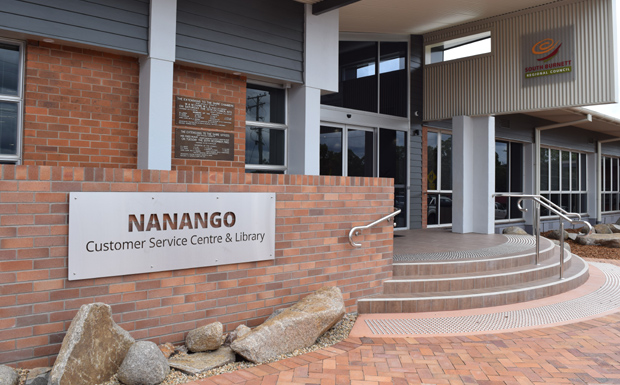 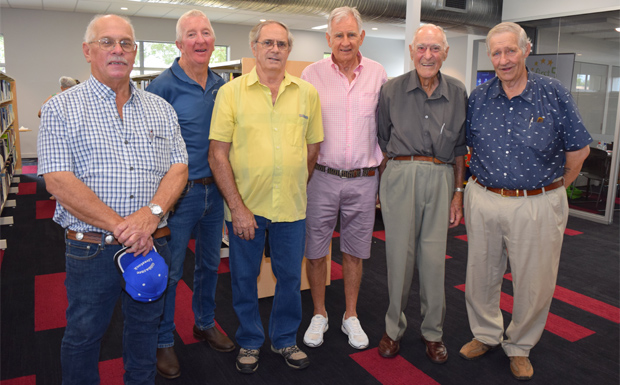 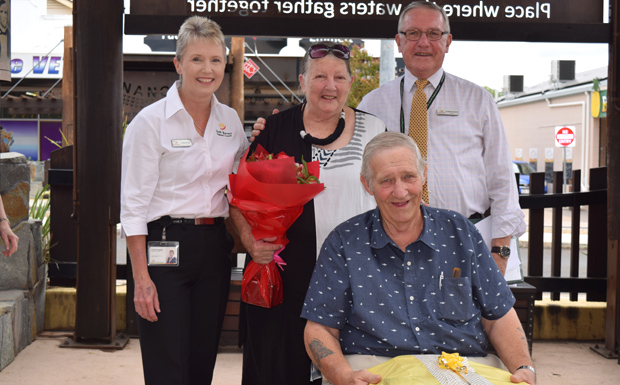 Earlier the same morning, about 50 people turned out to the corner of Drayton Street and Alexander Lane in Nanango to witness the official naming of a streetscape shelter.

South Burnett Mayor Keith Campbell said it was only the third time he had carried out an official naming ceremony while he was in office – the other two were Roger Nunn Place in Kingaroy and Kathy Duff Bridge at Byee – but it was no less important.

“The Green family have an association with Nanango that is almost as old as the town itself,” he said.

“Whether it was on the former Nanango Shire Council, the Nanango Race Club, Nanango RSL, the Show Society or many other community organisations, members of this family have been contributing to the Nanango community for more than 120 years.

“They have played a big part in what the town is today.”

The Mayor said the idea of naming the streetscape feature after the family had been suggested by former Mayor Wayne Kratzmann.

The original suggestion was for the shelter to be named after Barry and his wife Mary.

However, the couple said they would prefer it if it were named after the entire family instead to recognise the contributions made by generations of Greens, not just their own.

Councillors agreed to the request, and signage providing an outline of the family’s history was attached to the shelter late last year.

In response, Barry said he had been thinking about running for Mayor at the upcoming Council elections but recent surgery had forced him to put those plans aside.

However – now that he was on the road to full recovery – he’d had the opportunity to revisit the idea.

“So today, Keith, I’m sorry to have to make this announcement, but I must,” Barry said, as the audience drew its collective breath.

“I’ve decided I prefer to have the occasional flutter on the horses and staying busy looking after my chickens, so I’m not going to run for Mayor, after all,” Barry said.

“I guess this means you’ll just have to do it without me.” 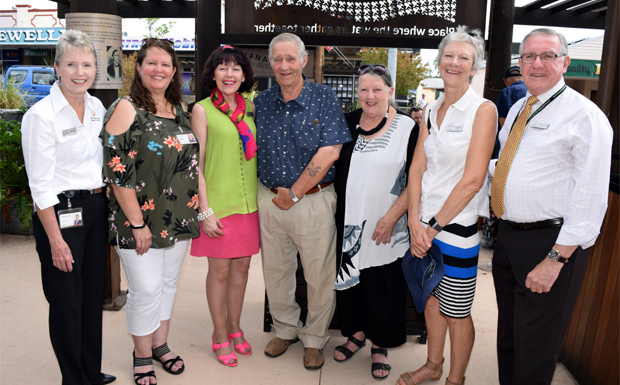 Crs Roz Frohloff, Danita Potter, Kathy Duff, Ros Heit and Mayor Keith Campbell posed for a group shot with Barry and Mary Green; Cr Gavin Jones, who is taking a short break, was an apology along with Member for Maranoa David Littleproud and Member for Nanango Deb Frecklington