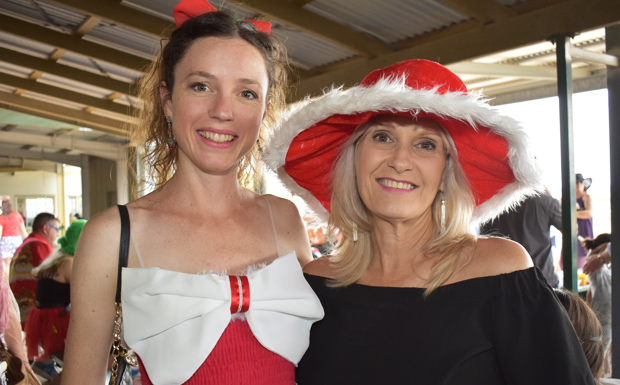 It was all about Christmas at the Nanango Races on Sunday – the official Fashions of the Field theme – for Karina Paine and Shaque Dugdell, from Kingaroy

Nanango’s special Christmas race meeting on Sunday had everything … spills, thrills and even a spot of cooling rain between races.

The novel Sunday format has proven popular for the past three years and punters turned out in force again, including a large contingent from St Patrick’s Catholic Primary School in Nanango who were farewelling long-serving principal Matthew Vine.

But although everyone was enjoying the festive fun, it can’t be said the meeting didn’t have a touch of the silly season about it.

The day started with a puzzle over a missing bus and continued with four late scratchings due to other transport difficulties.

Then there was a deadheat in Race 1, followed by a barrier breakout in Race 2 which led to a riderless horse greeting the judge.

A bizarre mishap delayed the start of Race 3 when keys were accidentally locked inside an official’s vehicle; unfortunately, the vehicle was parked on the track at the time.

Then a heavy but short cloudburst sent patrons scurrying for shelter at the start of Race 4.

But everyone was smiling at the end of Race 5, when Spur With Ease, carrying the number one saddlecloth, raced home in first place – meaning a $1000 donation to the QCWA’s drought appeal from Racing Queensland, matched dollar-for-dollar by Tabcorp, Ladbrokes, Sportsbet and BetEasy.

Racing Queensland CEO Brendan Parnell was on hand to share the good news and congratulate the winning jockey, Minonette Kennedy.

Across Queensland, more than $50,000 was raised during the “1 for the Bush” campaign for drought relief with 10 number one saddlecloth winners at dogs, trots and thoroughbred races on Saturday and Sunday.

The Brisbane Greyhound Racing Club also donated $1000 and the Kilcoy Race Club and Kilcoy Diggers each gave $800, meaning the QCWA appeal will receive a $52,600 boost from the weekend.

Nanango’s next race meeting at Lee Park will be held on February 15. 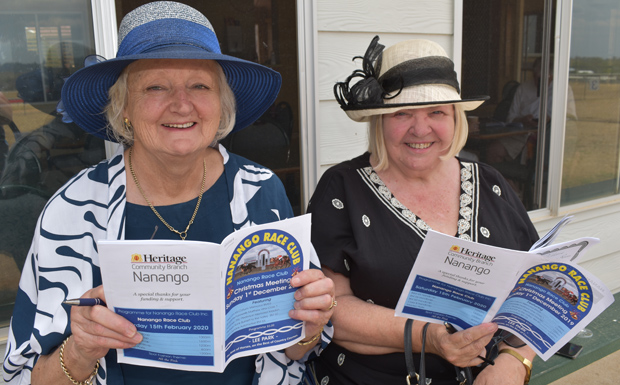 Gloria Kirkness, from Nanango, and Larraine Barlow, from Brisbane, were busy studying the form guide 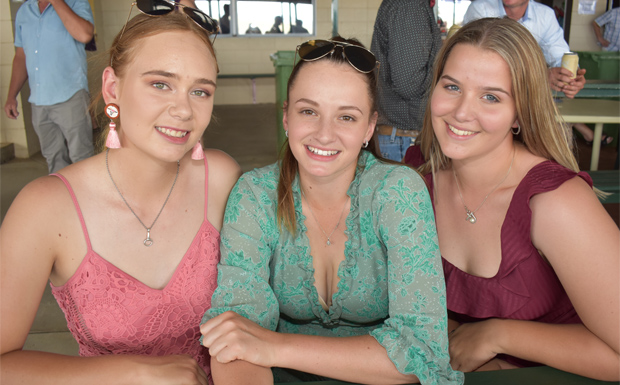 Alecia Rigg, from Eidsvold; Katelyn Beresford, Nanango; and Tori Almond, Maidenwell, were catching up at the races 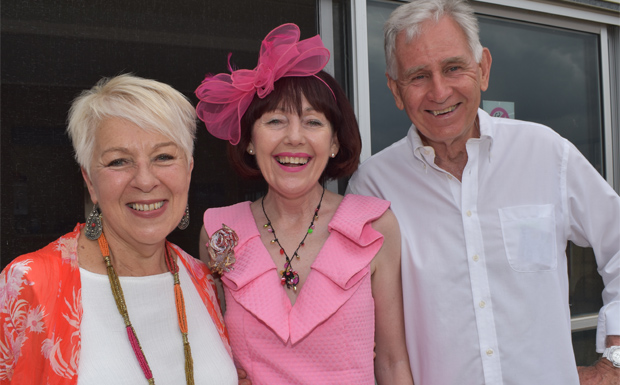 Jenny and Rod Morgan, from Nanango, with South Burnett Deputy Mayor Kathy Duff, centre … Kathy was at the races with a bunch of her rellies to watch La Belle La Belle run in Race 2 (see below) 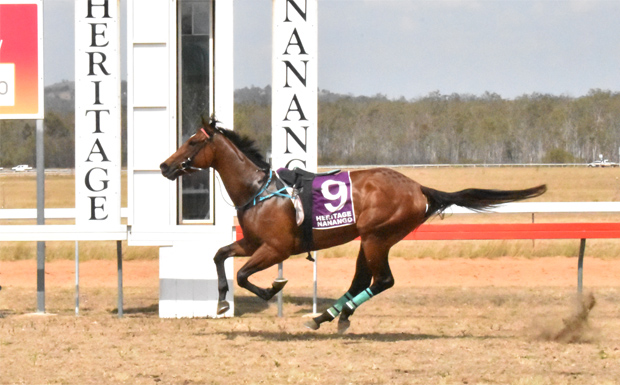 La Belle La Belle knew what she had do in Race 2, it’s just that she left her jockey, Hannah English, behind on the ground after the filly broke through the barriers … English was cleared by paramedics and notched up a win, second and third in the next three races; La Belle La Belle was a late scratching

Where’s a street kid when you need them? The start of Race 3 was delayed when the automatic locking system on an official’s vehicle decided the car should stay parked on the race track … a few amateur ‘thieves’ and a strip of wire snipped from the fence eventually solved the problem 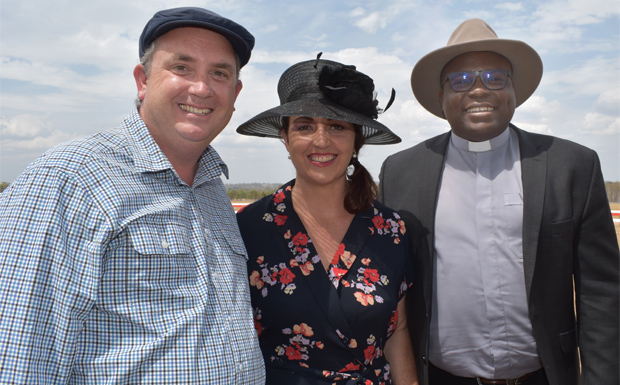 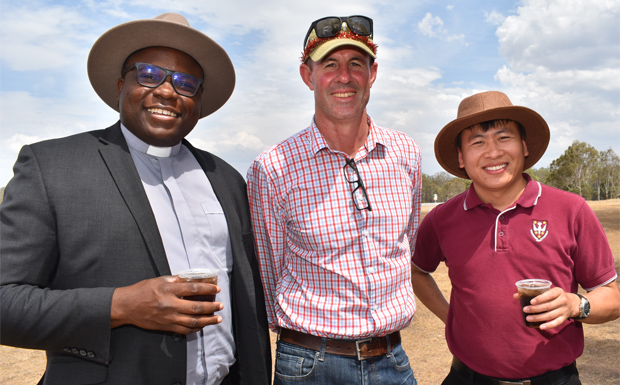 Fr Chukwudi and seminarian Sang Duc Bui, from Brisbane, with the incoming St Patrick’s principal Justin McCarthy, centre … Justin has been a teacher at the school for many years 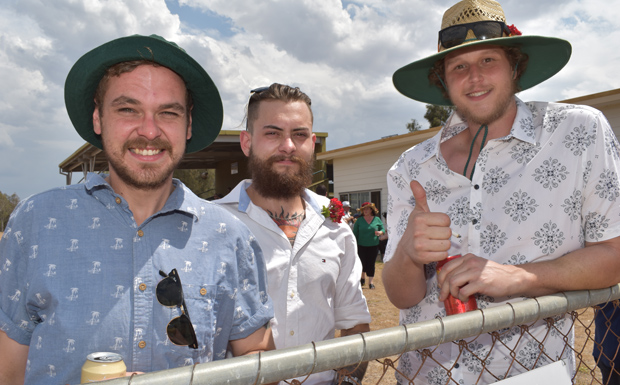 Chris Gaffney, from Kingaroy, was celebrating his birthday at the track with Codey Gleich, from Toowoomba, and “Davo”, ex-Cairns 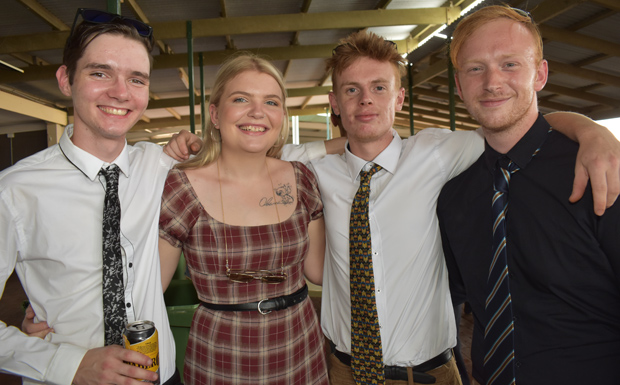 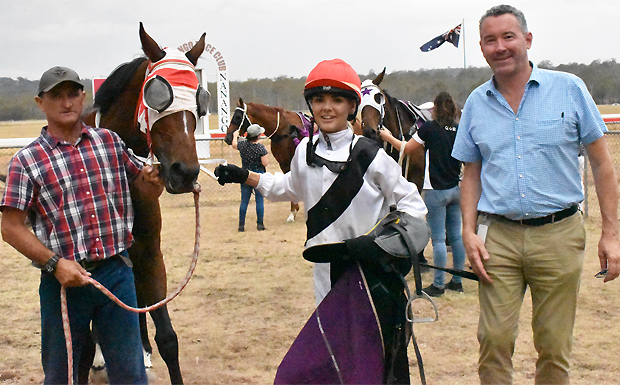 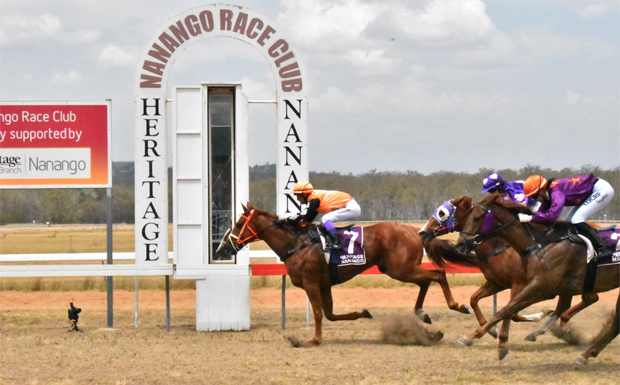 Good Grab, with Kenji Yoshida aboard, races to the line in Race 1 … the judges couldn’t separate second and third with Dave’s Valor and Absolute Bonza hitting the line in a dead heat 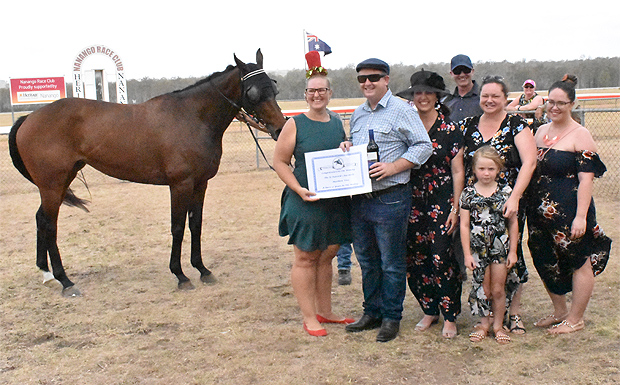 Race 2 was named after departing St Patrick’s principal Matthew Vine … Matthew, second from left, with some of the St Patrick’s crew including Fleurette Devine, Sonia Vine, Belinda Legge and Tamara, 7; and Simone Ricketts 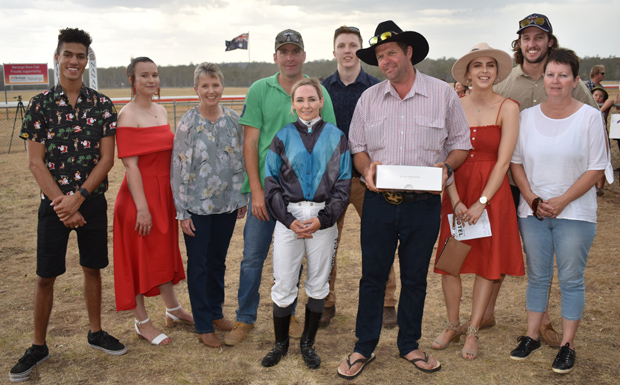 Members of the Pederson and Frohloff families with winning jockey Hannah English after the running of Race 3, the Nanango RSL / Pederson Memorial Maiden Plate 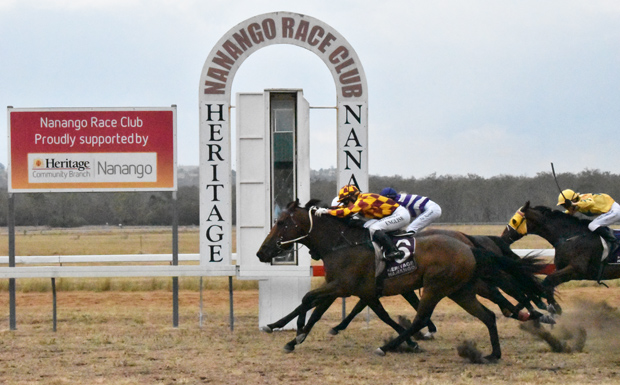 The closest finish of the day was in Race 4 when Court Rules, on the rails, just edged Time Out by a nose