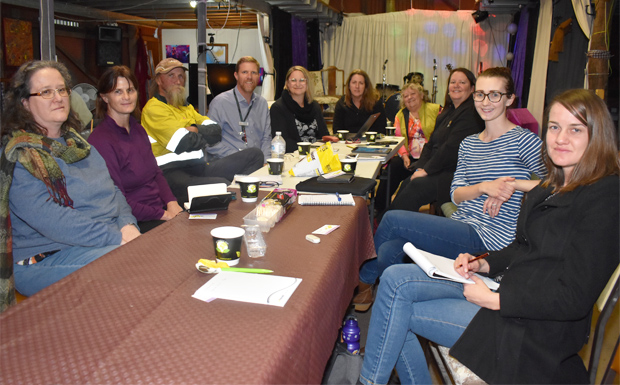 A dozen creative people gathered at The Shed in Nanango on Thursday night for the third of the South Burnett Regional Council’s quarterly “Creative Roundtable” get-togethers.

Previous meetings have been held in Wondai and Blackbutt.

The idea for the Roundtables – which were suggested after an Arts Council public forum in Kingaroy – is to get people involved in the creative arts out of their “silos”, to brainstorm, network and build relationships with Council.

So far, discussions have revolved around RADF funding and the need for Council to develop a new Arts policy.

An official Arts policy is needed before applications can be made for larger-scale grants.

A copy of Council’s last Arts policy, which was developed in 2011, was tabled at the Nanango meeting.

SBRC Senior Economic Development Officer Craig Tunley and arts portfolio holder Cr Danita Potter said this would be used to form the basis for community consultations and discussions within Council around the development of a new arts policy, but this was unlikely to be completed ahead of next year’s March Council election.

Some of the other ideas tossed about included:

Council’s next Creative Roundtable get-together will be held from 1:00pm on Sunday, September 22, at Murgon RSL Club.

It will be preceded by a meet’n’greet hosted by South Burnett Arts Inc (buy lunch and chat) at the same venue from noon.