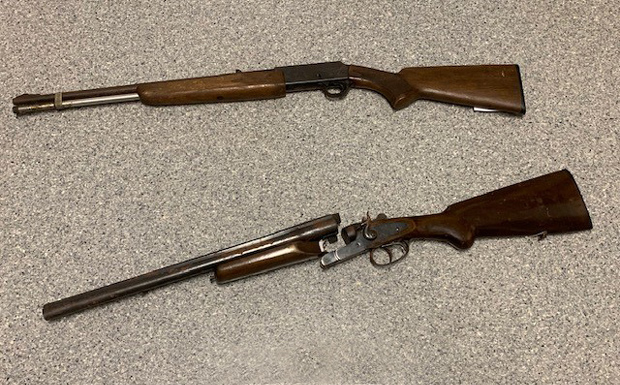 Detectives from Taskforce Maxima allegedly seized drugs and firearms when they raided a house in Venman Street, Kingaroy, on Friday.

The raid was one of four in the Kingaroy area conducted by Taskforce Maxima in conjunction with Kingaroy police.

Officer-in-charge of Kingaroy Police, Senior Sergeant Dave Tierney said the other searches were conducted at homes in Booth, Kingaroy and Fitzroy streets.

Five people will face a number of charges when they appear in Kingaroy Magistrates Court on September 16.

A 39-year-old Kingaroy man has been charged with possessing drugs and drug utensils after the Kingaroy Street search.

A 42-year-old Kingaroy woman and a 20-year-old Kingaroy man have been charged with possessing drugs and drug utensils. The man will also face charges of unlawful possession of a firearm, explosives (ammunition), a laser pointer and a restricted drug.

Five teenage boys have been charged after an alleged crime spree that started in Chinchilla, continued in Nanango and Yarraman, and finally culminated in their arrest at Cecil Plains.

Police allege a Volkswagen was stolen from a home in Chinchilla on July 12.

At 10:40pm on Sunday, July 14, the vehicle was allegedly involved in a break-and-enter at a Crows Nest supermarket and a service station at Yarraman a short time later.

Police say that on the same night, the vehicle was involved in break-and-enters at two service stations and a supermarket in Nanango.

At 8:49pm on July 19, a group of boys were seen in the vehicle travelling east on the Warrego Highway at Warra.

At 9:20pm police successfully deployed a tyre deflation device on the Warrego Highway in Dalby but the vehicle continued to Cecil Plains before being abandoned on Cheetham Street.

At about 11:30pm, the teenagers allegedly stole a Toyota LandCruiser from a carport. But while trying to reverse the vehicle, the 4WD became wedged against a fence.

The owner came out of his house and the teenagers allegedly threatened him with an iron bar before fleeing on foot.

The Toowoomba Dog Squad was called in to track the five boys.

Police say they were found hiding in a shed of a Cecil Plains property about 2:15am.

The 16-year-old Eli Waters boy has also been charged with entering a dwelling and committing an indictable offence.