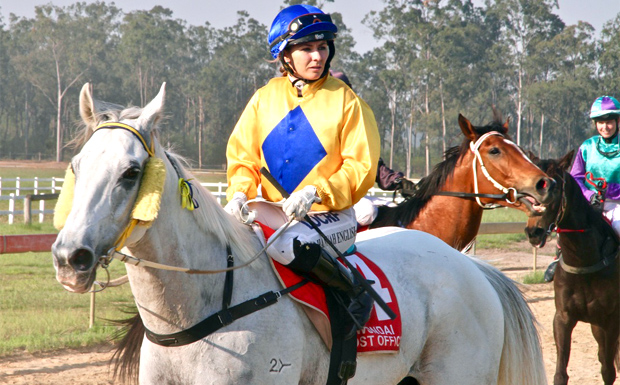 Clouds and Hannah English after their 2018 Wondai Cup victory … the horse seems certain to start at short odds this Saturday (Photo: Ross Stanley)

The Lewis Duff Memorial Handicap (1100m) at Wondai on Saturday is an appetising affair.

Although there are only four final acceptors, the competition will be keen … and there is an old saying that small fields often produce an upset.

The topweight Viceman, prepared at Warwick by Steven Thomas, would have the best credentials if the contest was on grass.

The Denman gelding raced in provincial company when a member of Joe Pride’s Sydney team and has prospered since coming north, with 19 outings netting four wins and four seconds.

The five-year-old was understandably out of his depth at Eagle Farm two weeks ago when he took on a city class $75,000 Benchmark 75 Handicap.

Viceman has never performed on anything but turf so he needs to be taken on trust on an alien surface.

His supporters could well know their fate early on.

If he drifts back and has to cope with the flying sand, he will either cop it or he could lose ground fairly quickly. But his rider Hannah Phillips knows the circuit well.

Viceman’s dam is the imported Vicereine, a British mare endowed with the genes of Mr Prospector, The Minstrel, Northern Dancer and Sir Ivor.

Clouds, of course, is the well-known and throughly respected local.

The grey, with a 6:3-2-0 form line around Wondai, is ultra-reliable on his home patch.

Lindsay Anderson’s charge was beaten a nose there at his last appearance on Anzac Day when asked to hump 64.5 kilograms in BM 55 grade over 1465 metres.

But this weekend ’s race is an open handicap and Cloud’s impost is a more comfortable 58.5 kilograms.

Rest assured, bookmakers will take no risks when they put up the odds for the Bradbury’s Luck gelding.

Matthew Powell will pilot the steed that goes well fresh.

The Bundaberg visitor Al’s Brief is exceptional on the sand, with 11 wins at Bundaberg, Gladstone and Gympie.

At the Brief Truce gelding’s only Wondai outing, he beat all bar Canid and Liverpool Jane.

More Worldly, the bottom weight by More Than Ready, will be lining up for his seventh consecutive sand track task.

His last six runs have yielded four wins and a minor placing.

Meanwhile, I Am McLovin returns to his favourite course in the Wondai Electrical BM 50 (1100m).

The bay by Murtajill has an impressive 7: 4-1-0 record at the venue, and perhaps the familiar environment will rekindle the seven-year-old’s spirit.

His only run between his Gympie failure in November 2017 and his distant ninth at the same track a fortnight ago was an unplaced effort in 0-50 Rating class at Chinchilla in March 2018.

Unfortunately the sprinter that is raced and trained by Laurie Curtain drew gate 11 and is first emergency. 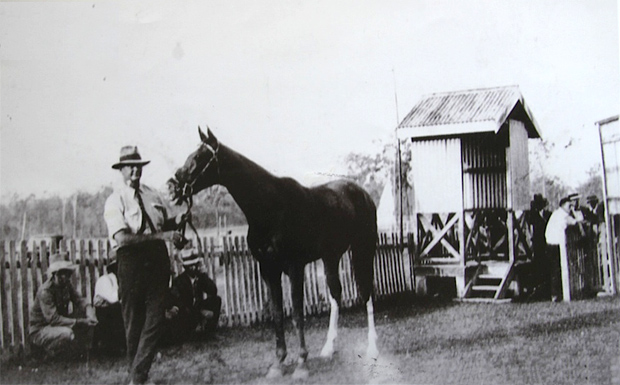 Lewis Duff with his horse LeeGuard, the winner of the 1927 Wondai Handicap … the Duff family have connections with the Wondai racecourse that stretch back to its foundation in the 1920s
(Photo: Cedric Duff Collection)

Special Time For The Duffs

The highlight of the day will be a chance for the Duff families and their friends to catch up.

The clan is sure to be strongly represented at this annual occasion.

Don’t forget to dress in Winter Brights for Wondai on Saturday.

I’ll see you there!