No More Hell For Maidenwell? The nine-year-old Raising Hell In Maidenwell camping weekend will not be held this year, and possibly never again.

Organisers Terry and Rhonda Mackrell announced this week they have reluctantly decided to pull the pin on the annual event due to a lack of volunteers.

The pair, who are also involved with Nanango’s Waterhole Rocks festival and the South Burnett Gas Guzzlers car club, started Raising Hell in 2010.

The aim of the weekend was to encourage vintage and veteran car enthusiasts to travel to the Maidenwell Sportsgrounds for a fun weekend of camping.

They could enjoy retro fashions, foods, engine burnouts, a show’n’shine and doses of rock’n’roll culture in the company of fellow enthusiasts around July 4 each year.

The early success of Raising Hell encouraged the pair to become involved with the creation of the Waterhole Rocks festival in 2012.

Waterhole Rocks is held in conjunction with the Nanango Show Society, and the Show Society’s extra helpers have helped that event grow year-on-year while numbers at Raising Hell have remained fairly static.

Terry said that  he and Rhonda have less energy these days to devote to their pet projects and had to scale back their commitments.

“Something had to go and I’m sad it had to be Raising Hell because it was a great thing for Maidenwell and everyone who took part,” he said.

However, Terry said some Raising Hell regulars had suggested they might come for a camping weekend whether the event was running or not.

He hoped they did because it would provide a cash injection for the town.

He would also be happy if some other group took over the reins and continued to run the event, or gave it a new complexion.

“If there’s some group out there who’d like to organise Raising Hell In Maidenwell, they’re very welcome to call me about it,” he said.

“I have all the contact details for past entrants and I’d be happy to pass it on to a new group, which will give them an instant audience of potential visitors.” 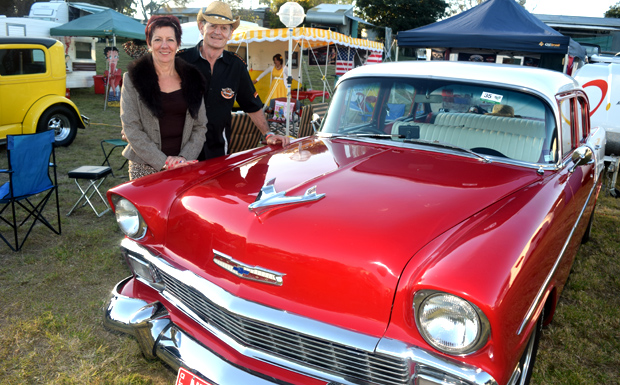 FLASHBACK: Marie and John Clayton, from Samford, brought along their 1956 Chevy to Raising Hell In Maidenwell … the popular nine-year-old event will come to an end if a new group of organisers doesn’t step forward