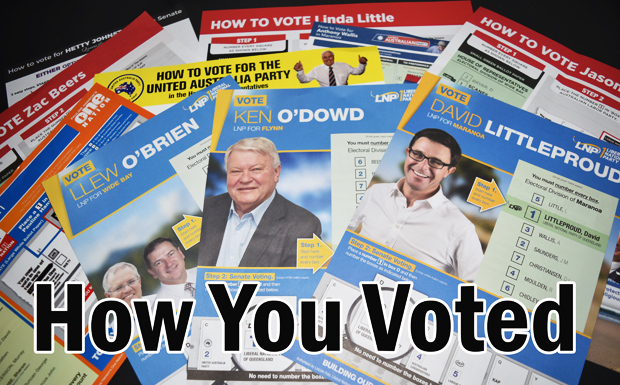 The South Burnett’s three Federal seats – Maranoa, Flynn and Wide Bay – will all remain in LNP hands in line with the blue tide that has swept across Queensland.

At 9:00pm on Saturday, Mr O’Dowd had recorded an 8.4 per cent swing in his favour and was leading his ALP opponent Zac Beers 59.4 per cent to 40.6 per cent on a two-party preferred basis.

Mr O’Dowd, who previously held the seat with a slim 1 per cent margin, was also leading strongly on first preference votes: 36.5 per cent to 29.2 per cent.

One Nation candidate Sharon Lohse was coming in third with 19.9 per cent. The majority of her preferences would be expected to flow to the LNP.

The other candidates were all in single-digit figures.

In Wide Bay, which takes in Murgon and Cherbourg, the LNP’s Llew O’Brien was always expected to win, sitting comfortably on an 8.2 per cent margin.

At 9:15pm on Saturday, Mr O’Brien had recorded a 5.1 per cent swing in his favour and was leading ALP candidate Jason Scanes 63.3 per cent to 36.7 per cent on a two-party basis.

Mr O’Brien had picked up 46.6 per cent of first preference votes, in comparison to the ALP’s 22.4 per cent.

One Nation candidate Aaron Vico was in third spot with 11.0 per cent.

All other candidates were in single digits.

In the massive seat of Maranoa, which also includes Kingaroy, Nanango and Blackbutt, sitting member David Littleproud has picked up a 6.9 per cent swing in his favour.

He was formerly holding the seat with a 17.5 per cent margin so the result was never in doubt.

At 9:30pm on Saturday, Mr Littleproud had attracted 72.8 per cent of the vote on a two-party preferred basis.

Mr Littleproud secured 54.8 per cent of first preference votes, ahead of Labor’s Linda Little (16.4 per cent) and One Nation (15.1 per cent).

All other candidates were in single digits.

Opposition Leader and Member for Nanango Deb Frecklington described it as “an incredible effort” by the LNP.

One Response to LNP Locks Down Local Seats