It’s been an interesting month of fishing in the South Burnett’s two main dams.

With the cooler weather setting in, there’s been a lack of consistent fishing as the water and season changes.

As I write, the fishing has improved somewhat over the past few days and captures of good fish in both BP and Boondooma dams are being reported.

The water temps are slowly starting to lower but constant warmer afternoons have started to make the fish bite well.

It’s been a very warm month with only a few mornings cold enough to pull on the jumpers. The fish seem to be somewhat quiet in the mornings but as the day warms, they’ve been biting.

Boondooma has started to pick up. The bigger Bass and Goldens are starting to be caught on a variety of techniques as the fish begin moving up shallow and sitting on the flats.

The last month has seen some inconsistency but good fish are now starting to be found. The great thing about Boondooma is that you can catch fish many different areas, covering a variety of techniques.

In the mornings, when it’s cooler, I like to head up the arms of the dam and fish the edges as this seems to be the best option for those feeding fish early in the morning when it’s cool. I’ll cast a 3/8 Bassman spinnerbait or a lipless crank to the edge, let it hit the bottom and slowly wind it out.

The fish tend to move up on the edge during the night and will generally feed until the sun hits the water and it starts to warm. This can be a great way of catching some big fish early, especially if you’re up in the timbered arms and there’s a lot of structure near the edge that you’re fishing.

Another option is fishing the many weed beds that line the edge of the dam. Jerk baits are a great option here. Cast the jerk bait up to the weed edge and crank it down a couple of winds, pause it and then begin a series of twitches as you wind. Remember that fishing close to the weed, you will come in contact with the weed regularly, so just give the rod tip a quick flick to get the jerk bait free.

Be patient with this technique as the Bass sitting in the weed pockets will eventually come out and hit the jerk bait hard. This is also a great option for catching some big Yellowbelly, particularly in the afternoon when the water is warm.

Lake Boondooma is currently at 32 per cent (Image: SunWater): 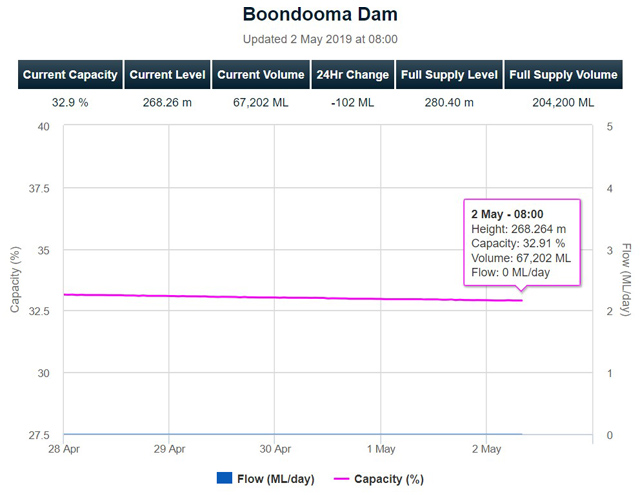 After the sun has been up for a while and the day starts to warm, I always move to the deeper sections of the dam and target the schooled fish sitting out on the flats.

Sound around until you’ve located a good showing of fish. Generally at this time of year I’ll be searching around the 15 to 25 foot mark. When a school is located you have a few options to cast at the fish to entice a bite: ½ rigged plastics, tail spinners, blades, spinnerbaits and soft vibes all have their place out on the flats and it’s just a matter of trying a few baits until you have one that consistently works.

Bait fisherman are still catching good numbers of fish up in the timbered arms, tying off trees and fishing with live shrimps and worms as bait. Bait can be purchased at the kiosk and if you want the best bait, you can catch shrimp in the weed around the dam edges with opera house pots.

Trollers are picking up some good fish trolling around the weed edges and along the rock walls up near the dam and in the timbered arms with spinnerbaits and deep-diving hard bodies.

Fishing on BP has slowly been improving with some nice catches of Bass and Yellowbelly coming in, particularly during the warmer afternoons.

With the warm afternoons and the cold mornings, the fish have generally been staying out deep in the 10 to 15 foot zone.

Depending on the day, if it’s cool in the morning, I will target the edges with spinnerbaits, blades and tail spinners. It helps if the edges have spindly timber mixed in with weed, as the fish tend to move up and feed around this structure early in the morning.

BP Dam is currently at 8 per cent (Image: SunWater): 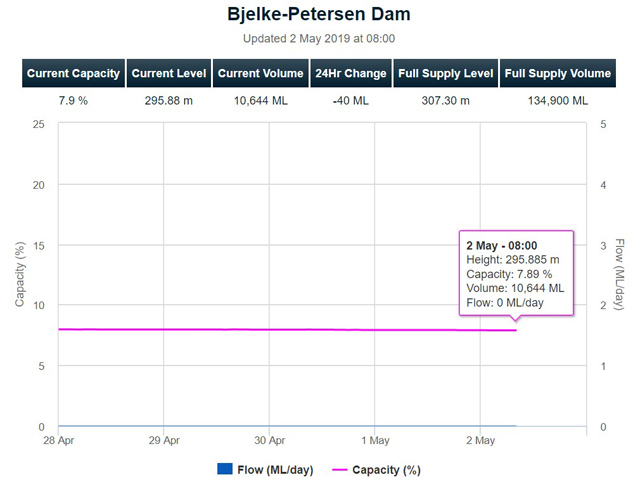 Later in the day – especially if it’s warm – I will move to target those fish sitting in the deeper flats of about 20 feet.

The fish have been spread out over the flats next to Lightning Ridge, Bass Point and wide of the Quarry.

The best way to target the fish out deep is by using blades, tail spinners and soft vibes. Sound around these areas until you have a good show of fish on the sounder, then go through the above-mentioned lures until you find one that gets you on to a couple of fish and stick with it.

Make long casts and make sure the lure stays in contact with the bottom regularly. Use either a hopping retrieve, or a dead slow roll along the bottom.

Persist with this long enough and you will eventually get a bite.

Trollers are picking up some nice Bass trolling deep divers and spinnerbaits along the bottom in 12 to 14 feet over the above-mentioned areas.

Bait fisherman are picking up some nice catches of Bass and Goldens in the timber on shrimps, worms and yabbies.

Don’t forget that you can also book a fishing charter with me on BP and Boondooma dams.

If you’d like a great day out and all the info and knowledge to catch Bass or Yellowbelly in our two great dams, make sure you give me a call on 0408-658-592 and I’ll be happy to take you out for a great day’s fishing.

Hope to see you on the water soon …

Until next month, tight lines and bent rods!