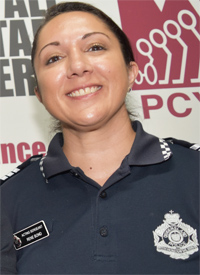 The South Burnett PCYC in Murgon will begin an eight-week trial on May 11 of a Saturday night program which aims to cut youth crime in the area.

“Everybody is excited. A lot of community organisations and businesses have put up their hands to sponsor it,” Sgt Bond said.

A second planning meeting will be held on April 24 to confirm the final details but a basic program has been worked out.

The program will begin about 7:00pm, to be followed by a sit-down dinner at 8:00pm, prepared by volunteers.

Activities would then begin and run until they begin to wind down about 10:30pm.

About 11:00pm, people would begin being transported back home.

Sgt Bond said the activities would not all be sports.

There would also be hobbies and music.

“We are still looking for more volunteers to help out,” Sgt Bond said.

“We need volunteers to help supervise activities, or perhaps teach a hobby.

“Or they could bring their own kids along to be a part of it.”

Organisations, businesses and individuals sponsoring the trial include:

Sgt Bond said South Burnett CTC was assisting with transport and Youth Justice would be helping with supervision.

A number of Elders and other individuals were also supporting the trial.