Worth Making The Trip To Wondai 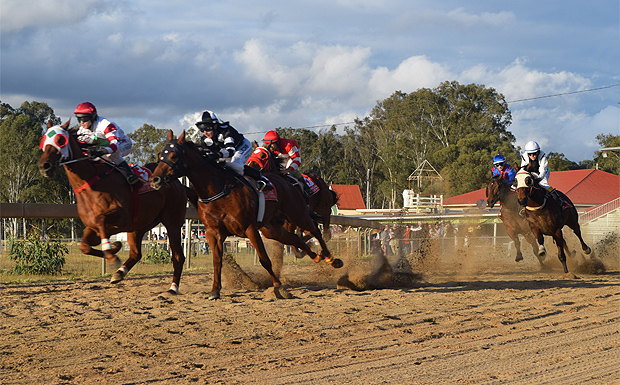 Following a very pleasing response from owners and trainers, there will be plenty of horses travelling to the meeting.

It is a special, extra race day that was offered when Gayndah relinquished a date allocated to cover a key washout from last year.

The support from the fraternity for this weekend’s card sends a message that replacement programs are valued because the prize money is not lost to the industry.

The final event will be the Col Ryan Memorial Class B Handicap, in honour of Wondai’s long serving starter who passed away last month.

Ryan’s daughter Narelle Wenck is a part-owner of the candidate called Ascot Bound.

Also in the ownership is Narelle’s husband Jeff, the President of the South Burnett Race Club, and their daughter Kristen, the six-year-old’s trainer.

It goes without saying that victory or a grand showing by the brown gelding which has a second placing to his credit at the track would be enormously satisfying for all concerned.

Another highlight will be The Gayndah to Wondai Open Handicap (1000m).

The locally trained Clouds (Jason Hoopert) has had four outings on the course for three wins and a second.

Trainer Lindsay Anderson has no doubt freshened the grey up for the sprint after its runner-up performance at Thangool on December 1.

Although National Trail and Say I Won’t are more highly weighted because of their superior handicap ratings, the duo have yet to be tested on Wondai’s sand surface.

Again the QTIS scheme has proved popular with seven of the ten acceptors in the Project Water Maiden Plate eligible for the attractive bonuses.

Burnett based rider Hannah Phillips will look to capitalise on her great start to the year when she partners Stick With Me for her father Barry, Targets and Heirsroc for Kym Afford and her old mate Monte Lago for John and Kaylene Hamilton.

Phillips booted home Jack of Spades for Matt Boland and Spirit’s Choice for Matt Kropp at Dalby a week ago.

She was also successful on Axlrows for Kropp at Toowoomba on December 29.

Folk looking for some reserved, undercover area should contact Christiene Nettelfield on 0447-642-207 to see if any of the trackside gazebos are still available.

Richardson Takes On The City Slickers

The field for the opener at Eagle Farm on Saturday includes Arnwood, a recent addition to Glenn Richardson’s Nanango string.

The short priced two-year-old had six lengths on his rivals in a Rockhampton maiden for juveniles on Friday, January 10.

The colt is by Better Than Ready and is QTIS eligible so there are strong incentives for having a throw at the stumps in the metropolitan area.

Arnwood’s grand-dam Carry On Kona was no slouch.

She earned more than $250,000 while Better Than Ready, winner of four listed races in Sydney and Brisbane, amassed almost $485,000 in just 16 appearances.

The son of More Than Ready is related to Miss Mooney Mooney and Publishing.

Hannah English, the pilot a week ago, has the seat again.

The pair overcame a wide gate last start and are drawn out once more in the backup engagement.

Jockeys at the Buenos Aires Palermo track in Argentina don’t use their own whips, because a communal set is provided.

After each contest, riders drop the whip they used into a receptacle.

An official brings the collection around to the parade ring and jockeys pick a whip from the bunch as they arrive to chat with connections.

They cannot be too fussy as there did not seem to be any rush or stampede to get to the “lucky dip” site.