All Aboard For Rail Trail 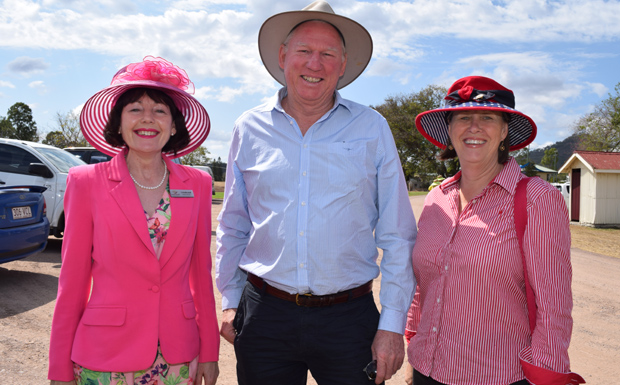 The Kilkivan to Kingaroy Rail Trail was declared officially open to the public on Friday morning at a special ceremony in Kilkivan … but six eager cyclists weren’t prepared to wait.

They wanted to be the first to explore the trail’s entire length, so after an early breakfast at the nearby Bank Cafe the group cycled past the opening ribbon and quickly disappeared towards Goomeri.

About 100 invited guests attended the event in Railway Park including Member for Callide Jeff Seeney, Member for Nanango Deb Frecklington, Member for Gympie Tony Perrett, South Burnett Mayor Keith Campbell, Gympie Mayor Mick Curran, councillors from both regions and a large number of people who’d had a hand in the project.

Mayor Campbell told the audience the 89km long trail had two parts – the sealed South Burnett Rail Trail between Kingaroy and Murgon which was 43.5km long and only open to cyclists and pedestrians because it crossed the Tick Line, and the unsealed 45.5km section between Murgon and Kilkivan which was open to horse-riders as well.

In the South Burnett, the trail crossed nine bridges and 22 roads, and the Council had planted 7000 native seedlings along its length to provide future shade as well as habitat conservation corridors for wildlife.

The Council will also be laying a concrete footpath to seal the final strip from Youngman Street to Kingaroy’s railway station in next year’s Budget.

Mayor Curran said he was confident the rail trail would be a key economic driver for all the towns along it, and passed on his thanks to staff from both councils, landholders and other stakeholders for the goodwill they had shown the project.

He also paid particular tribute to outgoing Member for Callide Jeff Seeney for funding the trail’s construction through the Royalties For Regions program, as well almost two decades of service he had given the electorate.

Fiona Bowden, from the Department of State Development who was standing in for State Development Minister Dr Anthony Lynham, said the project had required Gympie and the South Burnett to work closely together.

She praised both councils for the way they had co-operated on the rail trail’s development, which was a model she would like to see other councils adopt.

She said both councils could expect an increase in visitor numbers and visitor expenditure as a direct result of the rail trail, along with increased demand for tourism services and an increase in community health because of the recreation opportunities the trail gave residents.

Member for Callide Jeff Seeney told the crowd the rail trail had its origins in a deal he struck with former Transport Minister John Mickel in 2009 when he was first told the Kingaroy-Theebine line was going to be closed.

“I knew how important railways were to our rural communities, so I got agreement that the railway land and other assets would be available for public use after the rails were removed,” he said.

As part of the closure, Mr Seeney also helped negotiate an agreement to set aside $1 million for the development of the rail trail.

But while the agreement had been signed, the offer was never completed.

Construction of the rail trail began in June 2015 and the South Burnett’s section was completed in June this year, with Gympie’s portion following three months later.

At the end of the speeches, guests descended from the podium to cut the official ribbon and pose for photographers, then wandered further up the trail for a morning tea outside the old Kilkivan Goods Shed.

The Goods Shed is the last remaining building at the former Kilkivan railway station site, and is now used by the Kilkivan Railway Markets to store that group’s materials.

Profits from the weekly markets are reinvested into the ongoing maintenance and development of Railway Park, which will now become Kilkivan’s trailhead. 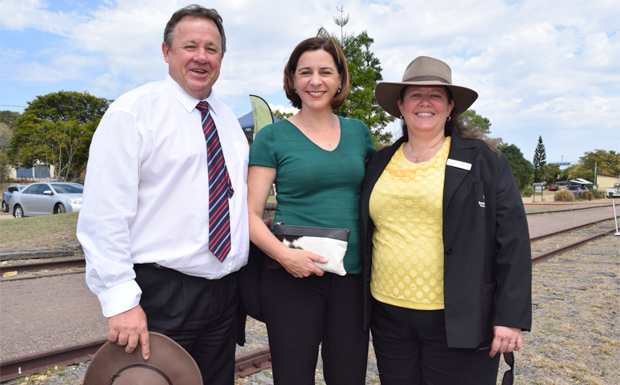 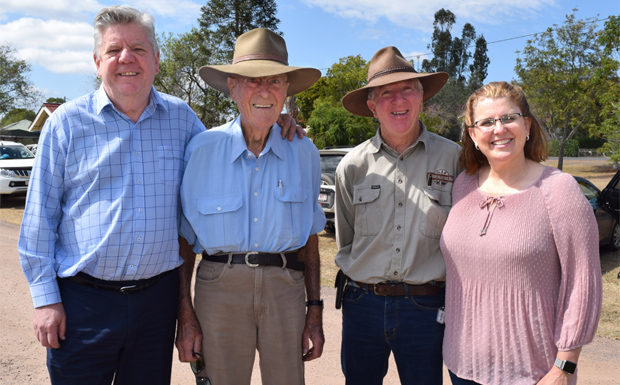 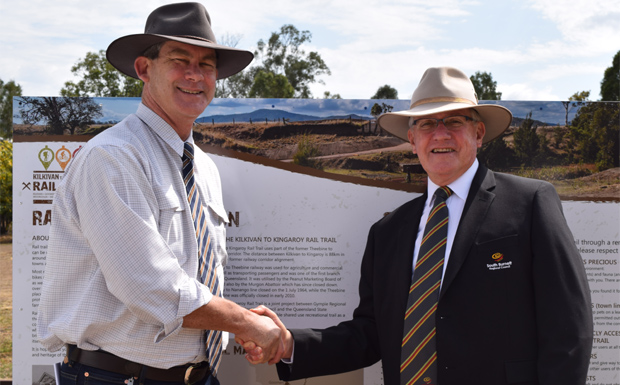 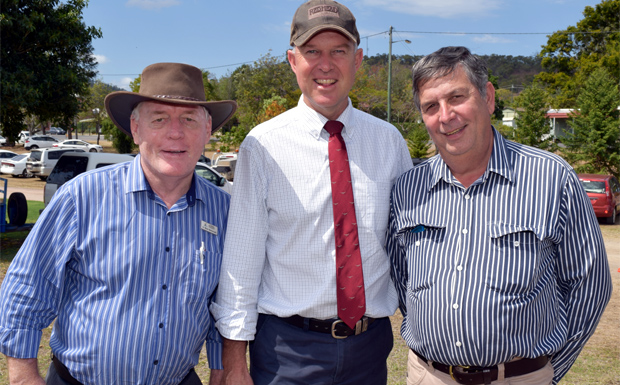 Gympie Cr Mark McDonald, Member for Gympie Tony Perrett, and Gympie Cr Hilary Smerdon; Tony was Gympie’s Deputy Mayor when the project was given the go-ahead 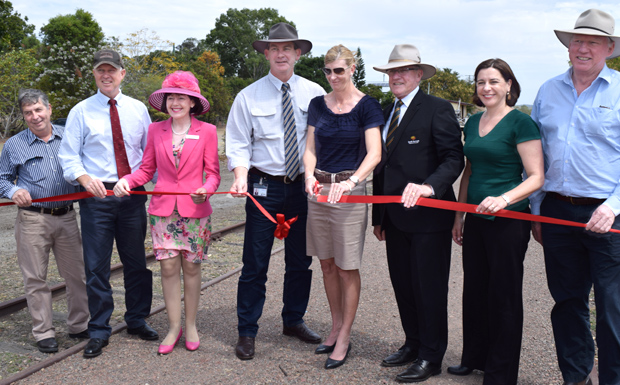 After speeches on Kilkivan railway station’s former platform, officials descended to the trail bed for the official ribbon cutting, which was performed by Fiona Bowden 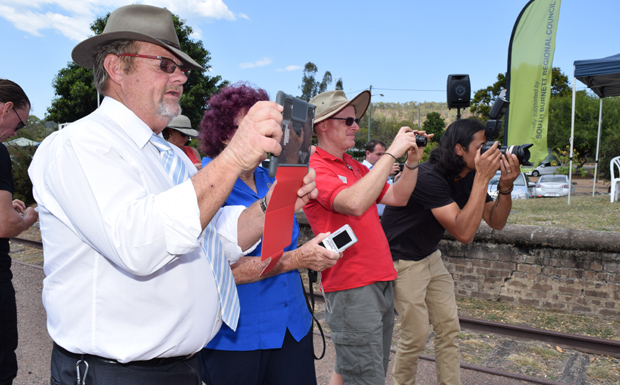 Photographers queued up to capture the ribbon-cutting moment, including Cr Terry Fleischfresser 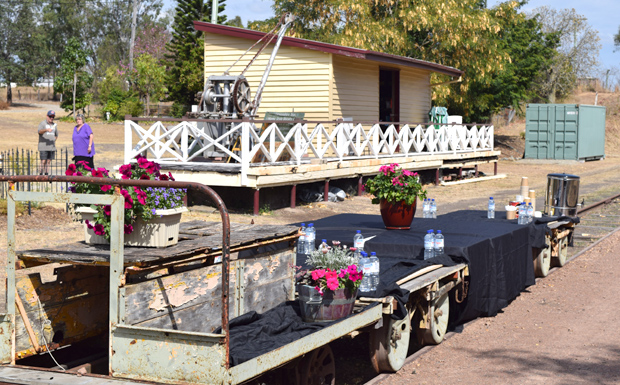 The railway station’s Goods Shed is the only building that remains at the former station complex, and a railway car out the front was used to serve up morning tea … 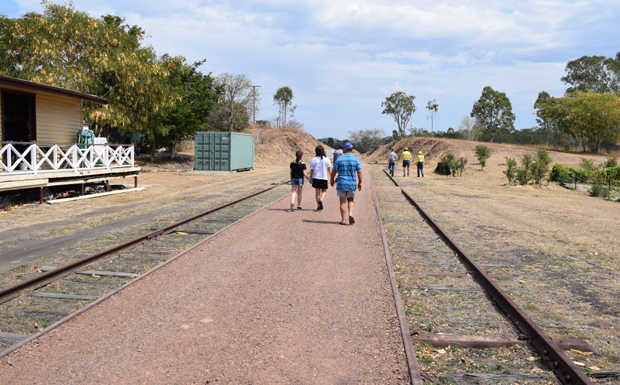