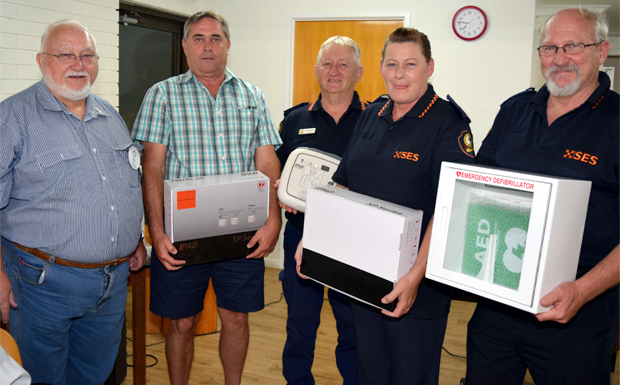 Kingaroy Golf Club and the Nanango and Kingaroy SES groups now have access to potentially life-saving technology, thanks to an initiative by the Kingaroy Rotary Club.

Last week the club presented defibrillators to all three organisations as part of their campaign to see the devices spread throughout the local community.

Defibrillators deliver a therapeutic dose of electrical energy to the heart which helps restore its normal rhythm when it’s beating too quickly or slowly, or when someone has suffered a heart attack.

Studies have shown that prompt access to a defibrillator can save the lives of almost 4 in 10 people suffering a heart attack, and as many as 6 in 10 suffering irregular heartbeats.

Rotary spokesman Ray Pitt said the Kingaroy Rotary Club had taken up the cause of getting defibrillators out into the local community 18 to 24 months ago, and would like to see Rotary Clubs take up the cause all over Australia.

He said the club had chosen the Kingaroy Golf Club as a recipient for one of the devices because sports clubs were known as places where people could have heart attacks.

The club had also chosen the Kingaroy and Nanango SES branches because they were often the first responders in extreme situations like bushfires and natural disasters where people could get stressed well beyond normal limits.

Kingaroy Golf Club president John Dalton thanked Rotary for the gift, saying the golf club had “at least two” incidents he knew of over the years where quick access to a defibrillator would have been handy.

And while both SES groups hoped they’d never have to use the devices, they thought the defibrillators would be very useful.

“If it saves even one life this will be well worth having,” Nanango Group Leader Robyn Baker said.

Defibrillators normally cost about $2000 to $2500, he said, but thanks to Rotary’s buying power the club had been able to acquire them about $600 below retail.

So the club had used some of the savings to purchase storage cabinets for the machines, which would ensure they were always readily available in an emergency.

The Kingaroy Rotary Club’s campaign follows on from the gift of a defibrillator to the Blackbutt Golf Club by Bendigo Community Bank last February; the presentation of 11 defibrillators to community groups in Maidenwell, Bullcamp and Nanango by Heritage Bank Nanango last August; the gift of a defibrillator by St John Ambulance to Cherbourg’s Barambah Health Service last September; and a similar gift by the Murgon Baptist Church to Murgon’s Visitor Information Centre in April 2016.