Surge In Dog Attacks On Posties

Queensland is one of the worst States in Australia for dog attacks on posties, according to Australia Post.

The corporation is calling on dog owners to keep their pets secured following a surge in serious incidents across Australia.

Every work day, an average of five Australia Post team members are involved in dog incidents across Australia, with more than 1173 so far this financial year.

The most incidents have occurred in Queensland, NSW and Western Australia and while attacks do happen at front doors, letterboxes and in front yards, around half also take place on footpaths or on the road.

Australia Post spokesperson Rod Barnes said shocking images of injuries and confronting footage of incidents captured around the country as posties carried out their daily deliveries served as a graphic reminder of the dangers of leaving  dogs unsecured.

“It can sometimes be difficult to imagine that an otherwise friendly family pet might pose a risk to others, but the reality is that our people are being hurt or placed in danger on a daily basis,” Mr Barnes said.

“These incidents can be traumatic for our team members and have lasting effects not only in terms of physical injury but also their mental health, and they may no longer feel safe delivering to locations where incidents have occurred.

“Even if a dog doesn’t bite, it can cause a serious accident by running in front of a postie or driver in an electric delivery vehicle, and that can also result in an injury to your pet, so we’re really asking that people remember to shut their gates, keep their pets secured and help make sure our people can deliver their parcels and mail to them safely.”

Experienced motorcycle postie Tony Gadsby, who’s spent more than 20 years delivering mail and parcels, was recently the victim of yet another dog bite while covering a new route.

“It was unexpected so I just didn’t have time to prepare, the dog just raced past me,” he said.

“It’s common for people to say ‘it never bites’ but as a dog owner myself I know they can be unpredictable, and I’d urge fellow owners to just take that extra moment to make sure their dog is not going to be a danger to someone just doing their job.”

Australia Post says residents who are unable to secure their dogs can nominate for items to be left at a place that’s safe for both the parcel and the posties through the Australia Post app. 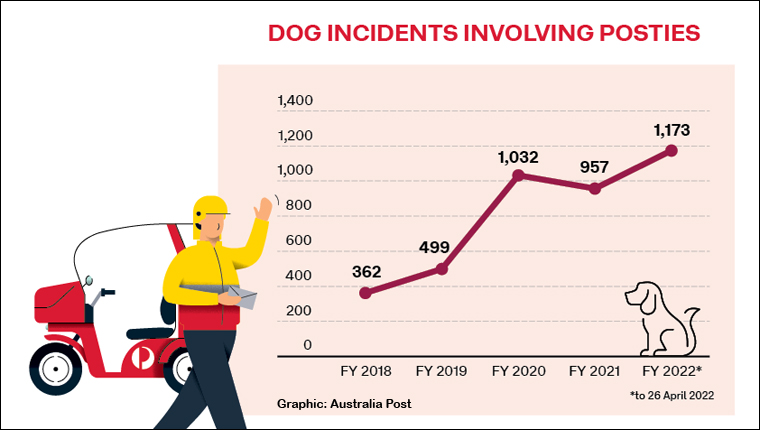 One Response to "Surge In Dog Attacks On Posties"