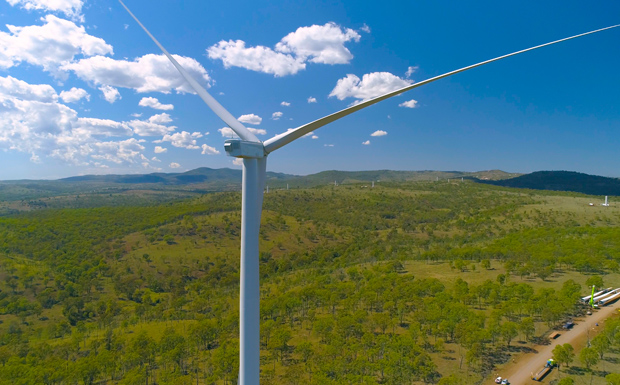 Recent wet weather has pushed back the projected completion date of the Coopers Gap Wind Farm from June to September (Photo: PARF)

Recent wet weather and some quality issues with a small number of turbine components have extended the completion date for the Coopers Gap Wind Farm from June to September.

News of the delay was shared with the Coopers Gap Community Consultative Committee (CCC) when it held its quarterly meeting at Cooranga North Hall on Wednesday afternoon.

Project Director Brian McEvoy told the meeting recent heavy rainfall had forced wind farm workers to down tools, and this had played a part in adding an extra couple of months to the project’s completion.

The need to remedy a small number of quality defects in some turbine components had also introduced delays.

However, he was confident the wind farm would come into full operation in September this year, only eight to 12 weeks later than originally planned.

This was expected to rise to 180MW within the next two weeks after more turbines passed the mandatory 240 hours of reliability testing.

All major components for Coopers Gap are now on site and heavy transports that have been moving them from the Port of Brisbane to the wind farm site over the past year have now finished.

This means traffic bottlenecks that inconvenienced some residents living near the wind farm have come to an end as well.

However, construction crews assembling the wind farm’s remaining turbines still commute to the site every day.

Because of this, it will still be several months before traffic in the Coopers Gap area returns to normal.

Workers had to abseil from several wind turbine towers using ropes last month to carry out some necessary maintenance.

Coopers Gap site manager Michael Yeo told the meeting a small number of turbines were found to have loose oil seals after the towers had been built.

The seals failed to sit correctly in their sockets, which led to oil leaking down the side of the towers.

Since the turbines were completely built, the only way to reach the sockets and replace the defective fittings was to abseil from the nacelles.

However, this had been done without incident and the seals had now been fixed.

A second defect that emerged in another small group of towers was “yaw breaks”.

Michael Yeo explained that all the turbines have braking systems to stop the blades spinning, and a “yaw break” was similar to what happens in cars with worn out brake pads.

In a few cases, the braking systems were producing more noise than necessary because the brake locking mechanism wasn’t gripping the brake pads correctly.

Workers tackled this second quality defect and the towers have now returned to operating with minimal noise.

Coopers Gap Wind Farm will not be operating during thunderstorms.

The meeting was told that to ensure the safety of the wind farm’s personnel, wind farm employees stop working whenever a lightning strike is reported anywhere within an 80km radius of Coopers Gap.

And if a lightning strike is reported within a 40km radius of the towers, the entire operation is shut down until the storm passes.

This protocol is designed to ensure safe operation of the wind farm year-round.

Coopers Gap Wind Farm workers responded to a recent request for assistance from Jandowae residents when their town experienced flooding.

In mid-February, a heavy storm dumped 260mm of rain over the town, which caused Jandowae Creek to overflow.

The flooding was enough to prompt alarm at Western Downs Council, which issued an emergency alert warning residents to be prepared to leave.

But in the end only about five houses were affected, and none of them severely.

However, the flooding created a mess around the township.

So when a call was made to the wind farm asking for assistance, workers responded.

In all, Coopers Gap workers spent two days helping Jandowae locals clean up the township, and were rewarded with a community barbecue after it was all over.

“We are always ready to assist our wind farm communities when we can,” an AGL spokesman said.

“In this case, the rain meant we couldn’t work at the wind farm, so we were able to help Jandowae instead.”

The CCC will continue to meet quarterly until three months after the wind farm is completed.

It is then likely meetings will be scaled back to twice each year unless special circumstances require extra meetings.

The meeting heard the group will meet in June, September and December this year.

Members were asked to consider what the most suitable meeting schedule should be in 2021 so this could be discussed at the December meeting. 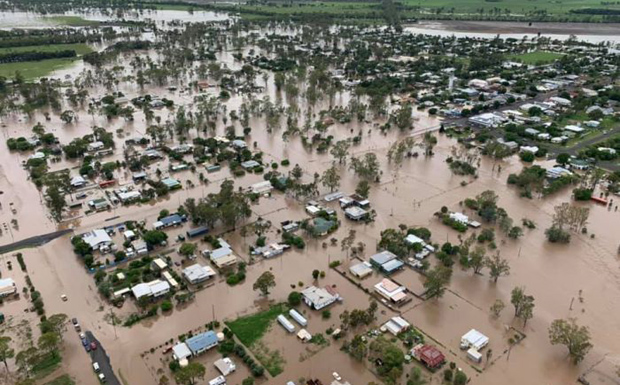 Workers from the Coopers Gap Wind Farm helped Jandowae residents clean up after a February storm dumped 260mm of rain over the area (Photo: QFES)