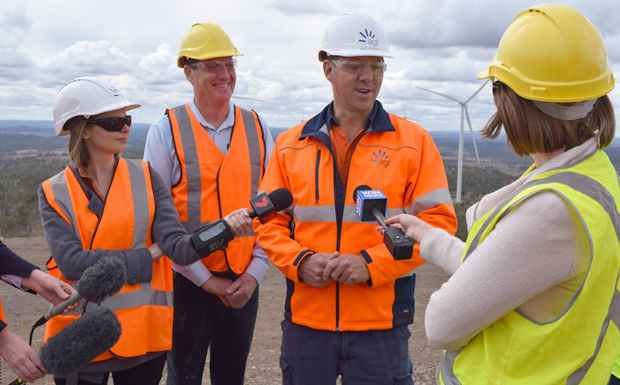 Energy Minister Dr Anthony Lynham paid a return visit to the Cooper’s Gap Wind Farm on Thursday to inspect progress on the site.

While the official reason for his visit was to mark the start of the wind farm supplying power to the grid, he said he had a genuine, personal interest in seeing how the project was unfolding.

He admitted he was possibly Australia’s biggest fan of renewable energy and was confident the State Government’s target of supplying half of Queensland’s power requirements from renewable energy sources by 2030 would be achieved.

Coopers Gap was one of almost 30 renewable energy projects already under way in Queensland or in the final stages of approval.

Dr Lynham was keen to stress, however, that he also believed coal had a long future it and didn’t think the expansion of renewables would mean a reduction in coal mining.

“When Coopers Gap is finished it will supply as much energy as a coal-fired power station,” he said.

“But let’s not forget that 80 per cent of Queensland’s coal is metallurgical coal (ie. coal used in steel making), and we could be exporting it for the next 100 years.”

Dr Lynham said the State Government was also keenly aware of the importance of jobs in regional areas.

It had approved the controversial Adani coal mine in central Queensland chiefly because of the jobs it could bring to that area.

In the South Burnett, Coopers Gap will bring 20 full-time, permanent jobs when it comes into operation mid-way through next year, he said.

And the recently approved Kingaroy Solar Farm would bring more jobs, which was something that shouldn’t be overlooked.

Dr Lynham said while there was still uncertainty in some quarters about adding renewables to the energy mix, he was confident this would disappear over the coming decade.

By 2030, he said, most Queenslanders would be eating Cornflakes at their breakfast tables unconcerned about where their power came from, and would be just as comfortable with renewable energy as they were with coal-fired power stations today.

“The Greens would like to see a higher renewable energy target by 2030 than the one we’ve set, but I think that would just lead to blackouts,” Dr Lynham said.

And nuclear power was too expensive and carried far too many risks.

Dr Lynham said the State Government had ruled both these options out, and was comfortable with its current mix of coal, wind, solar and hydro.

“We thank and greatly appreciate the continued support and co-operation of all key stakeholders such as the Queensland Government, the Western Downs and South Burnett Regional councils and local landowners, which have been crucial in getting to this stage,” Mr Johnson said.

“We also greatly appreciate the support and guidance of the Australian Energy Market Operator and Powerlink Queensland to finalise the grid connection and ensure the wind farm is safely commissioned.”

He said a significant proportion of the investment in this project from AGL and the Powering Australian Renewables Fund has been spent with local businesses and contractors.

“Although the commissioning process is continuing, almost 50 of the 123 turbines have now been installed and at full capacity, this 453MW wind farm will generate enough electricity to power 264,000 average Australian homes.” 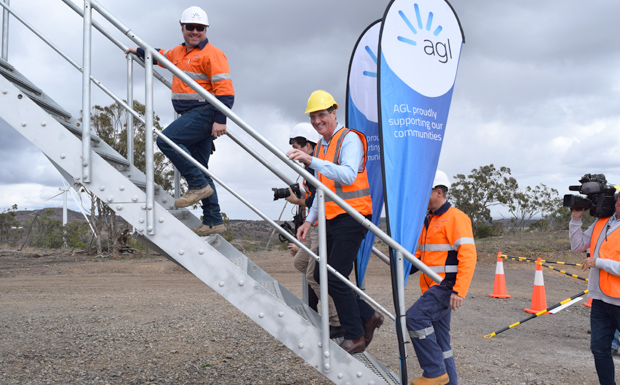 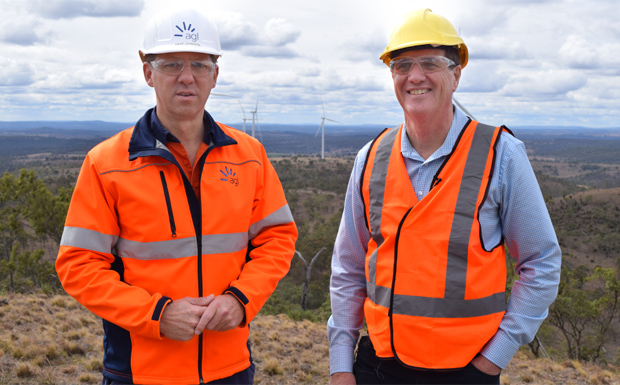 After the media scrum subsided, Dave Johnson took the Minister up a nearby hill to see a sweeping view across the wind farm

A 60-second video showing the Coopers Gap Wind Farm in late July, when 48 of the wind farm’s 123 turbines had been erected: