A Centenary Of History On Display Ambulances lined up outside the Kingaroy Ambulance station in 1935 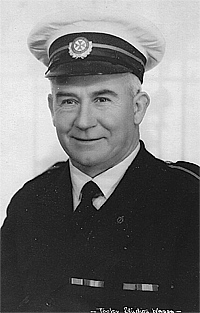 The modern fleet of ambulances that are called to Kingaroy emergencies in 2020 bears no resemblance to the first vehicles that came to residents’ aid back in 1920.

In that far off time, the ambulance was a T Model Ford and the patient was held on the stretcher by the Ambulance Superintendent, Michael “Mick” Loth, who was known fondly to Kingaroy citizens as “Dr Mick”.

Memories from across the past 100 years will be shared at a special centenary celebration being held at the Kingaroy Ambulance Station in Edward Street from 9:00am on Saturday.

Among those wishing the Kingaroy celebration well is retired Catholic priest Fr Tony Loth, son of Mick Loth who was the founding superintendent of the Kingaroy Ambulance Transport Brigade.

Fr Loth lives in Wagga Wagga in NSW, where his father transferred as Ambulance Superintendent in 1927 after his time in Kingaroy.

Mick Loth was born in 1893 in Ravenswood in North Queensland.

He and his brother Joseph served as medical orderlies during World War I – Joseph with the 3rd Australian Light Horse Field Ambulance at Gallipoli and Mick with the Sea Transport Service.

“My father did five voyages to England and back, caring for soldiers going over and wounded coming back,” Fr Loth told southburnett.com.au

After the war, Joseph and Mick headed to Biggenden looking for work as their brother Jacob was manager of the local butter factory.

When the Spanish Flu hit Australia, Mick began teaching people in Biggenden how to nurse their sick at home. He made such an impression that when the vacancy came open in Kingaroy for an Ambulance Superintendent, he was offered the job.

“The year 1920 was an eventful year for Michael,” Fr Loth recalled.

“He was appointed to establish an ambulance service in Kingaroy. In February, his mother died in Ravenswood, where the Loth family had lived since arriving in Australia from Germany in 1888. And he had plans to marry a Biggenden lady, Josephine Burns, who was a teacher at the Degilbo school. They were married in Biggenden in May, 1920.

“When Michael first arrived in Kingaroy, he lived for some short time in a local hotel, since there was not yet any residence or location for the intended new ambulance service.

“It must be remembered that any local ambulance service was supported financially entirely by the community. A great deal of time and effort was spent simply on raising money!”

The fundraising must have gone well …

By 1922, the Kingaroy Ambulance had a new vehicle, a Dodge purchased for £630 according to a report in the Maryborough Chronicle, and a building site bought for £25. The report also notes that Supt Loth had earned the local nickname Dr Mick “who most certainly has carried out the motto of the brigade, ‘Ever Ready’.”

Mick and Josephine had four children during their time in Kingaroy.

Meanwhile, in NSW, a new ambulance service had taken its first steps under the leadership of Superintendent Fred Roffe in Wagga Wagga. Supt Roffe had come from Maryborough (the parent centre of the Kingaroy QATB) and had known Mick very well.

Supt Roffe suggested Mick was the ideal man to establish the new service.

“And so Michael Loth found himself taking up the new challenge, and arrived in Wagga Wagga in July, 1927, where the family has remained ever since,” Fr Loth said.

“Four more children were added to the family in Wagga Wagga, of whom I am the youngest and the sole surviving member.”

Mick Loth made his mark in Wagga Wagga after he left Kingaroy.

In 1945, he celebrated his silver jubilee as an Ambulance Superintendent and recalled his time in Kingaroy in an article in a Wagga newspaper, The Daily Advertiser:

The first ambulance car placed at the disposal of the Kingaroy service in 1920 was a T Model Ford which was commissioned in August of that year. From March until the arrival of the Ford car, cases were transported on an ordinary hooded car of that period, with the superintendent sitting on the back seat and holding the patient on the stretcher.

Such were the conditions that Mr Loth experienced and on which he was to build up in the minds of the public what an ambulance service could mean. Undaunted, and facing many difficulties, disappointments and public apathy, he continued with his work, and when the Ford arrived it was considered one of the most up-to-date ambulance cars of that time.

The Daily Advertiser also reported his farewell in October 1953:

More than 300 people packed St Joseph’s Hall last night to pay tribute to the 27 years of service Mr. M. P. (‘Mick’) Loth has given Wagga as Superintendent of the Ambulance Brigade … The Mayor, Ald W. F. Dunne presented Mr Loth with a cheque for £925, the proceeds of a testimonial fund raised among the citizens of Wagga and district.

“I rejoice with the people of Kingaroy as they celebrate the centenary of their ambulance service, and am proud to claim that my father was instrumental in its establishment,” Fr Loth said.

Everyone is invited to join Kingaroy QAS and the Local Ambulance Committee in celebrating the Kingaroy centenary on Saturday.

“Axel The Ambulance” will there for the children, as well as face-painting.

The official opening – with morning tea and the cutting of the centenary cake – will be at 10:00am.

As well as historic photos and memorabilia, ambulance vehicles will also be on display, including a 1970 Ford Fairlane which retired from service in 1993; and a 1980 Holden one tonner which retired in 1991.

The Holden had an “interesting” life, at one stage ending up on its roof on the railway tracks at Milton.

The centenary celebrations are being organised by the Kingaroy Local Ambulance Committee in conjunction with the QAS. A Kingaroy ambulance being pulled across the Boyne River, circa 1928 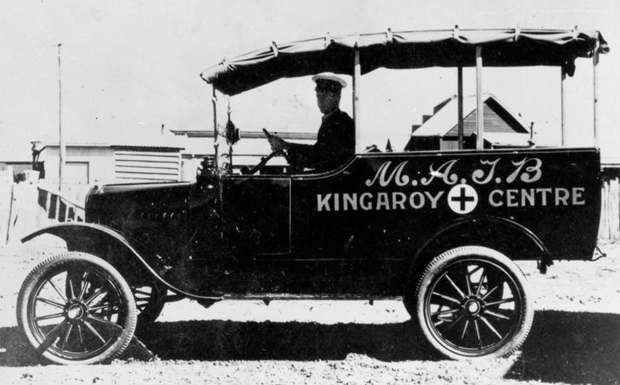 A Kingaroy ambulance, circa 1925 … the figure behind the wheel is quite possibly Supt Mick Roth 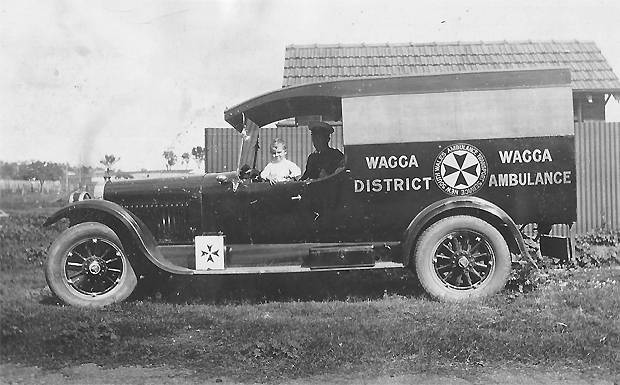 Supt Mick Loth and son Michael at Wagga Wagga in 1928

One Response to A Centenary Of History On Display