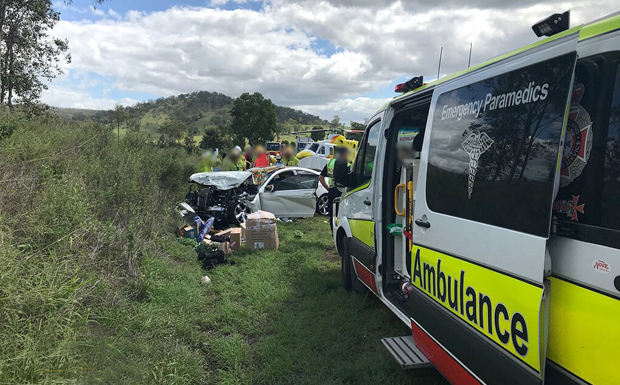 Emergency service workers had to cut the trapped woman free from the car (Photo: RACQ LifeFlight)

A driver charged after a crash on the Wide Bay Highway earlier this year in which an elderly woman was seriously injured has received a suspended prison sentence.

Emergency services were despatched to the corner of Southern Road and the Wide Bay Highway near Turpentine Creek at Woolooga about noon on April 1.

They found a car and hay truck on the site, with a woman aged in her 70s still trapped inside the sedan.

Hydraulic cutters were used to free her and she was then airlifted to hospital by the RACQ LifeFlight helicopter with serious chest and leg injuries.

Neil Schroder, 60, from Langshaw, pleaded guilty in Gympie Magistrates Court on Tuesday to driving without due care and attention causing grievous bodily harm.

The court was told the crash occurred as Schroder reached over to get a bottle of water from the passenger seat of his truck.

The female driver of the other vehicle suffered broken ribs, a fractured hip and leg injuries in the head-on collision.

The court heard she was now in a wheelchair.

Schroder was sentenced to two months jail, suspended for nine months, and disqualified from driving for six months.