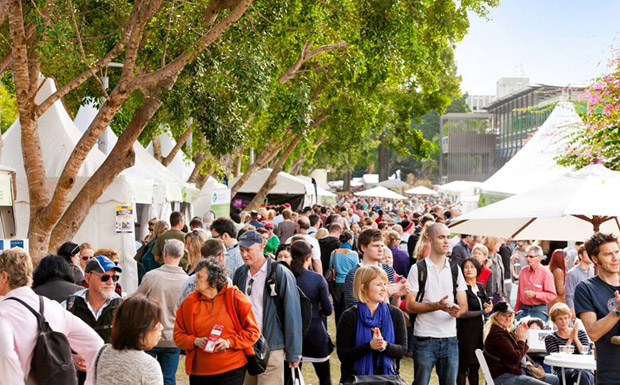 An estimated 84,000 visitors attended Regional Flavours in 2018, and the food festival’s organisers are hoping to break that record this weekend (Photo: SBRC)

This weekend four wineries, four local food producers and two chefs will be flying the flag for the South Burnett at Regional Flavours on Brisbane’s South Bank.

The South Burnett has exhibited at Regional Flavours since the festival began in 2009 with the aim of encouraging more Brisbane residents to travel to the region.

It is supported by the South Burnett Regional Council, which assists local exhibitors with their costs.

This year Crane Wines, Clovely Estate, Kingsley Grove and Nuova Scuola will be showcasing South Burnett wines, and Bunya Red Farm, The Peanut Van, Chinchilli and The Sauce Man will be displaying capers, peanuts and sauces to festival-goers.

As usual, South Burnett Food Ambassador Jason Ford will be providing information and entertainment for the crowd, appearing on the Queensland Taste Stage on Sunday at 11:10am to discuss local foods.

And in the “Flavours of the Regions” section of Regional Flavours, Jason will also be offering a new version of his popular sticky pork belly wrap, which will be served as a soft taco.

This year he’ll be joined by chef Roberta Schablon, from the Saucy Fork, who’ll be offering a “Flavours of the South Burnett Box”.

The South Burnett offerings will be squaring off against rival culinary treats from the Lockyer Valley, Logan, the Scenic Rim and Redlands.

Last year Regional Flavours drew an estimated crowd of 84,000 over the weekend, and this year organisers hope to exceed that figure.