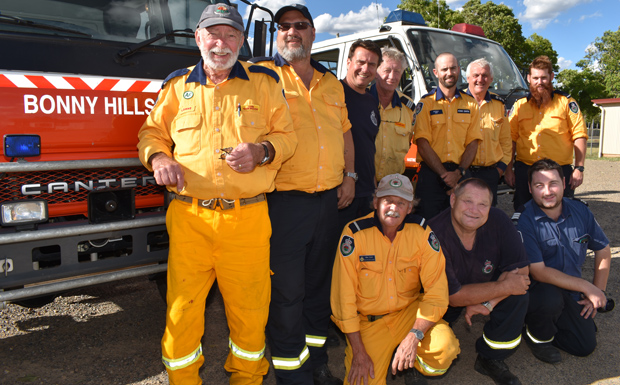 Volunteers from a mix of NSW rural brigades are currently based in Kingaroy, manning trucks from Bonny Hills and Wauchope

NSW firefighters have taken up guard in the South Burnett and North Burnett to lend a hand during the current very high fire danger period.

Trucks from Taree, Country Club (Woolgoolga) as well as the Mid North Coast were spotted in Kingaroy on Thursday.

Several were on their way north to help out, but trucks from Wauchope and Bonny Hills have been stationed at the Kingaroy Red Ants clubhouse in Kingaroy.

The crews had travelled 14 hours to get to the South Burnett.

They came from a number of rural brigades around NSW including Wauchope, Bonny Hills, Marlee, King Creek and Lake Cathie.

When southburnett.com.au dropped in on Thursday afternoon, they had not yet been called to any jobs but were going to be “on call” overnight. 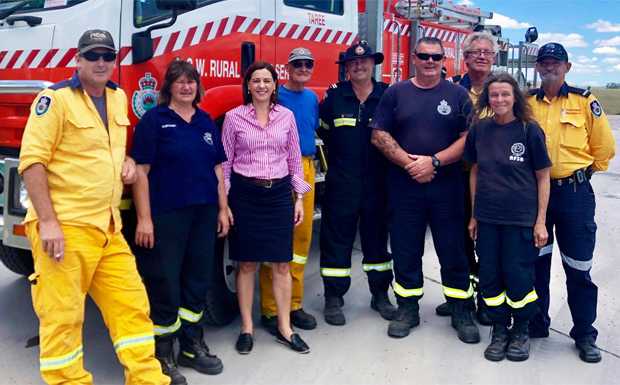 Member for Nanango Deb Frecklington ran into a bunch of NSW volunteers at Murgon who were heading north to Gayndah (Photo: Nanango Electorate Office)

After a very busy Wednesday, South Burnett firefighters had a quieter time on Thursday.

Rural brigades were called to a grass fire burning near Bellbird Road at Hodgleigh on Thursday morning. The fire, believed to have been started by a slasher, was quickly brought under control and extinguished.

The fire that has been burning at Googa Creek, south of Blackbutt, was declared closed on Thursday.  This fire had been burning near Spelling Gully Road since Sunday afternoon.

Firefighters monitored the area where a large grass fire started near Runnymede Road and McCallum Road, Runnymede, on Wednesday afternoon. Multiple fire crews and a water bomber worked to bring it under control on Wednesday night.

Fire crews were also monitoring a fire near Ettrickdale Road at Booubyjan which began on Sunday afternoon, and a fire near Beeron which briefly closed the Mundubbera-Durong Road on Wednesday.

About 10:00am on Thursday, firefighters were called to a blaze near Running Creek Road at Kilkivan.

Smoke was affecting the nearby area.

At 5:30pm, six fire crews were still at the incident.