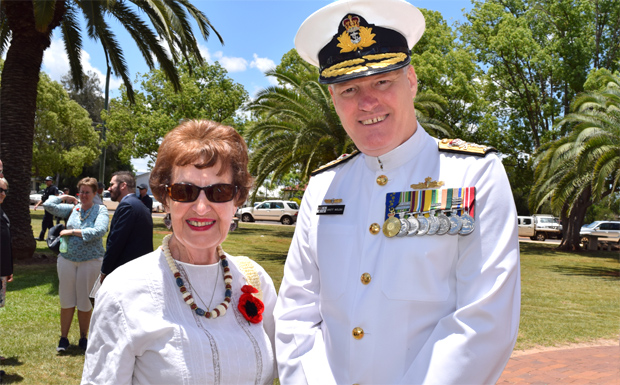 Kingaroy Quota Club president Marie Shaw chatted with Rear Admiral Brett Wolski AM after Kingaroy’s Remembrance Day ceremony concluded … Rear Admiral Wolski was this year’s speaker at the service, where he gave a solemn reminder of the terrible effects World War I had on Australia

There have been special events held in almost every South Burnett town during these four years of remembrance.

All these commemorations culminated at the weekend with the Centenary of the Armistice.

Exactly 100 years ago, the documents that finally halted the shelling were signed in a railway carriage in the Forest of Compiègne, about 60km north of Paris.

World leaders gathered in Paris and London at the weekend to mark this anniversary with much pomp and ceremony.

The gatherings may have been smaller in the South Burnett, but they were no less dignified or heartfelt …

Blackbutt marked this year’s Remembrance Day with three activities over the weekend.

On Saturday, the town staged a Country Fair in the area between Nukku Nook and the Blackbutt Memorial Hall which kicked off at 8:00am and lasted until late afternoon.

The Fair allowed residents and visitors to browse an assortment of market stalls.

Later that night, attention turned to the Blackbutt Memorial Hall where an Armistice Centenary Ball drew an estimated crowd of 200.

The hall was decorated with posters and flags and the front of the stage was covered with sandbags to resemble a trench.

On Sunday, the town marked Remembrance Day with a formal ceremony at the Blackbutt War Memorial in Coulson Street.

Members of the public laid wreaths and paused to remember the sacrifices made by the volunteers who enlisted to fight in “the war to end all wars”. 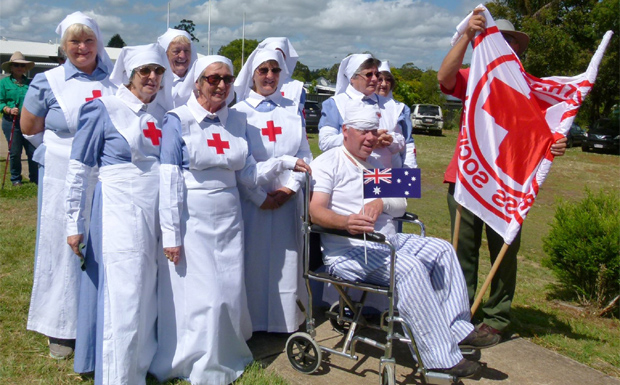 Blackbutt marked Armistice Day with a Country Fair on Saturday, where members of the Blackbutt-Yarraman QCWA paid tribute to WWI nurses … the Fair was followed by an Armistice Centenary Ball at Blackbutt Memorial Hall on Saturday night 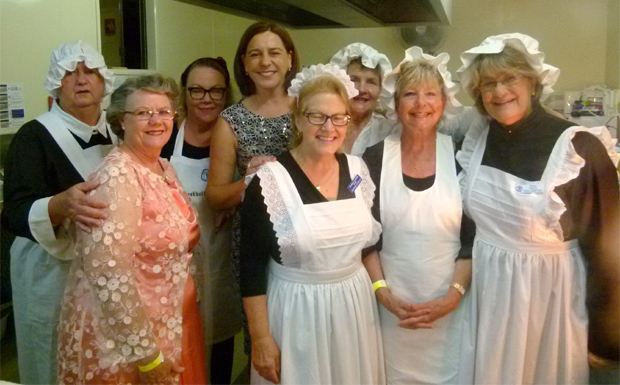 QCWA members changed costumes to help with the Centenary Ball’s catering, and received a surprise kitchen visit from Member for Nanango Deb Frecklington 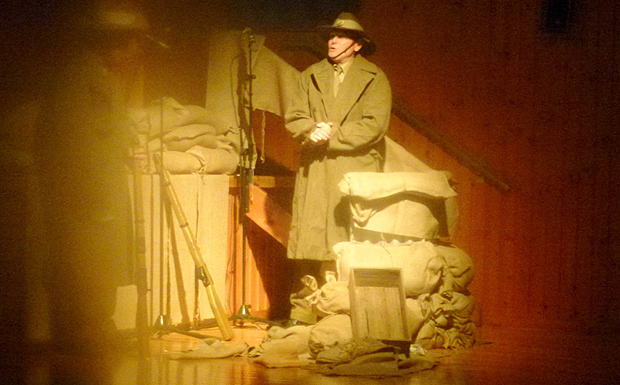 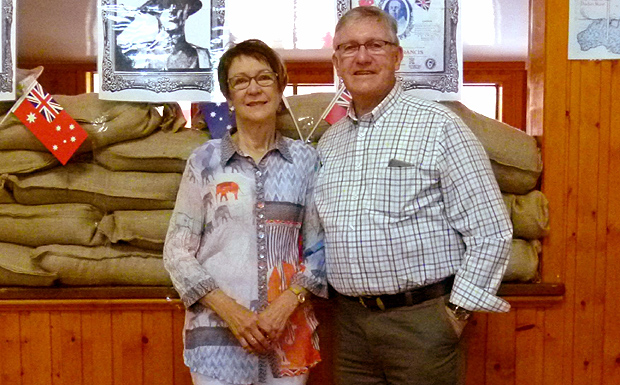 At Cherbourg, a small group of local residents and visitors in town for “Golden Oldies” gathered at the Anzac Memorial to observe a minute’s silence at 11:00am.

Pastor Albert Bowie, from Brisbane, led the service, praying for those who have gone before, and their families today.

“Never forget what they have done,” he said.

“My heroes are on the wall. They fought for us so we can have a lovely community here today,” he said.

The service was an opportunity for residents to inspect the new Poles which have been erected near the memorial, crafted by Robert ‘Rocko’ Langton.

A new gate has also be erected at the entry to the area, remembering former resident, the late Bill Turner, whose vision led to the establishment of the war memorial. 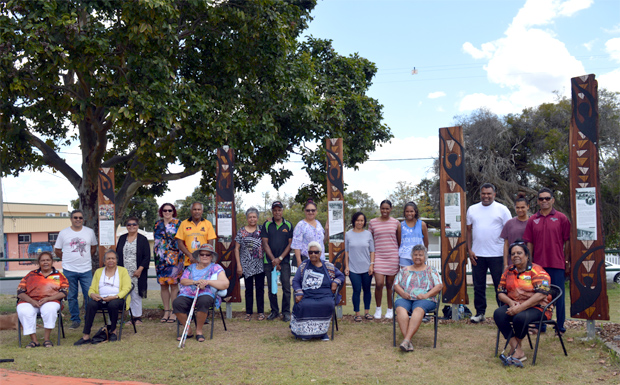 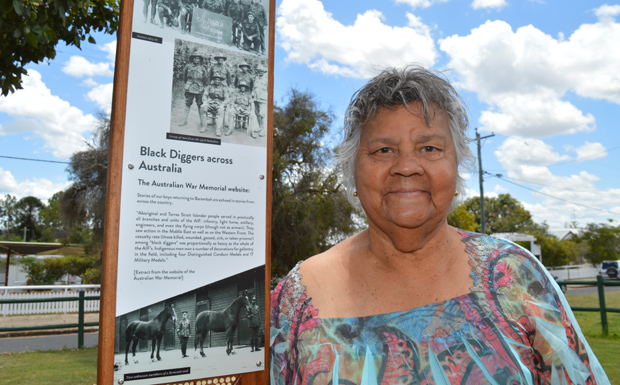 Iris Glenbar, from Widgee, with one of the Poles … it took Iris 40 years to track down her uncle, Lighthorseman Private Valentine Ayr (recorded in the war records as Hare) who enlisted from Townsville but came to Cherbourg after the war – where his mother, three sisters and two brothers had been sent, splitting the family 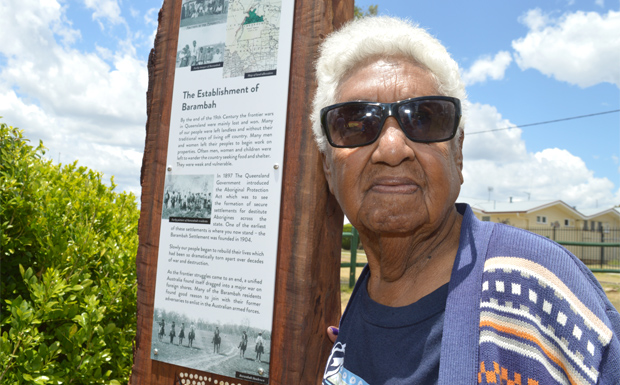 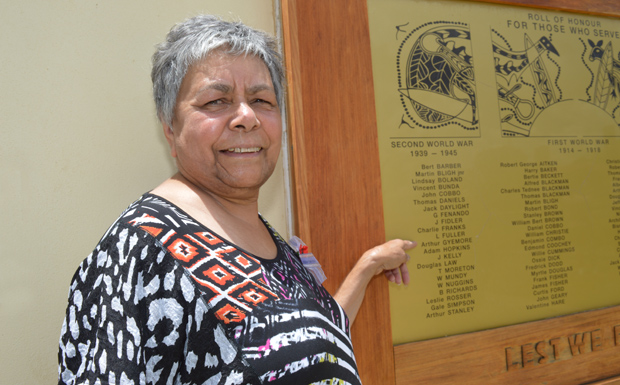 Lesley Williams, who also spoke at the service, points to the name of her birth father Arthur Gyemore, who served in World War II, on the Roll Of Honour 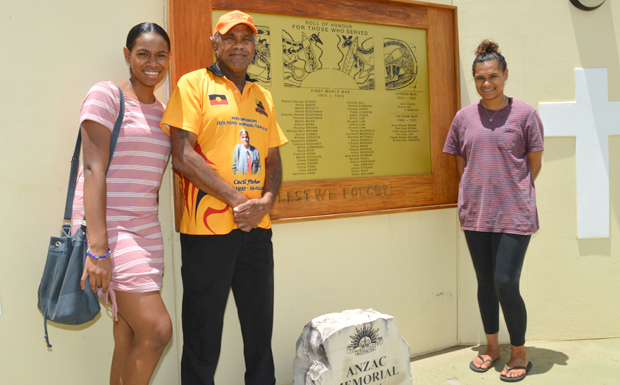 The morning’s commemorations began with a march from the former croquet field to the Rotunda, escorted by piper Ross Page and flag-bearers.

Rear Admiral Wolski said 51 people from the Kingaroy district had enlisted to fight, and they suffered the same horrendous rate of casualties as volunteers from other Australian towns.

The effects of WWI were so terrible, he said, that they were still being felt in Australia decades after the war ended.

Mr Cockburn delivered The Ode and Matt Phillips, from Kingaroy State High School, played The Last Post before the minute’s silence and Reveille.

Rev Dr David Ferguson, from Kingaroy’s Uniting Church, then offered the Closing Prayer and Benediction before wreaths were laid on the Catafalque and the service concluded.

Afterwards, guests and veterans adjourned to the Kingaroy RSL for refreshments. 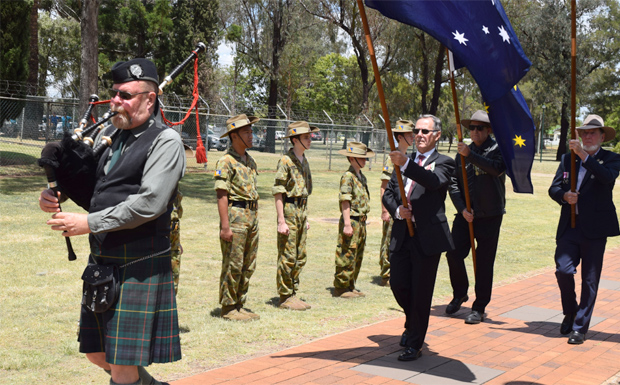 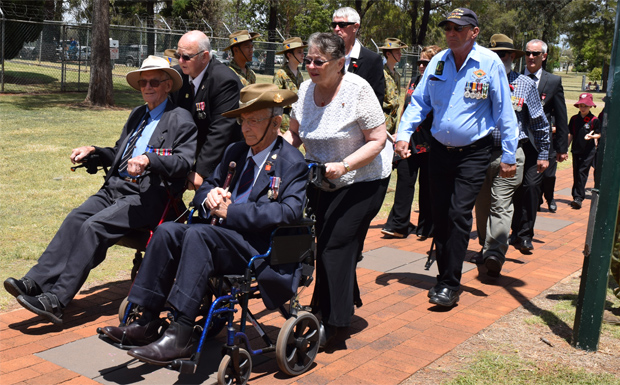 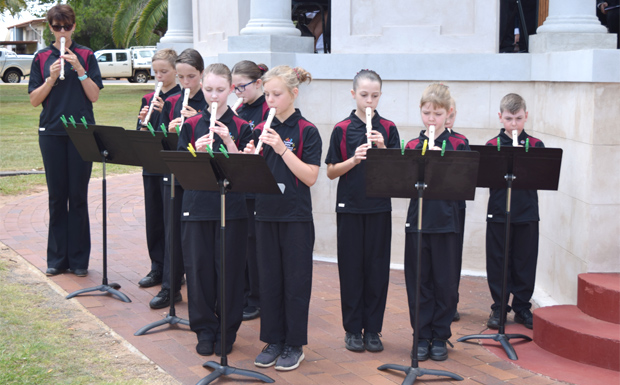 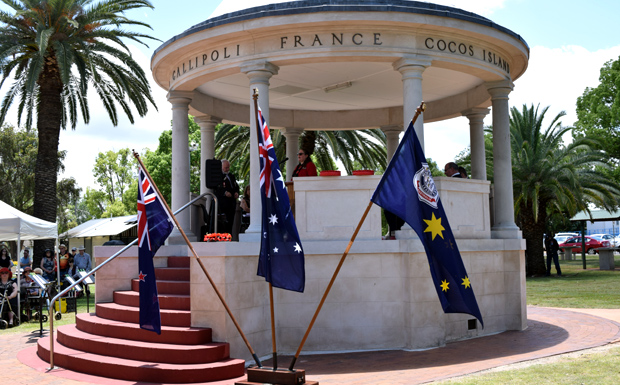 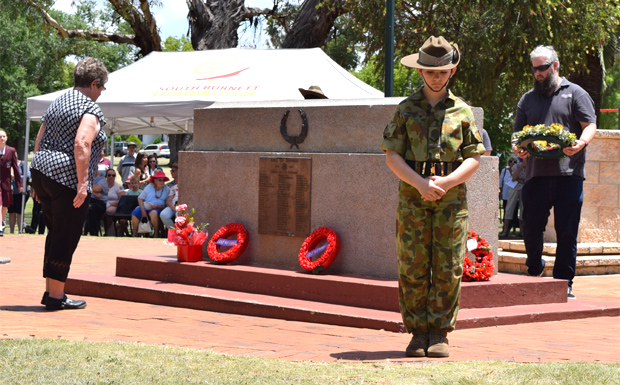 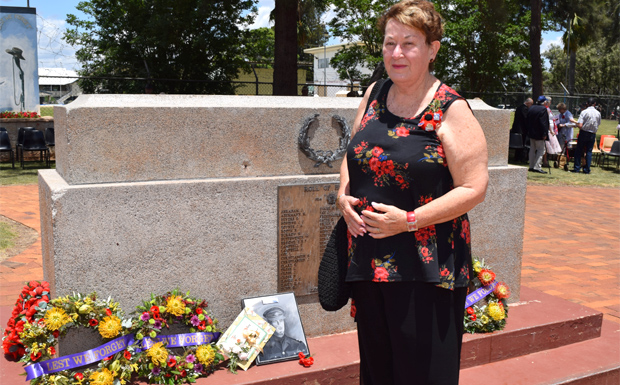 Denese Brown laid a wreath and a sketch in honour of her grandfather Daniel Roots, from Cloyna, who served in the 15th Australian Infantry Battalion during WWI

Major Phan, who arrived in Australia as a child with his refugee parents, also spoke at the Sunday morning commemoration service at the Murgon monument while soldiers from his squadron mounted a guard.

The service followed a short parade along Lamb Street.

After the services, invited guests retired to the Murgon RSL Club to enjoy lunch. 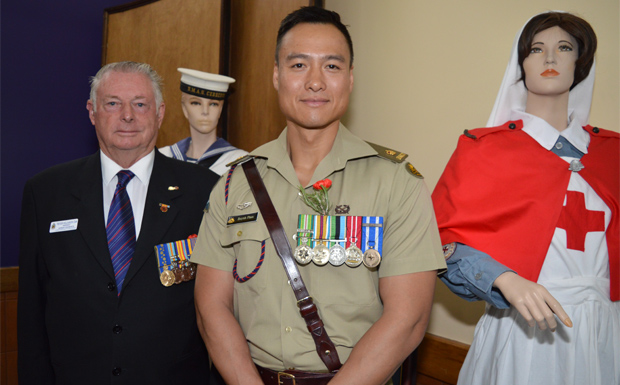 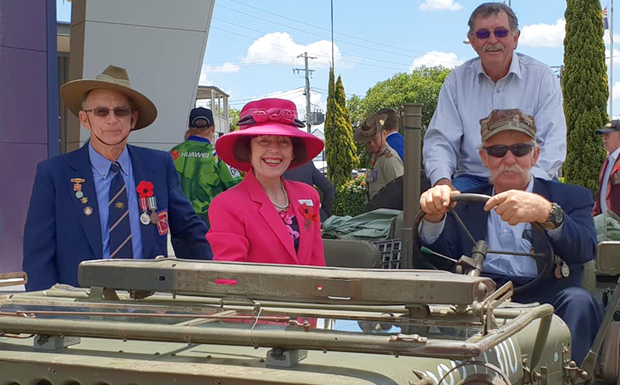 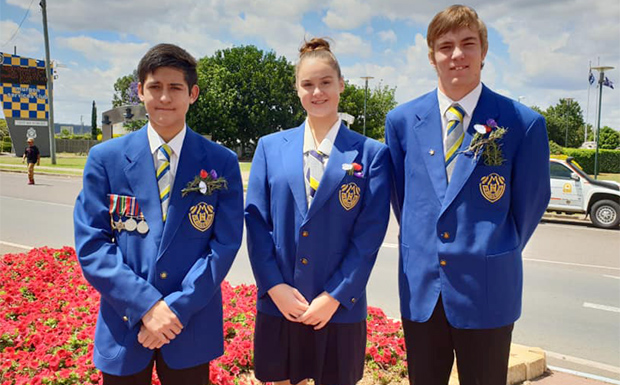 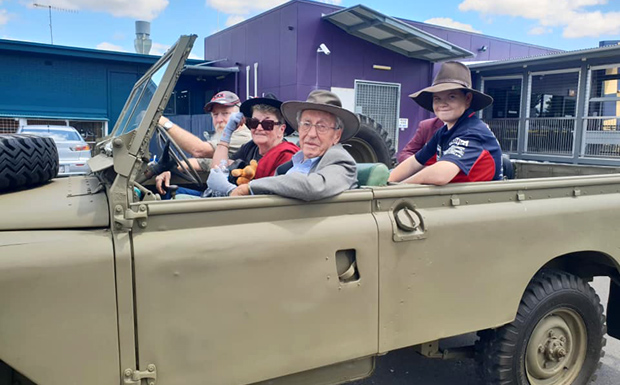 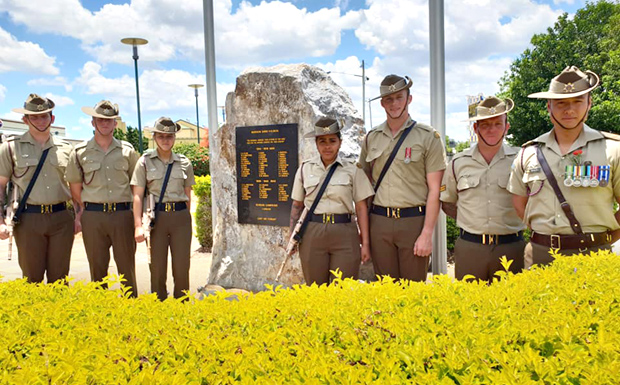 Nanango held three days of activities to mark the Armistice Centenary, beginning on Friday night with the launch of historian Liz Caffery’s book “The Memory Tree”.

This was followed on Saturday night with an Armistice Centenary Ball at Tara’s Hall, and then a traditional Remembrance Day service on Sunday at the Drayton Street War Memorial organised by members of the Nanango RSL Sub-Branch.

Division 1 Cr Roz Frohloff and student leaders from Nanango State High School were among the many people who laid wreaths to honour the fallen. 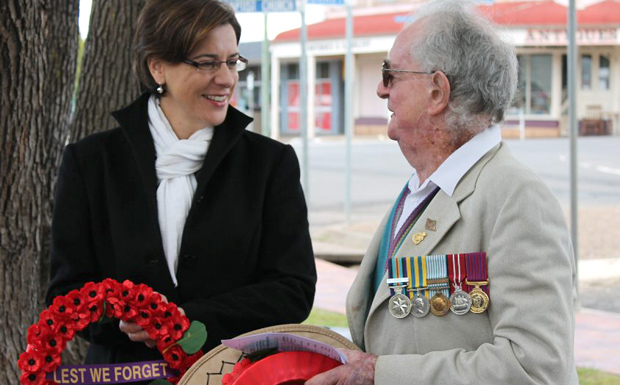 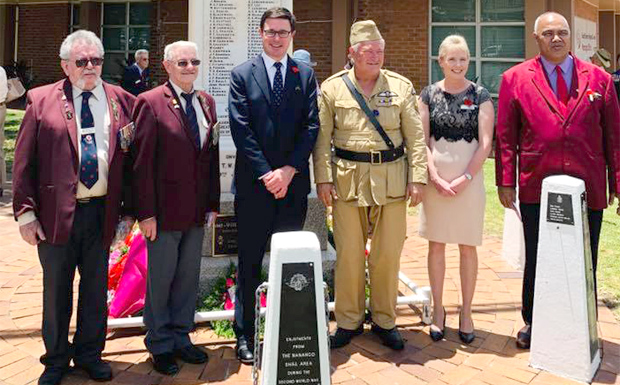 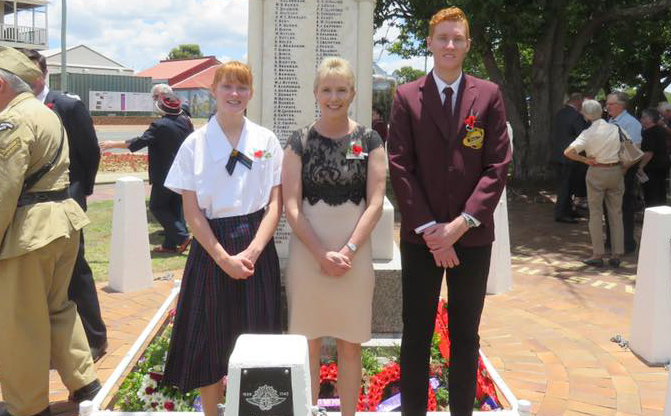 Cr Ros Heit laid a wreath on behalf of the South Burnett Regional Council, which joined others laid by members of the public who gathered at the War Memorial outside Wondai Town Hall.

Afterwards, guests adjourned to the nearby Wondai Diggers Club for refreshments and fellowship. 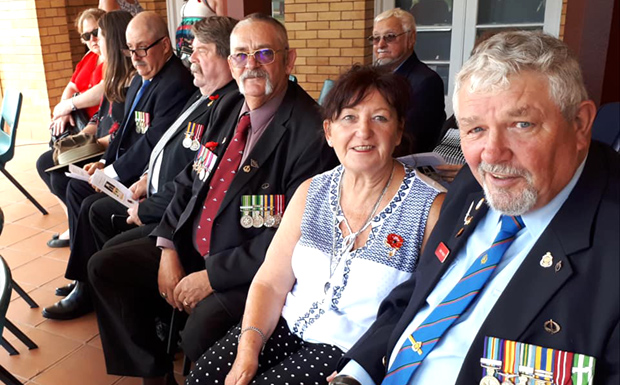