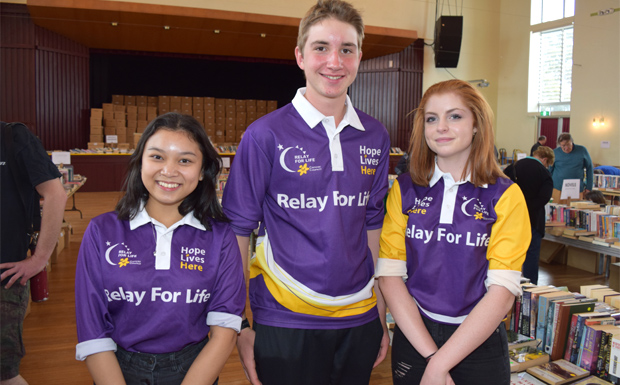 Kingaroy’s Juliana Evangelista, Harry Tessmann and Emily Kerr were among the 22 volunteers that helped Taabinga Rotary out out at this year’s Bookarama

This year’s Bookarama – Taabinga Rotary’s major annual fundraiser – was one of the best in the event’s 10-year history.

While club members are still tallying up the final total, they estimate Bookarama 2018 raised as much as $14,000.

This money will now be split between the Royal Flying Doctor Service, the Kingaroy Hospital Auxiliary and the Buy A Bale drought relief program.

Taabinga Rotary spokesman Darryl Roberts said the popular two-day event had only run this year because of the help of volunteers.

“Our club only has 18 members and not all of them are available when Bookarama is on,” Darryl said.

“However, we were very grateful that 22 volunteers from Kingaroy State High School, the Kingaroy and Proston Men’s Sheds, Boehringer Ingelheim and friends of Rotary stepped forward to help us out.

“These extra volunteers helped make this year’s event one of the best we’ve run to date.”

“Apart from raising money to help good causes, one of the main aims of Bookarama is to encourage people – especially children – to read,” Darryl said.

“So we sell children’s books in A4 paper boxes and encourage mums, dads and kids to come in and fill up a box for $5.

“I don’t know exactly how many books families go away with in an average box, but it probably works out at a few cents per book, and it encourages children to start reading early.”

The club collects books through a regional network of drop-off points they’ve set up over the past decade.

They do this every Thursday for 11 months to get complete carton-loads of books ready for the next Bookarama.

Typically, each event sees between 500 and 600 of these carton-loads put on display for book enthusiasts to browse and buy.

The proceeds of Bookarama always go to help other not-for-profit groups and good causes.

However, this may be the last year Bookarama will be held at Kingaroy Town Hall due to rising hall hire costs.

“The Council used to make the Town Hall available to us at no charge, but this year they told us we’d have to pay 50 per cent of the normal hire fee, which was $660,” Darryl said.

“Fortunately councillors Kathy Duff, Danita Potter and Roz Frohloff all chipped in from their Discretionary Fund to cover this year’s costs.

Darryl said the club understood Council had ongoing maintenance costs for the Town Hall, but those costs weren’t going to disappear if the hall sat empty.

“At the end of the day, our volunteers contribute hundreds of hours of their own time to make Bookarama happen,” Darryl said.

“We not only make money to help other groups, but we encourage community volunteering and we also encourage our communities to read.”

He believed there was an overlooked value in those things which outweighed the Council’s need to recoup maintenance costs, and that value would be what Council would have to pay in staff wages to achieve the same outcomes.

Taabinga Rotary will also consider the possibility of making Bookarama a joint venture with another group in the future.

“Like many groups, we have an ageing membership,” Darryl said.

“So if we want Bookarama to continue in the future – and we do – we need to look at how we can make it sustainable over the longer term.

“One idea might be to partner with another group that has a younger membership, and another might be to ask for more volunteers to help out on Bookarama weekend.

“Many people these days don’t have enough free time to commit to attending regular meetings, so they don’t join those types of groups.

“But there are a lot of people who are more than happy to commit a day or half a day a year to help a good cause, so that’s another possibility we can look at.”

One Response to Bumper Year For Bookarama