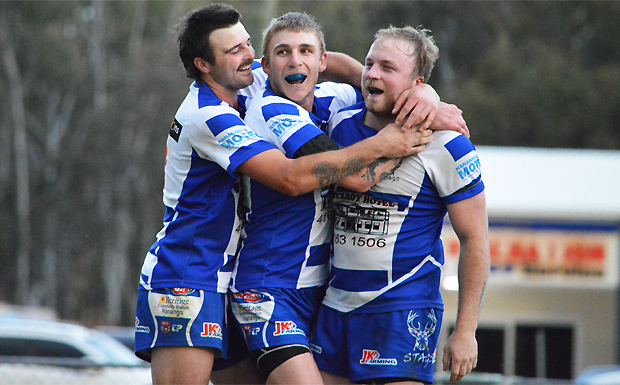 The home crowd couldn’t have been happier as the Stags stomped on the Red Ants in the A Grade South Burnett Rugby League Grand Final played in Nanango on Saturday.

The Stags have looked fitter, faster and more lethal than all other South Burnett teams this season. The only question was going to be the margin of their victory, but few would have been bold enough to predict Nanango would keep Kingaroy scoreless.

The A Grade Grand Final topped off a big day of rugby league at Nanango, with the Grand Finals for the Under 12s, Under 14s and Under 16s played earlier in the day.

The large crowd of vocal Nanango supporters was joined at the ground by a strong contingent from Chinchilla fans as well as Kingaroy and Cherbourg fans. 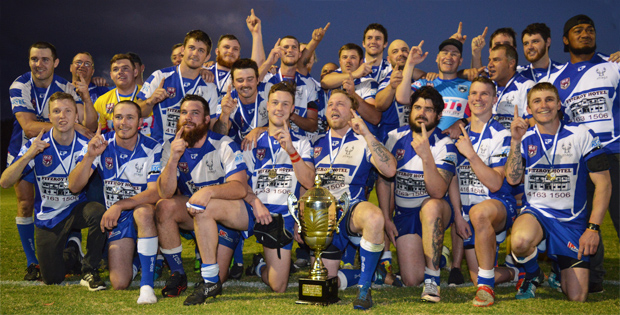 The triumphant Nanango Stags celebrate their victory after the trophy presentation 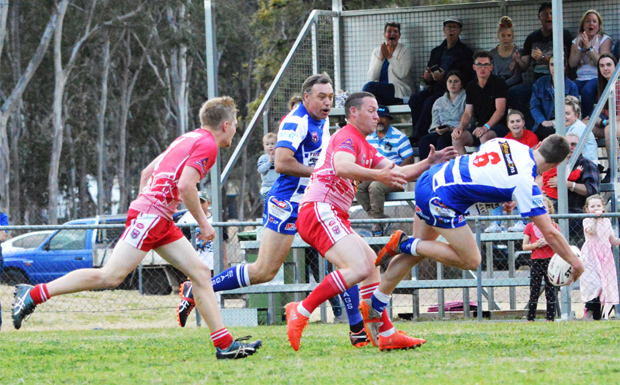 Brent Greenslade took an intercept near his own line, ran the length of the field and then got away a miraculous pass mid-air to set up Warwick Keating on the inside to score

The final scoreline doesn’t reflect it, but Nanango didn’t have it all their own way during the A Grade Grand Final.

Nanango started strongly with a try within the first minute, followed 10 minutes later by their second.

Then the Red Ants gained some possession and launched several raids on the Nanango line, but to no avail.

After the break, Kingaroy attacked again but it was another no try.

As the Stags piled on more points, the Red Ants tried everything, including kicking early in the tackle count in a bid to gain ground.

But nothing seemed to work and the Nanango defence was impenetrable.

As the clock ticked down, tensions built.

Two fiery encounters involving multiple players from both teams resulted in Nanango’s Shane Argent being sent from the field for an early shower … two minutes from the siren, and accompanied by the cheers of the crowd. 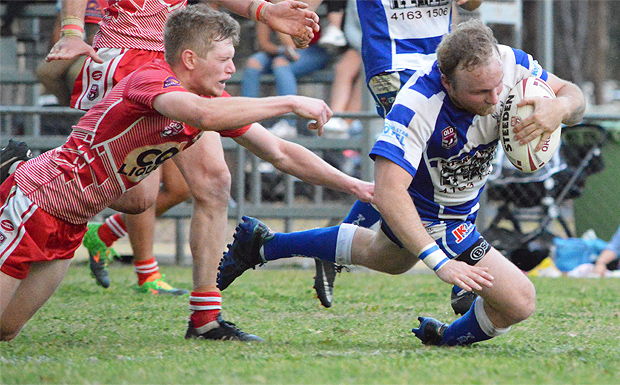 Blake Harvey scores the second of his two tries for Nanango 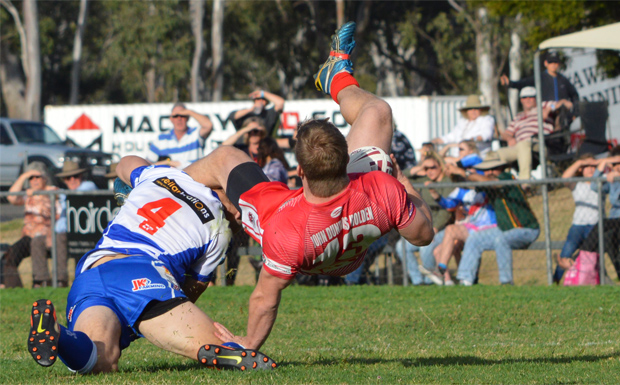 Nanango’s defence had Kingaroy off balance all game … 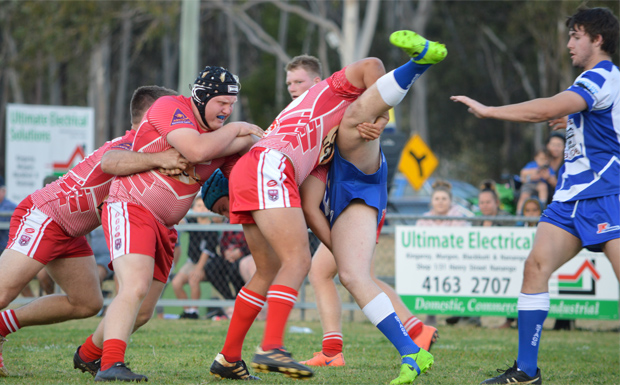 … but Kingaroy also gave as good as they got 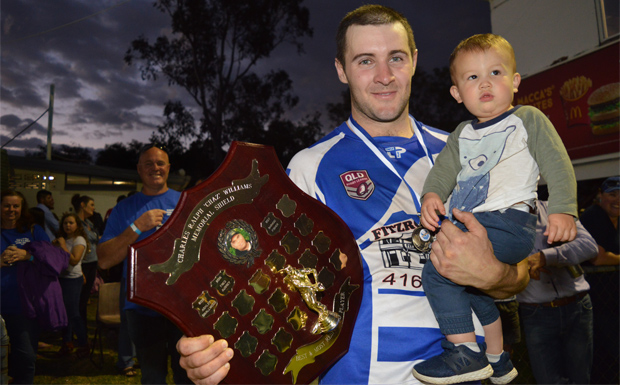 Pat McCallum, with nephew Mitch Mangan, 17 months, was presented with the Chaz Williams Memorial Shield for “Best & Most Respected Player” … Pat is the 4th generation of the McCallum family to play for the Stags 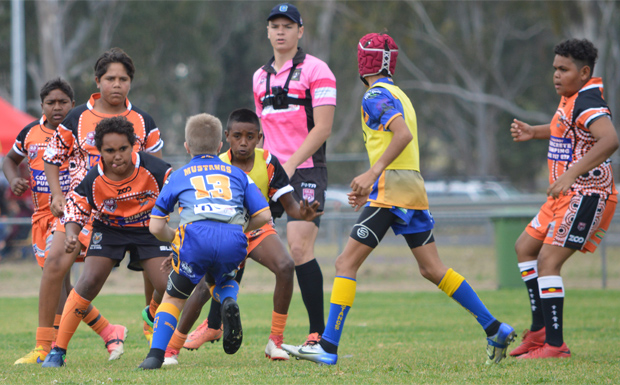 Under 12s minor premiers Murgon kept their winning ways on target on Saturday, defeating the Cherbourg Hornets 28-12 in their Grand Final clash.

The Mustangs only lost one game during the season (to Cherbourg on August 12) and when they met in the semis, Murgon dominated 16-0.

Murgon may have started as favourites, but the final scoreline didn’t truly reflect the closeness of the game.

At the midpoint of the second half, Alonzo Purcell scored his second try for the Hornets to narrow Murgon’s lead to 18-12.

But the Mustangs responded strongly, with tries to Trequaan Stanley and Nathan Roderick before the final siren. 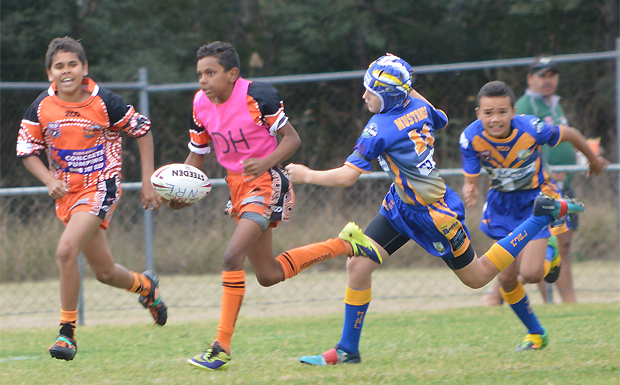 Cherbourg proved to be a handful when they had the ball 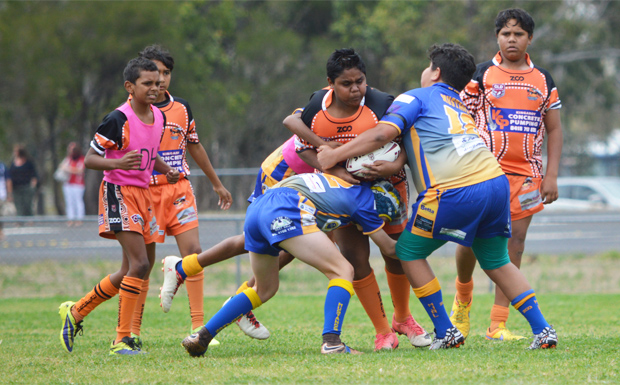 Strong defence kept the Hornets away from Murgon’s line 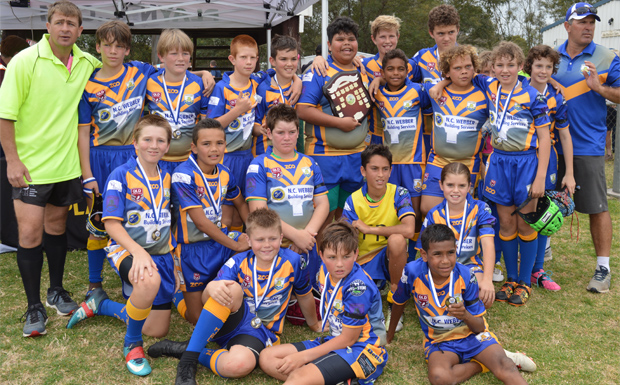 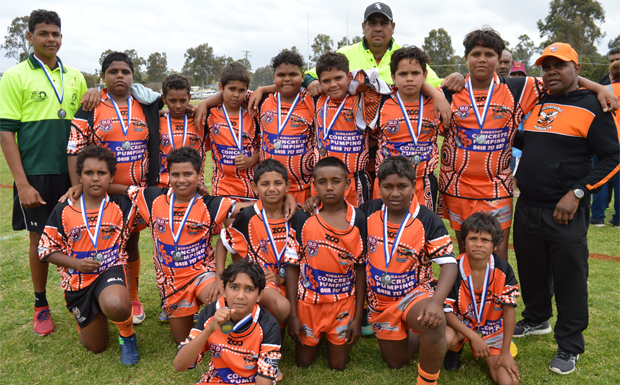 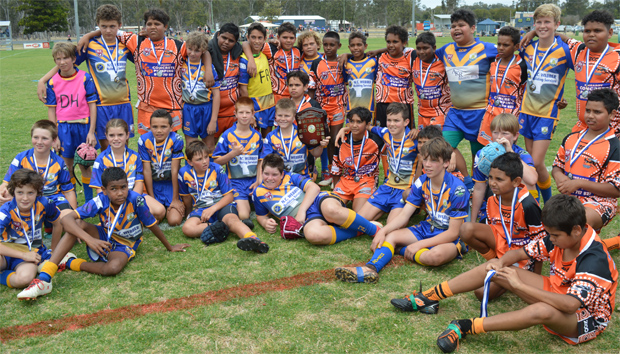 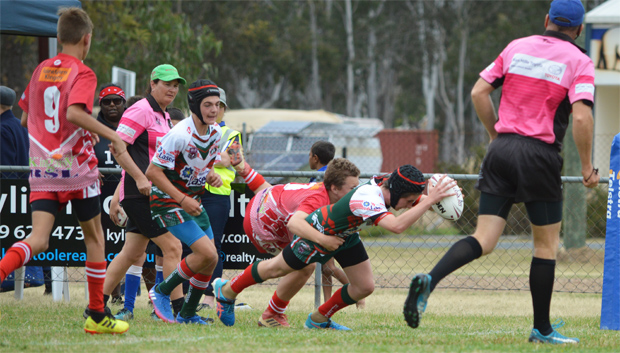 Thomas Roberts scores in the corner for the Chinchilla Bulldogs

Despite two tries by Harrison Brown – including a runaway effort down the sideline which duplicated his effort in the Major Semi-Final – Kingaroy weren’t strong enough to stop the rampaging Chinchilla Bulldogs in the Under 14s Grand Final.

Kingaroy finished the season on top of the ladder but had a tougher pathway into the main game; losing to Chinchilla in a semi and then having to conquer Central Burnett.

The Bulldogs brought a large group of fans with them to Nanango who were cheering wildly from the sidelines.

At half-time, they led 20-6 after scoring four tries back-to-back.

Kingaroy’s defence proved stronger in the second half but it wasn’t enough to deny the visitors victory. 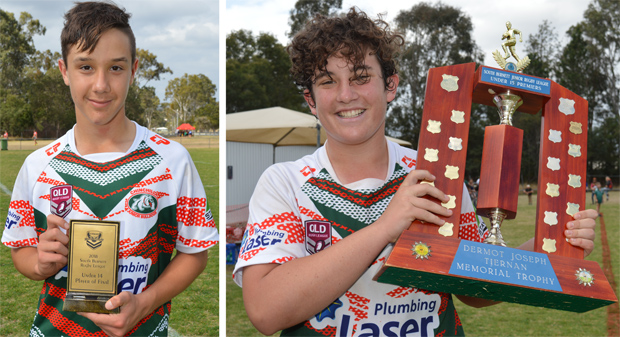 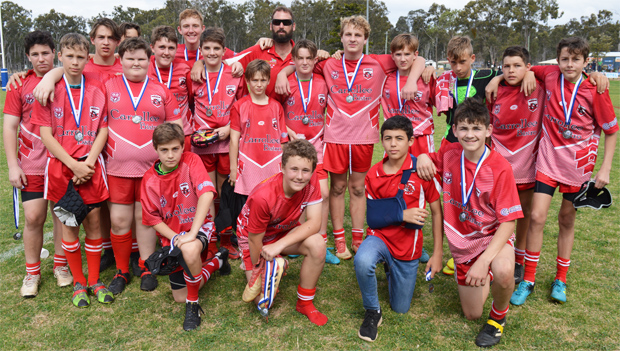 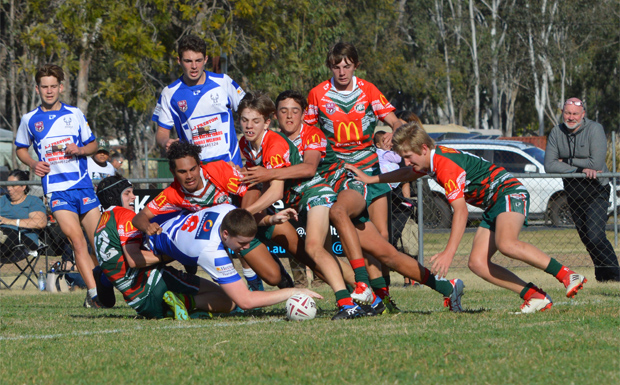 Chinchilla Bulldogs proved too strong in the second half for Nanango in the Under 16s Grand Final.

Nanango began the second half in the same fashion, blowing their lead out to 28-10.

But then the Bulldogs notched up five unanswered tries to finish the game 10 points in the lead.

Three minutes before full-time, the Stags put on a strong attack on the Chinchilla line, only to be called back. 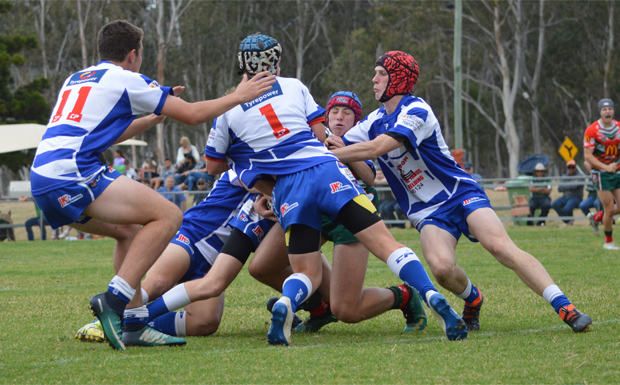 The Stags’ defence was strong, especially during the first half 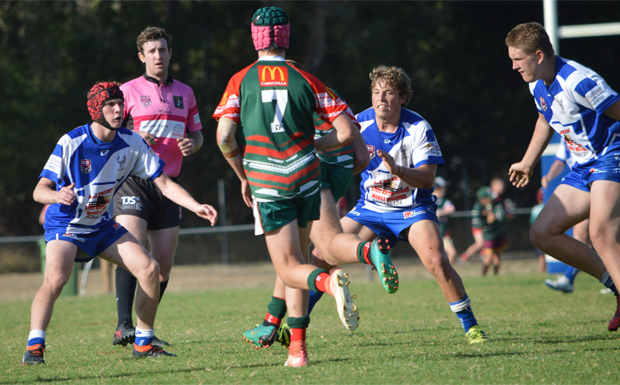 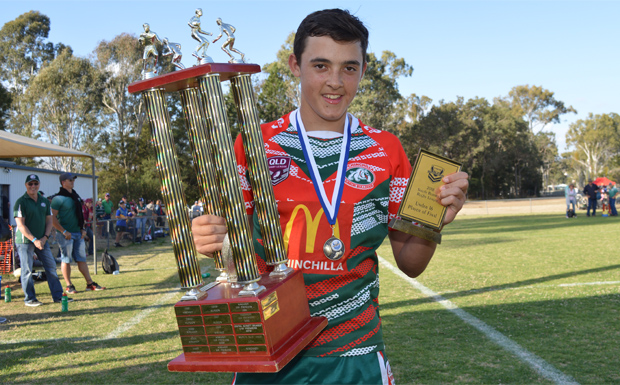 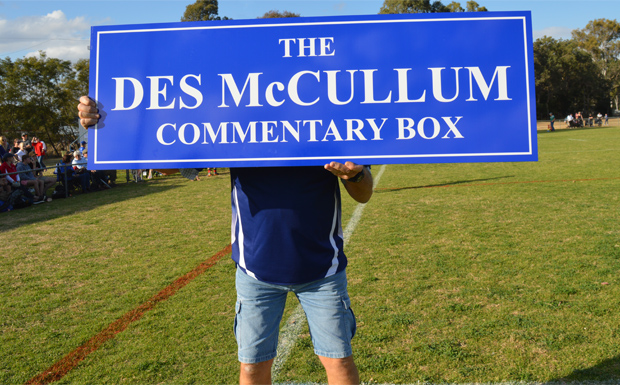 Former Stags player and long-time voice of Nanango rugby league Des McCallum said he would be calling his last game on Saturday, so the club announced the commentary box would be re-named in his honour (a bit more signwriting may have to be done …)

Stags Run On To The Field Red Ants and Stags’ players observed a minute’s silence before the start of the A Grade Grand Final for former Nanango player and club stalwart Bill Mulcahy … earlier in the day, a minute’s silence was also observed for long-time Murgon Mustangs’ supporter Irma Close