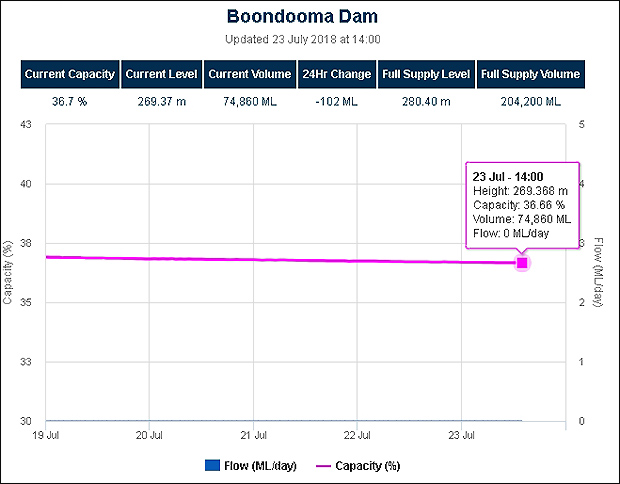 Boondooma Dam levels are slipping dangerously close to the cut-off level when irrigators will be banned from taking water from the supply.

The ban will affect avocado growers in the Blackbutt region who draw their water from the Boondooma pipeline as well as citrus growers and other producers in the Mundubbera area.

On July 9, irrigators were told by SunWater they would be able to use 24 per cent of their allocation for one month, or until the dam drops below its cut-off level.

Irrigators have emphasised an immediate solution to the problem would be for Stanwell’s Tarong power stations to start drawing water from the Wivenhoe Dam pipeline.

(Tarong’s allocations from Boondooma Dam – which was purpose-built to supply the power stations – have not been cut by SunWater.)

However, Mundubbera growers are also pressing for a permanent solution through the construction of a weir on the Boyne River at Cooranga.

Opposition Leader and Member for Nanango Deb Frecklington urged the State Government to turn on the Wivenhoe pipeline supply.

“Labor must look after farmers who draw water from Boondooma Dam,” she said.

“Labor must find a solution for these farmers and if that means turning on the tap from Wivenhoe to Tarong in the interim then so be it.”

She said an LNP government would investigate dam upgrades, including the weir proposal.

“Water security means job security and that’s why one of my key priorities is building dams,” Mrs Frecklington said.

“It’s clear a long-term plan is needed for water security – the Boondooma Dam is under pressure.

“An LNP government would immediately investigate dam upgrades such as a new weir.

“The LNP has already committed to get three dam projects shovel-ready and develop a new 30-year water security strategy.

“Labor must look after South Burnett and North Burnett farmers who rely on water from Boondooma Dam. There are several large avocado producers at Blackbutt who need this water, plus many irrigators along the Tarong-Boondooma pipeline.

“Our local towns also rely on Boondooma for drinking water, including Kingaroy and Blackbutt.

“Labor must find an urgent solution for this issue, and if that means turning on the tap from Wivenhoe to Tarong in the interim, then so be it.”

South Burnett Regional Council CEO Mark Pitt confirmed the town water supplies to Kingaroy and Blackbutt would not be affected by the imminent cut-off.

“Urban water supplies are considered high priority and a have a 100 per cent allocation,” he said.