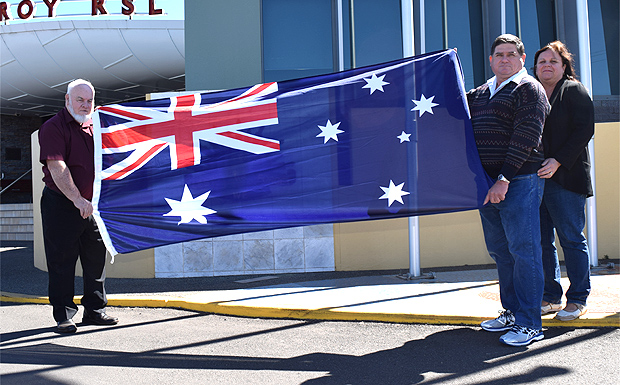 Kingaroy RSL president Don Davey with the flag that was carried on an F/A-18 Super Hornet against ISIS forces earlier this year ... he is pictured with Steve and Terri Gusthart whose son Danny arranged the special project with the help of the Australian Defence Force

A little piece of modern history was created on Friday morning when Kingaroy RSL formally accepted an Australian flag that was carried on a bombing raid against ISIS forces in the Middle East.

The idea came from Flight Lieutenant Danny Gusthart, who has been deployed as part of Operation Okra against ISIS in Iraq and Syria.

Danny, 28, attended Kingaroy State High School and after graduating was accepted into the Australian Defence Force Academy, where he was trained as an Air Traffic Controller (or as the RAAF calls it, a “Joint Battlefield Airspace Controller”).

Until 2016, Danny worked at the RAAF’s base at Garbutt, near Townsville.

Earlier this year he was posted to an Air Task Group in the Middle East where his duties included high level liaison with other allied air forces.

In February, Danny contacted Kingaroy RSL Sub-Branch via his parents Steve and Terri and suggested that if the RSL bought an Australian flag and posted it over to him, he could arrange to have it flown on an operational mission by an RAAF Super Hornet.

The Sub-Branch jumped at the opportunity, and president Don Davey and vice-president Warren Cockburn posted a flag to Danny soon afterwards.

The flag was placed in the cockpit of an RAAF Super Hornet being flown by a pilot, known for security reasons only as “Ben”, on an operational mission against an ISIS target.

“Ben was really excited about the opportunity as his grandfather flew a Beaufighter out of Kingaroy in World War II, so it’s great that the link is there for both of us,” Danny said.

“It means a lot to me to be able to save that piece of history and know that it will be displayed back in my hometown for everyone to see.

“It will be a great reminder of my deployment in the Middle East whenever I go back home to visit.”

On Friday morning, Danny’s proud parents Steve and Terri unfurled the flag outside the RSL in a small ceremony where it was formally presented to the Kingaroy RSL Sub-Branch.

Also presented to the Sub-Branch was the arming wire from a GBU-31 2000 pound bomb, and a certificate outlining the operation that day.

The RSL recently spent $400,000 to buy the property, next to the Ascot Motel, which will be used for offices and as a drop-in centre for veterans. 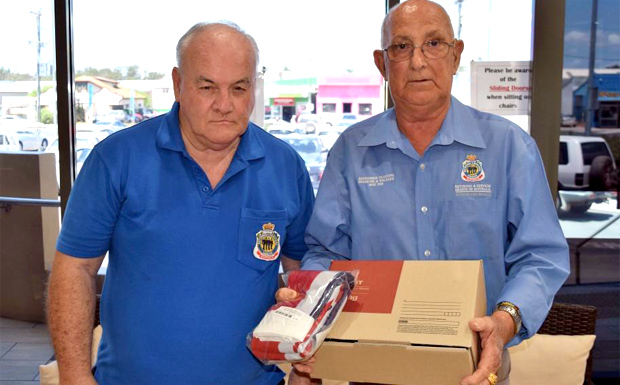 FLASHBACK: Kingaroy RSL President Don Davey and Vice-President Warren Cockburn packed the flag in February for shipment to an RAAF base in the Middle East (Photo: Kingaroy RSL) 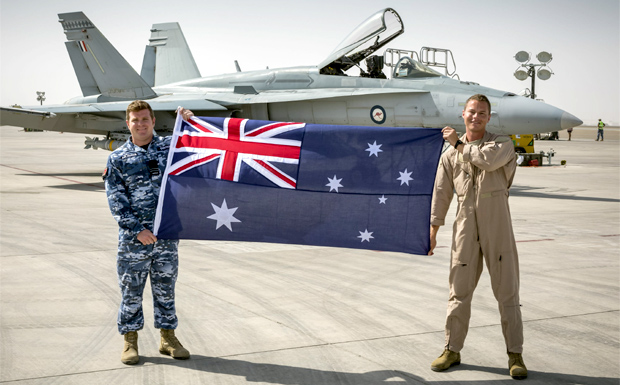 Flight Lieutenant Danny Gusthart and Flying Officer Ben from the RAAF's Air Task Group held up the flag after it arrived at the Australian base ... (Photo: ADF) 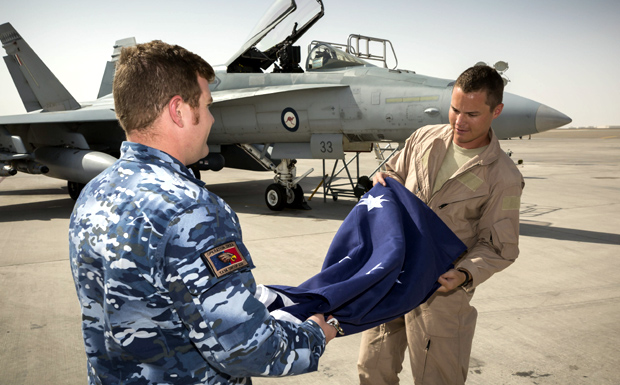 ... then respectfully folded it in preparation for its flight aboard the waiting RAAF F/A-18 Super Hornet (Photo: ADF) 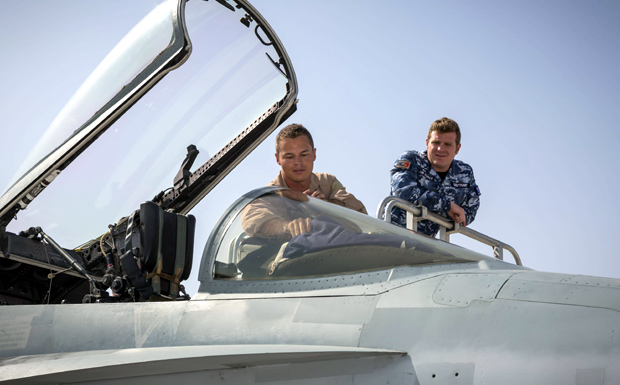 Flying Officer Ben stows the flag in the cockpit of the Super Hornet while Flight Lieutenant Danny Gusthart looks on; the flag was on board during a successful operation against ISIS forces
(Photo: ADF)