You’d Be A Fool To Miss It! 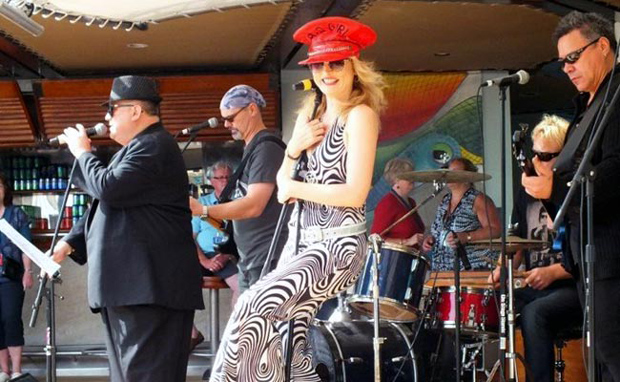 The Memphis Moovers were one of the headline acts at 2014's Wine & Food In The Park festival ... they'll be returning to provide the entertainment at this year's Kingaroy Show Cabaret Ball

This year’s Kingaroy Show Cabaret Ball will be held on April 1, and organisers say you’d be a fool to miss it.

The licensed ball is the traditional curtain-raiser for the annual Kingaroy Show – which is celebrating its 110th birthday this year – and it will be held at Kingaroy Town Hall from 6:00pm until late.

South Burnett Show Society president Cliff Seiler said the business community had really rallied behind the Cabaret Ball with generous support for advertising, printing and sponsorship for the event.

The incredible Memphis Moovers, who were last seen in the South Burnett at 2014’s Wine and Food In The Park Festival, will help keep everyone entertained with lively rock & roll, and a great meal can be included in the entry price.

Children under 12 are admitted free, but can get a meal for $10.

Tickets can be obtained in advance from Coppards Menswear in Kingaroy Street; Raine and Horne’s offices in Haly Street; from the Kingaroy Show Society’s office at the Kingaroy Showgrounds in Youngman Street; or by contacting Ros Tigel by email or on 0428-228-839.

To help plan the catering, meal tickets need to be booked by Monday (March 27), but non-meal tickets will be available at the door on the night.

Apart from dinner (which will be served at 7:00pm) and dancing (which will kick off at 8:00pm), the Cabaret Ball will also be running a raffle with more than $400 in prizes up for grabs.

Organiser Ros Tigell said this year’s ball will have a 1950s and 1960s theme.

Guests who dress to the theme will be in the running to win one of several Best Dressed prizes on the night.

Miss Junior Showgirl and Junior Rural Ambassador – for young people aged 12 to 17 – will be chosen from the floor on the night, and so will Miss Junior Prince and Princess, for children aged under 12.

“When we told people we’re holding this year’s Ball on April 1 they ask us if we’re kidding because that’s April Fools’ Day,” Ros said.

“But we tell them no, that’s the date and you’d be a fool to miss it, and everyone remembers it then.”

The South Burnett Show Society is still looking for entrants in this year’s Miss Showgirl and Rural Ambassador competitions.

Entrants for Miss Showgirl need to be between the ages of 18 and 28, and unmarried.

The Rural Ambassador competition is open to single or married women and men aged between 20 and 30.

The winners of Miss Showgirl and Rural Ambassador will go on to represent Kingaroy at the sub-chamber finals in June against other local Show Society winners.