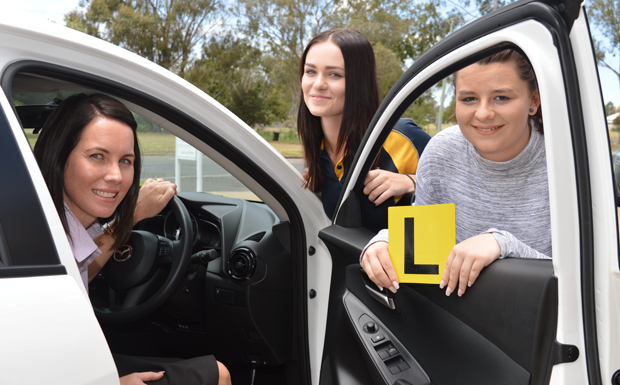 Bill Hull Car Centre dealer principal Jacqui Trace, seated, hands over the Mazda 2 to Tegan Krosch, from South Burnett CTC, and learner Karsha Pyke, from Nanango, who is keen to get on the road

Learner Drivers in the South Burnett will be able to get a helping hand to notch up their logbook hours thanks to a scheme launched this week by South Burnett CTC and Bill Hull Car Centre.

The Mazda dealership in Kingaroy has made a manual Mazda 2 sedan, valued at $17,000, available for CTC’s Learner Driver Mentor Program.

CTC CEO Nina Temperton said the program had come about after conversations with youth workers.

“There are young people who just can’t get their licence,” she said.

“That makes life impossible in a country area where there is no public transport.”

Currently learner drivers in Queensland must have completed 100 hours of supervised on-road driving and entered these details into an approved logbook.

This logbook must be assessed and passed by Queensland Transport before the learner can take the practical driving test.

CTC is also looking for volunteer mentors to join the program.

They will require a Blue Card, have had an Open Licence for at least one year, and have a good driving record.

Volunteers will be covered by CTC insurance.