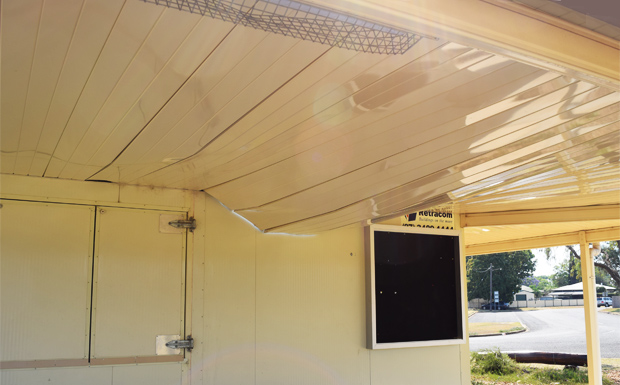 The damaged roof at the Kingaroy Redbacks building in Oliver Bond Street, Kingaroy

A 21-year-old Kingaroy man has been sentenced to seven months in jail for causing more than $2500 damage to the Kingaroy Redbacks clubhouse on Tuesday night.

Brenden Barry Foy, 21, was arrested by police early on Wednesday morning and pleaded guilty to a string of charges when he appeared in Kingaroy Magistrates Court later in the day.

Police Prosecutor Sgt Wayne Bushell told the court Foy jumped up and down on the roof of the junior football club’s building, causing the panels to sag and bend.

Foy also admitted damaging two perspex panels and ripping a loudspeaker off the roof and throwing it onto the ground.

He had been on bail on four other charges at the time of the latest incident.

Magistrate Simon Young sentenced him to seven months jail for the wilful damage at the soccer club, six months for entering the motor vehicle, and one month for stealing, to be served concurrently.

He was convicted and not further punished on the other wilful damage charge after he offered to pay $200 restitution for the broken window.