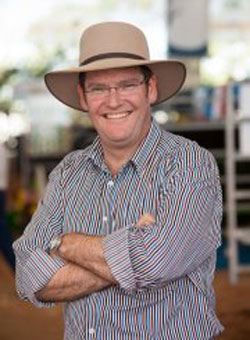 Mr McVeigh, who met with the beef industry representatives yesterday to discuss the status of the disease, said the government’s position reflected the industry position.

“The Newman Government has dedicated significant resources to manage the situation and Biosecurity Queensland is working with industry to retain our Protected Zone status for BJD,” Mr McVeigh said.

“Industry groups including AgForce, Cattle Council of Australia and the Australian Brahman Breeders’ Association are working with us to manage the situation.

“We have a very low prevalence of BJD in Queensland and it’s really important for industry that we maintain this status.

“Having a low prevalence of BJD facilitates exports and provides Queensland producers with greater market access than other parts of Australia that do not have protected status.”

“It’s important to note that only one property near Rockhampton has been confirmed as being infected with BJD, and on that property, only 3 head out of the 600 head herd have been confirmed with BJD,” he said.

“Movement restrictions are now in place on 150 properties that have received animals from the infected property.

“Each affected property will be assessed to determine the appropriate management and testing strategy to be undertaken.

“Sampling is being performed by Biosecurity Queensland field staff and private veterinarians.

“Affected producers can also use their own private veterinarian, however the veterinarian should first seek advice from Biosecurity Queensland about the sampling and testing process.

“Movement restrictions must remain in place until a property’s disease status can be resolved.

“We’re aware that movement restrictions are impacting affected producers and we’re working hard to resolve this situation as quickly as possible.”

“Testing is being undertaken by Biosecurity Queensland and should the need arise we have contingency plans in place to manage the volume of tests required,” he said.

“As the nature of BJD testing is complex it can take 12 weeks or more to obtain results.

“Biosecurity Queensland is in contact with Sydney University about a new diagnostic test they are developing.

“As soon as this new test is available and validated in the laboratory in Queensland, the Government will be able to start using the test.

“Producers should be assured that all possibilities are being considered.”

“All cattle producers, particularly stud breeders, need to continue to work closely with Biosecurity Queensland and their private veterinarians to ensure the program has every chance of succeeding,” Dr Symons said.

Affected producers who have been placed under movement restrictions by Biosecurity Queensland can apply for support under the National BJD Financial and Non-Financial Assistance Package.

This support is targeted at assisting them resolve their herd status.

Dr Symons said affected producers should not move or slaughter stock until they have discussed the options with Biosecurity Queensland.