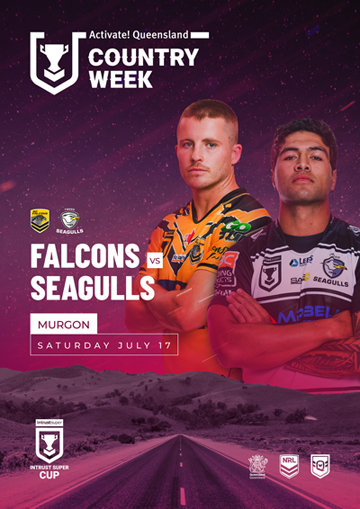 Rugby league fans should be making tracks to Murgon next Saturday when a round of Queensland’s InTrust Super Cup returns to the South Burnett.

The Murgon Junior Rugby League Club is hosting the “Activate! Queensland” Country Week clash between the Sunshine Coast Falcons and the Tweed Seagulls from 2:10pm at Murgon Showgrounds.

The in-form Seagulls are currently holding down third spot on the ladder but will be keen to dominate the Falcons.

Tweed are possibly still smarting from their 36-0 loss at home to the Falcons the last time they met, back in June 2019.

The game will also be broadcast live on Kayo Freebies

The big day at Murgon is being sponsored by local business, Gleich Contracting.

As well as the top-shelf InTrust game, there will be a full day of local league, including Under 6s to Under 12s, an Under 14s round robin, women’s games, an Under 18s game between the South Burnett Eagles and Pittsworth, and two South Burnett A Grade games: Kingaroy v Nanango, and Murgon v Cherbourg.

South Burnett Eagles’ junior players and their support crews have been kept very busy over the past two weeks at two big Zone carnivals.

The Zone 5 Under 35kg carnival was played at Roma during the first week of the school holidays.

The Eagles took on teams from Wynnum, Western Downs, McIntyre, Central Downs, Balonne-Barwon, Cunnamulla, Charleville and Roma in back-to-back league games across the week as well as a challenging athletics carnival. They notched up five wins, and missed out on the athletics crown by just one point!

Congratulations to South Burnett players Hudson Murphy, Mason Fuller-Sandys, Lakiri Renouf and Blake Cullen who were selected for the East side to take on West at the end of the carnival.

The Zone 5 Under 43kg carnival was played at Wandoan during the second week of the holidays.

Congratulations to South Burnett players Alex Farmilo, Mitchell Prain, Isaac Hauritz and Nate Needham who were selected for the Country side to take on City at the end of the carnival.

On June 26, two A Grade rugby league games were played at Wondai Sportsground, with players and spectators dodging showers.

The Wondai Wolves’ last home game of the season coincided with the annual Wondai Country Running Festival which meant crowds were down a little.

In the first game, Nanango 44 defeated Wondai 20 after leading 24-4 at half-time.

Wondai had a much stronger second half, in a sometimes fiery game.

In the second game, Cherbourg 44 proved too strong for Kingaroy 28, after the Red Ants led 18-16 at half-time.

The game was much closer than the final score indicated … with 12 minutes to go in the first half, the teams were locked at 12-all.

On June 27 at Dalby, the South Burnett Eagles were defeated 46-10 by the Dalby Diehards in Round 11 of the Toowoomba Under 18s competition.

On July 3, two A Grade games were played at Cherbourg.

In a close game, Murgon Mustangs survived a second half comeback by Kingaroy to be ahead 22-16 at fulltime.

The results of the second game, between Cherbourg and Wondai, are not available.

With school back, junior games will resume next weekend.

UPDATE July 12:  Results from Cherbourg at the weekend: