Tommy Stars In Under 14s

Kingaroy proved too strong for Nanango in the Under 14s rugby league game played at T.J. O’Neill Oval in Kingaroy on Saturday.

In Round 1 of the Toowoomba Junior Rugby League U16s competition, South Burnett Eagles drew 34-all with Toowoomba Souths at Gold Park in Toowoomba.

The Unders 15s weren’t so lucky at the same venue, going down 46-0 to Toowoomba Souths.

There was no A Grade or Under 18s  games played in the South Burnett last weekend due to the 47th Battalion carnival at Bundaberg. 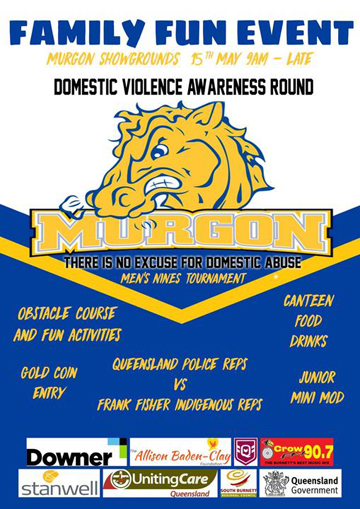 Murgon’s popular Domestic Violence Awareness Shield competition will be played at Murgon Showgrounds on May 15.

Entry will be by gold coin donation, and the event will involve teams from Murgon, Cherbourg, Nanango, Kingaroy and Wondai.

It will also feature the Queensland Police Rugby League team taking on the Frank Fisher Indigenous Central Division team in an exhibition game.

South Burnett Under 15s and Under 16s will also be in action on the day against Toowoomba Brothers, followed by the Stanwell 9s competition.

“Violence against women is at epidemic proportions. On average, one woman is killed every week in Australia as a result of intimate partner violence,” Murgon Club organiser Cole Cooper said.

“Murgon Junior Rugby League Club is dedicated to raising community awareness around this issue, and is committed to help break the silence around violence, using the sport of rugby league as a vehicle to increase this awareness.”

The DVA round will follow three days of workshops run by the NRL’s “Voice Against Violence” team and the Allison Baden-Clay Foundation visiting local schools and rugby league sporting clubs to deliver education around gendered domestic violence.

Retired International and State of Origin hero Gavin Cooper will be coming back home to Murgon, accompanied by Canberra Raiders legend Alan Tongue, for the carnival day.

“There will be plenty of activities, refreshments and food available on the day whilst the future stars, and current champions compete,” Cole said.

The day will be alcohol-free and organisers are welcoming everyone from the community to come and see the best the Burnett has to offer.

Saturday’s league games will be at Fred Kassulke Oval in Nanango.