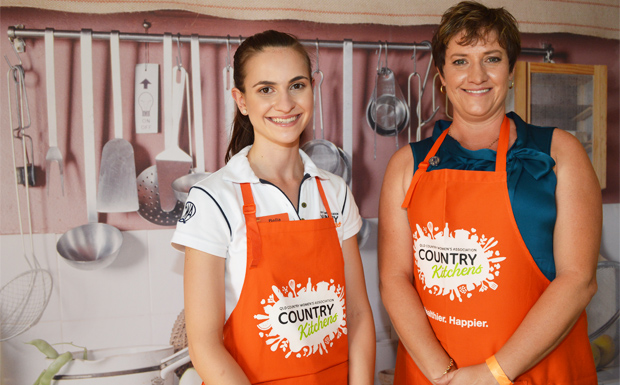 QCWA Country Kitchens nutritionist Bella Maugeri and Janelle Reeves, from Kingaroy, helped launch the Country Kitchens program in 2016 … it’s one of several innovations the QCWA have introduced over the past eight years since the Murgon branch closed

A public meeting will be held in Murgon next month to look at reopening the town’s QCWA branch.

Murgon QCWA closed its doors in 2012 when the branch’s ageing membership felt unable to maintain its building.

It followed Cloyna, which closed in 2008 when that branch faced similar problems, and the Yarraman and Blackbutt branches, which shut in 2010.

An attempt was made to revive all four branches in 2014, and it was partially successful.

That group has since gone on to become a valued part of the Timbertowns community, providing welcome catering at many community functions as well as a fun social outlet for members.

But numbers in Murgon and Cloyna were insufficient to revive those branches, so the Murgon building was made into a divisional headquarters.

Monthly Zone 1 Division meetings have been held there ever since, which has helped ensure the building has been maintained.

Zone 1 representative Lois Thurecht told southburnett.com.au the Division thought it was time to see if the Murgon branch could be revived again.

“A lot of new people have moved to Murgon over the past six years,” Lois said.

“Murgon is now the only major town in the South Burnett that doesn’t have a QCWA branch.

“But if there are 10 or so women who’d like to start one up, we’d be only too happy to help them do it!”

Lois said the QCWA had introduced many popular new programs since 2012.

These included the Country Kitchens cooking classes – which teach time-honoured recipes to students – and in Kingaroy, a Twilight Branch that meets in the evenings to cater for working women and busy young mums.

“Exactly where and when a Murgon branch would meet is something that members would decide themselves,” Lois said.

The public meeting will be held at the Murgon QCWA Hall in Macalister Street on Saturday, March 14, from 10:00am to about noon.

Women who can’t attend but would be interested in finding out more information can phone Lois on 0407-965-094.