South Burnett’s About To Go Pink 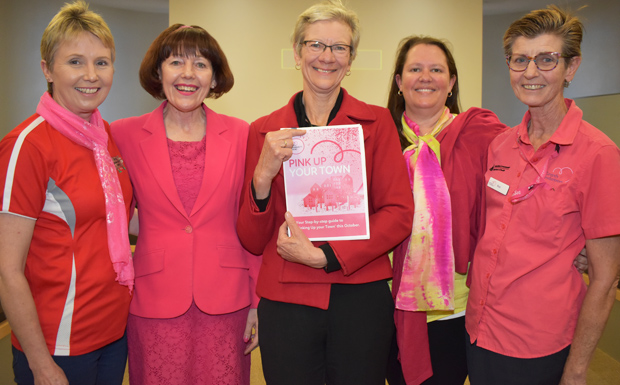 There’s going to be a lot of pink about in the South Burnett in November when a special breast cancer awareness campaign spreads from one end of the region to the other.

“Pinking Up The South Burnett” is a regional version of the McGrath Foundation’s “Pink Up Your Town” annual campaign which raises funds for breast care nurses as well as awareness about breast cancer.

“Pinking Up The South Burnett” will run from November 1-11 and organisers hope to encourage “pink” events run locally in every town.

The team held their first “campaign meeting” in Kingaroy on Wednesday, swapping notes about what events have already been planned to “pink up” the area.

Organisations such as the Nanango Tourism and Development Association, the Yarraman Progress Association and Coverty Creek Community Development and Social Club already have their thinking caps on.

“When people hit Blackbutt we want them to see pink all the way through the area,” Sue told southburnett.com.au

Events already scheduled include a Pink Lady ceremony in Kingaroy on November 6, followed by Pink Ribbon breakfast on November 7.

A “Pink-nic In the Park” will be held in Proston on November 2 which will include Pink Stumps cricket fun.

As Melbourne Cup Day falls within the “pink period”, organisers hope to see a lot of pink fashions out and about.

Sue said that at the moment she had 120 clients in the South Burnett, many of whom had been diagnosed after having free mammograms when the Breast Screen bus visits.

But at the moment, only 56 per cent of women were taking advantage of this service … which is why more awareness activities had to take place.

Sue said there were 18,000 new cases of breast cancer diagnosed in Australia last year, including 150 men.

At the moment, there were 135 breast care nurses – who support people with diagnosed breast cancer – in Australia, but it had been estimated there was a need for at least another 120.

“We want it so every Australia woman can access a breast care nurse,” Sue said.

“We try never to turn anyone away.”

southburnett.com.au will publish details about the “Pinking Up The South Burnett” events as they become available.

2 Responses to South Burnett’s About To Go Pink