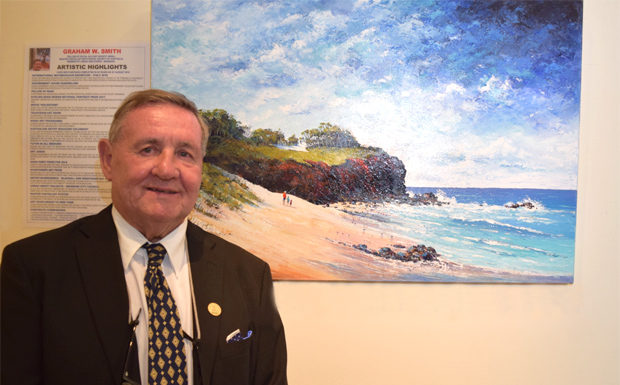 Graham Smith’s new exhibition, ‘Burnett and Beyond,’ takes centre stage at the Wondai Regional Art Gallery in September … one of three exhibitions on show this month

An artist who once swapped an Italian cafe owner four beers and a freshly cooked pizza for a picture of the cafe is this month’s featured artist at the Wondai Regional Art Gallery.

Graham Smith, who has been a Master Pastellist since 2004, is exhibiting “Burnett Beauty and Beyond”, the third in a series of exhibitions that have featured Queensland locations, including the Lockyer Valley and Texas.

Graham’s works fill the walls of the main gallery and many feature well-known local scenes, such as the nearby Wondai Hotel after a rainstorm.

Speaking at last Friday night’s exhibition opening, Graham said he had spent months travelling around the South Burnett painting the region’s vistas because he knew he’d be exhibiting in September and wanted to present some works local residents could immediately relate to.

Others were painted on a trip to Italy last year, or during his many travels to other places.

Graham said the painting-for-pizza swap came about after he set up his easel in front of a cafe in Fabriano, Italy, to paint some nearby buildings.

He had been invited to exhibit at the ‘Fabriano in Acquarello’ convention, where his work was displayed in the world’s largest watercolour event alongside 1400 paintings by artists from 70 countries.

When the cafe opened later in the day, the owner asked if Graham could move so the cafe’s outdoor tables and chairs could be set up.

While the two were talking, the owner saw a painting of the cafe Graham had completed earlier in the day and asked how much it would cost to buy.

But it quickly returned when Graham suggested the pizza-and-beer swap instead.

Graham, 75, is an accomplished professional artist and a Fellow of the Royal Queensland Art Society. He was a finalist in the National Portraiture Prize and has been flown all over the world for workshops, exhibitions, study tours and conventions.

During his 60-year career he has also won 164 first prizes in the 453 art awards he has contested.

He aims to complete 3000 works before he hangs up his brush.

This month, he’ll also be free doing demonstrations of his techniques at the Wondai Gallery from 10:00am to 2:00pm each day until Sunday, September 15.

Shaz, who won first prize in the ‘Any Other Medium’ category at last year’s South Burnett Art Competition for her work ‘I Love A Sunburnt Country’, said she pursues art as a way to take her mind off the stresses of life on the airwaves.

The exhibition features some of her most recent works, as well as a few older pieces from her archives.

Delwyn is a self-taught photographer with an aptitude for capturing breathtaking landscapes.

Her works cover everything from seascapes to bushland.

In the rear gallery, Jan Meiers is displaying cross-stitch, a form of craftwork not often exhibited in the region.

Jan’s works can take anything from hours to months to complete, depending on the complexity of the design.

Her works are accompanied by acrylic canvases painted by her husband, who also enjoys art, and the pair have dubbed their exhibition ‘Mixed Media’. 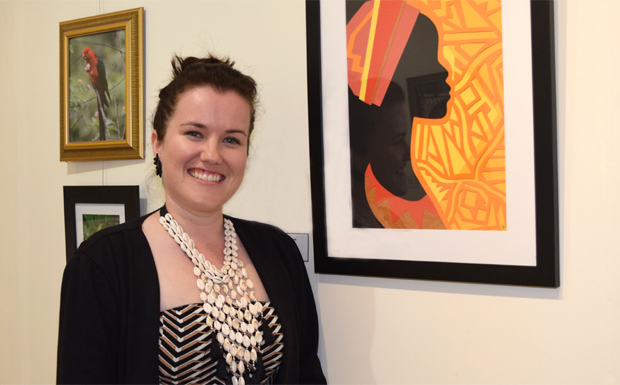 CROW-FM announcer Shaz Birkett is displaying recent works at the Wondai Regional Art Gallery this month, along with a photography exhibition by her mother Delwyn 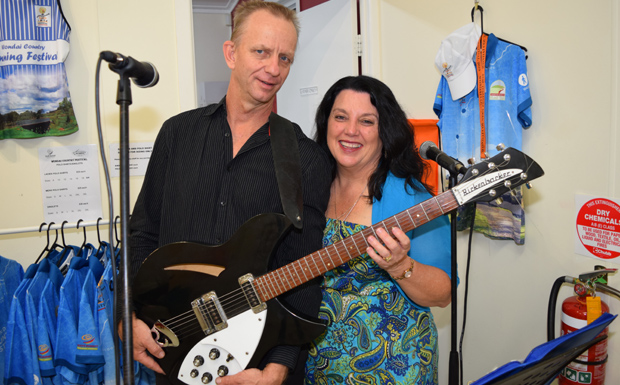 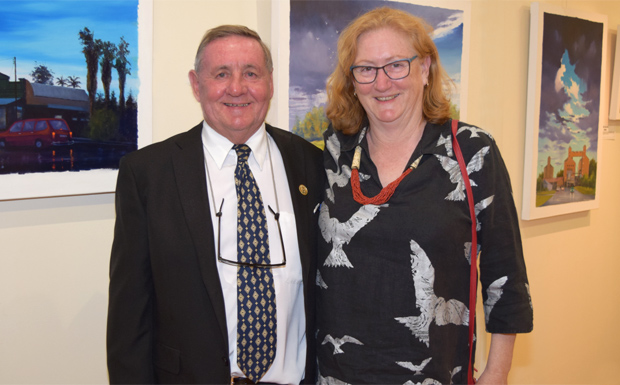 Graham Smith was congratulated on his exhibition by South Burnett artist Karol Oakley; Karol is also a Master Pastellist and travels extensively in Australia and internationally to exhibit her works 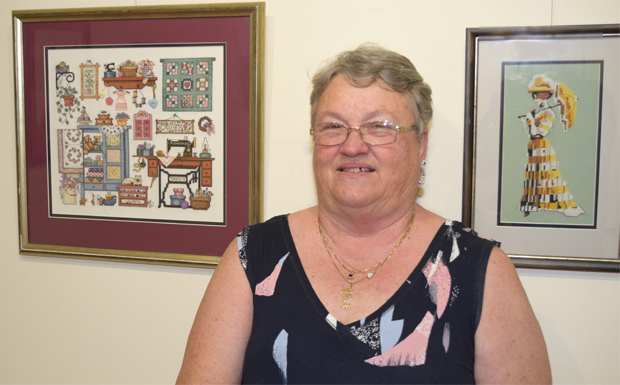