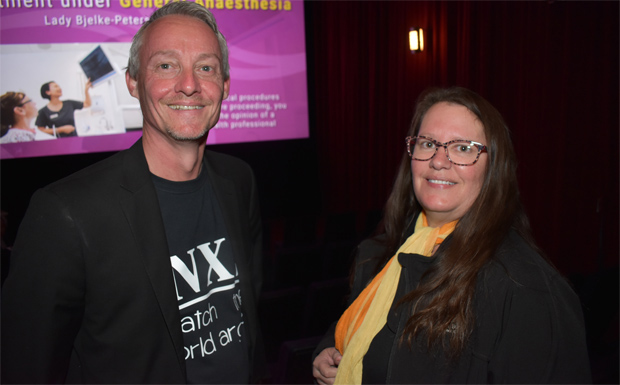 Kingaroy Cinema’s main theatre was packed to overflowing on Monday night for the special charity screening of the Michael Hutchence biopic, “Mystify”.

The movie night was organised by Kingaroy resident Simon Neal as a fundraiser for the South Burnett Suicide Prevention Working Group.

A total of 86 people bought tickets for the screening, meaning they spilled over into Cinema 2 after the opening ceremony.

Hutchence, the lead singer of rock band INXS, tragically died at age 37 in 1997 at the height of his career, the night before embarking on a world tour.

The movie night came together with sponsorship from Stanwell and the assistance of the Kingaroy Cinema, local media, Nichols Printing and South Burnett Arts Inc.

An important message – to reach out if you need help – was shared by several speakers before the movie began.

With a road accident, they could usually work out what had occurred but when people took their own lives, they had no answers.

He said police had to treat the deaths as suspicious until they could proven otherwise, which was stressful for the families involved and took a toll on the officers.

Snr Sgt Tierney admitted he was amazed by the local suicide statistics.

“The further you go west, the older they become; and the people who are taking their lives are generally men … a lot of it’s in the rural industries and it’s people you don’t think… I’ve lost count of how many police officers I’ve known who’ve taken their lives and it’s always the last person you’d pick,” he said.

“We have got to get rid of that stigma so people come and ask for help.”

Cr Danita Potter, from the South Burnett Suicide Prevention Working Group, said the group was trying to promote the resources which were available to help people around the area – but it also needed help from the public.

A young mother then shared her story of surviving a suicide attempt during the past 12 months which occurred after a marriage break-up and her dark belief the world would be better off without her.

She had since received help from counselling and medication.

“If you’re in that place, just ask for help,” she said. “There’s help out there. If you don’t feel comfortable talking to someone that you know, there are people out there; there are resources out there that are free that you can tap into to talk to someone.

“Because you have worth and you belong here.

“If you notice something with a friend or family member or someone you work with … it won’t hurt just to ask how they’re going. Just knowing that someone cares about them might make a difference.”

To reach out for help, phone: