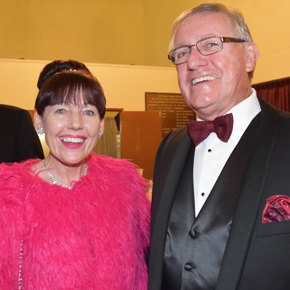 Mayor Keith Campbell says more than $40,000 was raised to support the Red Earth Community Foundation at his recent charity ball.

The Mayor told southburnett.com.au he was very pleased with the result.

Although the final figures were still being counted, the total would be more than $40,000.

Kingaroy Town Hall was packed with 350 guests on June 8 for the glittering event, which also featured an auction and raffles.

The Red Earth Community Foundation runs annual leadership programs in the South Burnett as well as ongoing skills-building workshops for program alumni and other community members.

The course is run in conjunction with Vision 21 and includes two residential modules held at the Bunya Mountains.

It is designed to give participants an insight into leadership styles and personality types as well as building personal and business networks to help strengthen the viability and sustainability of local communities.

More than 100 people have gone through the program since it began in 2014.

A video by Torkit Business Solutions about Red Earth was shown at the Mayor’s Ball: