Col Would Have Been Delighted 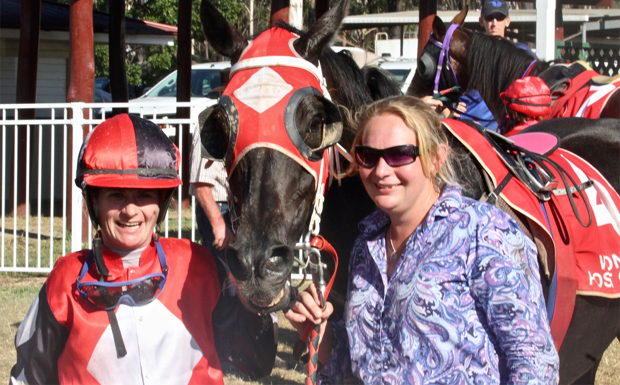 Kelly Gates, Ascot Bound and Kristen Wenck were all pleased with their efforts in the Col Ryan Memorial at Wondai (Photo: Ross Stanley)

The Domesday gelding, having just his second run in more than six months, was only a short neck shy of collecting the runners-up cheque.

However, the prize money was a secondary concern.

The six-year-old is trained by Col Ryan’s granddaughter Kristen Wenck.

She is in the horse’s ownership as is her husband Bodie Roon and her parents, Jeff and Narelle Wenck.

Odds for his previous three essays ranged from $81 to $151 and he raced accordingly, so Kristen did well to prepare him for what was a sentimental journey.

Sadly, luck was not with the team on the day: Stewards reported that Ascot Bound was hampered shortly after the start and lost ground.

On the other hand, Supervisor (Adin Thompson), the $1.80 favourite from Harry Richardson’s Toowoomba yard, did not have to go outside a rival for the entire 1465 metre trip.

The son of Dane Supreme jumped well from the inside stall, camped on the fence behind the leaders, got a split near the home turn and scored easily.

Kym Afford’s charge suffered from its outside barrier draw and was trapped wide in the run before battling on determinedly.

The Weekend Wash Up

Meanwhile, the Wondai form was franked at Thangool on Saturday by mares from Bevan Johnson’s Miles stables.

Money Ad, winner of the Wondai’s Warana Hotel Motel BM 60 Handicap and Spot On, third in the Project Water QTIS Maiden Plate, both went on to prevail at the northern track.

Glenn Richardson, the Nanango trainer who had been rewarded with third money for Arnwood’s game performance in the QTIS event for juveniles at Doomben a week earlier, picked up the first prize of $11,650 with Avalanche Warning (Madeleine Wishart, $17) in the Class 2 Handicap (1060m) at Kilcoy on Sunday.

The consistent mare by Black Caviar’s brother Moshe had put the writing on the wall with a close fourth at Ipswich at her previous engagement.

Fort Myer (Maurice Crawford, $8.50) is overdue for a change of fortune.

The Arlington gelding finished second in the Class 4 at Kilcoy for Scott Pedron’s side.

That result came on the heels of a sound fourth to Richardson’s entry Schindler in a Dalby 0-55 event on January 11.

There should be plenty of South Burnett interest in next Saturday’s Bundaberg fixture.

Its popular “Pink, Pink and More Pink” race day is scheduled for February 16, a date that falls just two days after Valentine’s Day.