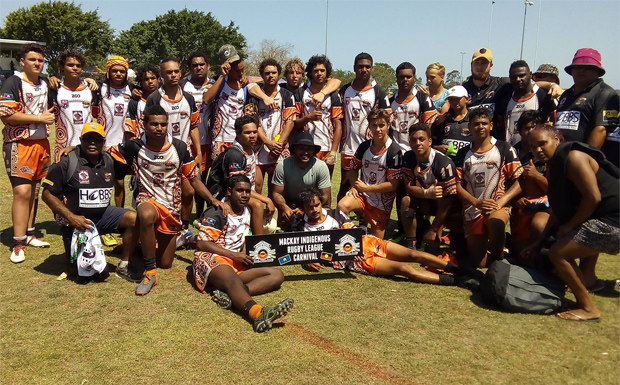 Cherbourg returned home as runners-up after a big weekend of football at Mackay
(Photo: Dynevor family)

A team of young footballers did the South Burnett proud at the weekend, earning a spot in the Grand Final at the Mackay Indigenous Rugby League carnival.

The U17s team consisted of Cherbourg Hornets players as well as non-Indigenous players from Kingaroy and Nanango.

It was put together as a memorial side to honour Hornets junior Triston Murray who died in September last year.

Triston’s father Jeffrey Dynevor helped organise the team’s participation but there was also a big effort by friends and family members in Cherbourg and elsewhere.

“Thank you the people who bought raffle tickets, burgers and munchies that helped pay for expenses,” Jeffrey said.

“Thank you to Cherbourg Council and the shops in Murgon, Wondai, and Nanango for your generous donations that paid for our accommodation, travelling expenses and strapping gear.”

The team began the carnival on a winning note, with a 38-0 win over Nagoa Natives on Friday afternoon.

This victory proved critical in the end, earning Cherbourg a place in the quarter-finals on for / against after they suffered close losses to NQ United and Magpies United on Saturday.

Cherbourg downed NQ United in the quarter-final on Saturday afternoon, and then scored a close win over Which Way Croc Way (Sarina) in the semi to earn a spot in the Grand Final.

They faced Magpies United in the Grand Final but the home team eventually proved too strong for the visitors.

Lavinia Dynevor told southburnett.com.au the players should be very proud of their efforts.

“They made us proud for the community,” she said.